A deal with the devil

In "Mephisto," a movie that takes place in Germany during the rise of Nazism, there are many insults, but the most wounding is simply the word "actor"! It is screamed at the film's hero by his sponsor, a Nazi general who is in charge of cultural affairs. We stare into the actor's face, but are unable to determine what he is thinking, or what he is feeling. Maybe that is what makes him a great actor and an ignoble human being.

The actor is played by Klaus Maria Brandauer, in a performance of electrifying power; he makes us intensely fascinated by his character while keeping us on the outside -- until we discover there is no inside. He plays an actor named Hendrik Hoefgen, but even that's not quite right; his real name is "Heinz" until he upgrades it. ("My name is not my name," he says to himself, "because I am an actor.") Hoefgen bitterly reveals early on that what he hates most about himself is that he is a "provincial actor." Eventually he will become Germany's most famous and admired actor, and the head of its State Theater, but that progression is in fact a descent into hell.

We should begin by noting how particularly "Mephisto" (1981) makes its details vivid: The look and feel of the theater, the rise of the Nazi Party from the 1920s through the 1930s, the Berlin social life that was itself a stage. The film's Hungarian director, Istvan Szabo, demonstrates that the Nazi uniforms themselves seemed to transform some people into Nazis, just as costumes and makeup can make some actors into other people. The uniforms are deliberately fetishistic; to wear them is to subjugate yourself to the system that designed them. And we sense the sadomasochistic undertones that helped seduce a ruling class into a system of evil.

The film opens in Hamburg, where Hoefgen is involved in a small-time theater scene that is later described as communist, bourgeois, decadent -- everything but National Socialist. Consumed with ambition, he throws himself into his work with abandon. During a meeting to discuss the props for one production, he hears the words "lamppost" and flies into a manic fury, declaring that the lamppost, and the exploited worker woman who stands beneath it, symbolize all that is rotten with Germany. He leaps from the stage into the auditorium, screaming that the lampposts will not be confined to the stage but will extend into the orchestra! -- the dress circle! the entire theater! -- as their revolutionary spirit unites actors and audience. The others look at him with astonishment.

Of course this is all acting, posturing, calling attention to himself. Hoefgen as played by Brandauer has not a moment's self-doubt as an actor, although as a human being, he is nothing but doubt, fear and abnegation. He is ruled by ambition. His first wife is the daughter of a powerful man. When the man falls from grace, the wife is divorced. His early friends are left wing; later he drops them, forgets them or tries to shield a few from the Nazis as a gesture toward his abandoned ideals. On the day of Hitler's election, a left-wing friend asks him to join a protest movement in the theater. He can't accept, and he can't refuse: "I'd rather stay with the reserves." In fact, his early beliefs are the same as his later ones; he goes from the far left to the far right without the slightest difficulty, because he never believed anything in the first place.

Having not seen "Mephisto" since the early 1980s, I came back to it again thinking it was an anti-Nazi film. Not entirely. The Nazis are simply ... opportunists. Hoefgen wants to be famous, rich and admired. He purrs at praise like a cat given cream. He can discuss with himself the rights and wrongs of his situation, but it is a strategic discussion, not a moral one. All of his romances and marriages are designed to further his career, except one, which begins in Hamburg and continues unbroken into his Berlin days as the favorite actor of the Reich. This is his affair with Juliette (Karin Boyd), who had a German father and an African mother, and as a black woman, violates all the twisted Nazi theories of racial purity.

It bothers Hoefgen not at all that he is both a Nazi puppet and a black woman's partner because his feelings for Juliette are not love -- and not even lust, I think, but a certain enjoyment of the way she understands him. She has his number. They can never be seen together in public, but in her boudoir, she freely insults him. He is such a bad actor, she says, that he can't even drink a beer like a man who wants to drink a beer. And later: "Sometimes your cold, cheating eyes are those of a sad child." How does he respond to that? Almost as if it is a compliment. He looks in a mirror to see if it is true!

The key to Hoefgen's rise is the cultural czar of the Reich, referred to only as the General (Rolf Hoppe). He is oddly attracted to Hoefgen, and sees to it that the actor's leftist past is erased, he gets the best roles, he rises to lead the State Theater. The General is well into middle age, well-fed, warm, with a pleasing smile and a feminine seductiveness when he pays compliments. All until his brutal speech that ends with the word "actor!" Hoppe's performance is the ideal counterpoint to Brandauer's; the actor plays every role to please, and the Nazi pleases only himself, whatever it may seem.

Hoefgen's great role is Mephistopheles, the devil. In a mask of stark white makeup, he tempts Dr. Faustus in the classic German drama by Goethe. "My Mephisto," the General calls Hoefgen fondly, over and over again. It is a rich irony, since the General is in fact playing the Mephistopheles role and throwing the world at Hoefgen's feet. Szabo illustrates this contrast in a remarkable scene. Between acts of "Faust," Hoefgen is asked to visit the General's box in the theater. He does, in full makeup and costume. Below, the theatergoers turn and look up as the satanic figure with his red-lined cape hovers smilingly over the Nazi in full dress uniform. Szabo ends this interlude with a shot, held just long enough, showing the entire audience standing transfixed. They have witnessed the devil calling on the state.

In the energy they bring to the film, Brandauer and Szabo have made a mighty statement, but it is as much about acting, I think, as Nazism. In Hoefgen, we see an empty man, standing for nothing. This doesn't even bother him. In Paris as a spokesman for Nazi cultural affairs, he reunites with Juliette, who begs him to defect to the West. Later, on the street, he breathes the air of France with that smug contented smile and says to himself, "What could I do here? Freedom? What for?" Then he descends into the black pit of the Metro.

The lineage behind the story is interesting. Szabo adapted a satirical novel by Klaus Mann (son of Thomas), whose mother was a Jew and whose German citizenship was stripped away in 1933; he later became an American citizen. His book was said to be inspired by his brother-in-law Gustaf Grundgens, an actor and Nazi collaborator. Szabo himself (born 1938) is a leading Hungarian director; his credits include "Confidence" (1980), "Colonel Retl" (1985) and such English-language films as "Sunshine" (1999) and "Being Julia" (2004). "Mephisto" won the Oscar for best foreign film of 1981, and richly deserved it.

As a physical production, the film is breathtaking. Szabo makes the General's office a throne surrounded by empty space. He creates elegant party scenes at which the connected people gossip about one another; they climax with a spectacular celebration at the Grunewald hunting lodge. Huge swastikas turn ordinary buildings into fearful ones. The mechanism by which some people are exiled and others "disappear" is condensed into brief, fearful automobile rides. No effort is made to depict Hitler or German militarism or large-scale persecution of the Jews; all that takes place offstage, considering that the stage is Hoefgen's life. And Szabo ends the film with a visual masterstroke in which Hoefgen is able at last to have the limelight all to himself. 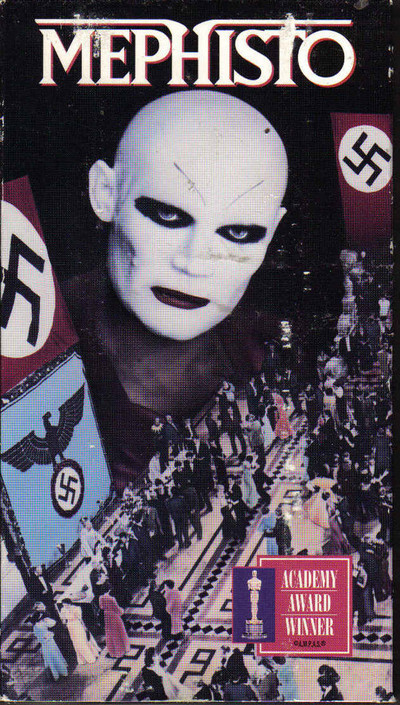