Creative artists, particularly those working in what some academics still call "the plastic arts" have this understandable tendency to write themselves into their visions of the apocalypse. I guess everybody who imagines the end of the world prefers to imagine him or herself as the, or one of the few, survivors of that end. Scarcity and other challenging conditions will prove a test of one's mettle, and one's mettle almost always is up to snuff when it's being tested in the imaginative realm. Except when you need to make a really crucial point, at which time you are permitted to imagine your own failure, and then imagine it somehow being righted.

I am probably indulging in a rather obnoxious form of criticism-as-parlor-game-psychotherapy by positing that each of the three main white male characters in director Denis Henry Hennelly's "Goodbye World" is meant to represent a facet of the director himself. Unfortunately, such activity is about all the movie is any good for, so let me continue a bit. The bearded, can-do, sustainable-living, hipster-turned-hippie played by Adrien Grenier (himself something of a "BCDSLHTH" in real life) seems meant to depict Hennelly's biggest and best, and yet poignantly fallible, self. The one-time activist who's done hard time, played by Marc Webber, is maybe who Hennelly would LIKE to be. And the down-to-business, lifestyle-fussy yupster Nick (Ben McKenzie) is who Hennelly has to pretend to be in order to get incoherent, solipsistic, speciously socially-charged projects such as "Goodbye World" financed in the first place. In any event, none of these characters really work as either representations of ideologies or human beings, and none of their female counterparts, despite the fact that the movie was co-written by a woman, are convincing, nor depicted in a context in which they're anything other than reactors at this party.

What party, you ask? Why, as the title suggests, an end-of-the-world party. As a text reading, "Goodbye World" hits every cell phone in the U.S., and a power shut down follows, a bunch of Grenier's old frenemies converge on the deep-woods, solar-paneled house he shares with his wife and outwardly adorable moppet daughter. Despite the fact that an actual apocalypse seems imminent, the pals bicker and banter and get stoned in "Big Chill" style. (The filmmakers have acknowledged "The Big Chill" as a key influence. I suppose a future historian will note that Generation X and Yers consider the breakdown of civilized life to have been equivalent, on an emotional level, to what funerals had been to Boomers.) Certain tensions from the past emerge, and a younger woman's disdain, combined with the incendiary influence of some rogue National Guard guys, add "interest' to the plot line. It is also typical of Henelly's ostensible self-critique that it maintains the only thing worse than he and his own peers are YOUNGER PEOPLE—nice one there, guy. Nobody's ever thought of that before.

Anyway, the potential desperation to survive alternates with remarkable self-centeredness—when one female character tells her husband she wants a divorce, she doesn't even add, "if we live." A black male character winds up bringing a nearly entirely new meaning to the term "token" when he drops the literally amazing third-act plot twist, and characters drop lines like "there's a little thing called the Constitution" with such regularity that the movie builds a slightly Ed Woody flavor. This is dissipated to a certain extent by its extremely professional look—in the technical department, "Goodbye World" is very much a real movie—and by the commitment of the actors. It's a testament to SOME kind of skill that one of them can deliver "You two idiots…destroyed the world?" an anything other than a laugh line. 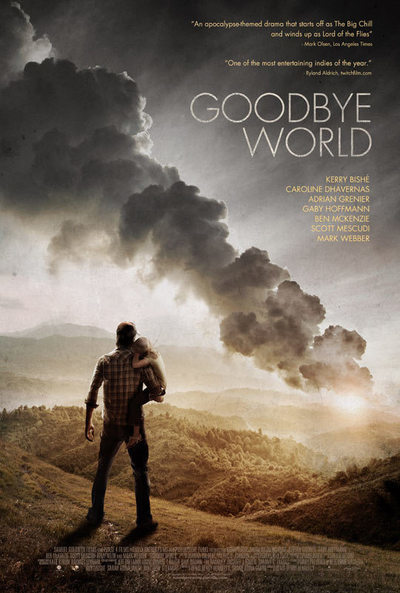