The PG-rated literary biopic “Goodbye Christopher Robin” might sound like a perfectly fine choice for family night at the movies, given that it is in large part an origin tale about that beloved ursine superstar Winnie-the-Pooh. For anyone who has read aloud A.A. Milne’s sing-song wordplay to sleepy tykes at bedtime, the film’s title likely summons visions of a honey-craving bear, a sweet-natured piglet, a sullen donkey and an energetic tiger bouncing alongside their pint-size human pal—inspired by the author’s own son—as they share adventures in the 100 Acre Wood.

Some of that sun-dappled, tree-canopied cavorting in a picturesque English countryside is glossily re-enacted complete with a sweeping Carter Burwell score in "Goodbye Christopher Robin." That way, we learn how a little boy and his cuddly toys captivated the imaginations of both young and old around the globe in the children’s books written by Milne more than 90 years ago.

So why did the girl of grade-school age a couple seats down from me go from happily (and noisily) consuming the remains of her concession drink through a straw to outright bawling during the movie’s final manipulative moments before being led out by her concerned adult companion? Possibly, the script's awkwardly intertwined thematic threads depicting the power of make-believe, the loss of childhood innocence, and the scars—both physical and mental—borne by those who serve on the battlefield, along with the teasing possibility of a major character’s death, did the trick.

You would think that generations weaned on Disney’s litany of animated demises from Bambi’s mom to Simba’s dad in “The Lion King” would be able to handle the depiction of personal loss in fictional form. But it is all in the telling, and “Goodbye Christopher Robin” never quite reconciles its whimsical upbeat passages with its gloomy downer portions. As the script by Frank Cottrell Boyce and Simon Vaughan seesaws between the mirthful and the morose, Winnie fans are ultimately made to feel uncomfortably guilty for their warm fuzzy feelings about the bear. It‘s as if we are somehow complicit in the events onscreen that caused pain to the actual Christopher Robin, who preferred to be called Billy Moon—the Milnes are big on nicknames—as a way to distance himself from his constant nagging shadow of an alter ego.

Director Simon Curtis has previously delivered such middlebrow, fact-based crowd-pleasers with a pinch of edge in the form of showbiz saga “My Week With Marilyn” and the Holocaust drama “Woman in Gold.” But right from the start, this period piece passes through several dark passages on its way to the House at Pooh Corner, beginning in 1941 when an ominous telegram is delivered to Milne (Domhnall Gleeson) and wife Daphne (Margot Robbie) as they tend to their quaint Sussex garden. Cut to the First World War being waged in 1916 France, where Milne struggles with shell shock amid the carnage and chaos.

When he returns home, the writer—whose first name is Alan but is mostly referred to as Blue—tries to readjust to his previous posh life as a successful generator of witty plays and humorous magazine essays. But despite his happy-go-lucky socialite wife’s attempts to cheer him up, he continues to suffer from paralyzing flashbacks induced by such triggers as buzzing bees, flickering lights and popped balloons. Robbie’s Daphne decides a baby might lift her hubby’s spirits and make him forget that big, bad war. But their son’s arrival only reveals how ill-prepared the couple is to take on child-rearing responsibilities. Milne eventually decides that a rural retreat will halt his waking nightmares. Soon, a live-in nanny is hired to tend to their son, a warmhearted godsend named Olive (Kelly Macdonald, a nice contrast to a rather stiff Gleeson and chilly Robbie).

But when mummy extends a stay in London so she can party on and Olive is called away to tend to her sick mother, father and son are left to their own devices and eventually forge a close bond. Their outdoor rambles often include Christopher Robin’s stuffed animals, a gift from his mother and practically her only positive influence on the child, and together they bring the soon-to-be-famous characters to life. These sequences as well as those with Macdonald are often truly enchanting thanks to nine-year-old acting newbie Will Tilston, an androgynous chubby-cheeked cutie with Grand Canyon dimples, a remarkable bowl haircut and an innate sense of how to deliver a line.

Suddenly, Milne is writing up a storm about Pooh and his buddies, and his books become a worldwide sensation. That is when the film evolves into a sort of horror movie as his son becomes an unwitting celebrity, forced to do interviews, pose for photo ops and meet and greet fawning Winnie worshipers. Basically, he is unwillingly roped into being not just a muse but a shill for his father’s work.

When puberty hits, Alex Lawther (the young Alan Turing in “The Imitation Game”) takes over as Christopher Robin, whose fame makes him an irresistible target for bullies after he is sent away to a boarding school. When World War II breaks out, he fails to pass the medical test for becoming a soldier but begs his father to pull some strings. And that is where the telegram comes in.

What could have been a salute to the power of imagination to heal damaged souls and broken relationships instead opts to focus on tragic events. Maybe it is for the best that my row mate left before she could witness the ultimately happy yet cruel twist at the end. Like many behind-the-scenes looks at  famous writers of childhood staples, whether C.S. Lewis in “Shadowlands,” Lewis Carroll in “Dream Child,” J.M. Barrie in “Finding Neverland” and P.L. Travers in “Saving Mr. Banks,” “Goodbye Christopher Robin” follows the formula of pulling back the curtain to reveal these often complicated if not entirely pleasant influencers of young minds. Yet this might be the first of these fact-based bookshelf accounts to induce PTSD symptoms in kids. 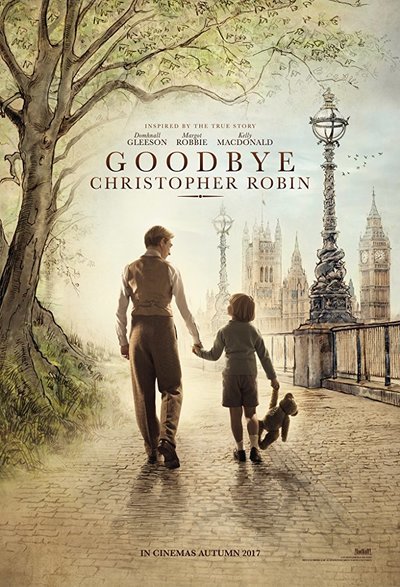 Will Tilston as Christopher Robin Milne