"Saving Mr. Banks" is an intoxicating kiddie cocktail for young-at-heart adults, inspired by a Disney fairy tale based on fact: the making of "Mary Poppins," the 1964 musical fantasy starring Julie Andrews and Dick Van Dyke that would lift the studio's status from pioneering animation factory to producer of celebrated live-action family entertainment.

The cinematic recipe? Combine one part comical clash of the titans with one part riveting backstage account of artistic collaboration. Then add a splash of bitters in the form of a coming-of-age tale laced with broken dreams. Serving it all with panache (along with a few knowing winks for Poppins buffs) is a standout ensemble of seasoned players, under the direction of John Lee Hancock ("The Blind Side").

The movie focuses on two weeks in 1961. That is when the aggressively charming Walt Disney (Tom Hanks, conveying both the Hollywood icon's boyish sense of wonder and iron-fisted resolve) entered the final stages of a 20-year pursuit of P.L. Travers (Emma Thompson, perfectly cast in every way down to her tightly wound perm), the Australian-born British female author behind the flying nanny, to secure the film rights to her book.

Now that sales of her work are slowing, the cash-strapped writer is encouraged by her agent to seriously consider Disney's offer, and the mogul is eager to finally seal the deal as he beckons the London-based writer to his Burbank, Calif., domain. But Travers wants the agreement on her own persnickety terms. The back-and-forth wooing that ensues amid splendidly retro '60s décor and fashions will prove irresistible for anyone who grew up under the influence of Uncle Walt's cultural sway—except, perhaps, those for whom the very idea of Disney present celebrating Disney past sounds like an infomercial from hell.

"Mrs. Travers," as she preferred to be called, is in a tizzy of disdain from the moment the L.A. sunshine hits her perpetually frowning face. Taking in the California air, she tells her chauffeur (Paul Giamatti in non-sadsack mode for once), "It smells like…" He smilingly suggests, "Jasmine?" "No," she continues. "Chlorine. And sweat." Her mood only grows more despondent when she enters her posh suite at the Beverly Hills Hotel and discovers that it has been festooned in the manner of a child's birthday party, complete with cakes and candy, balloons, fruit baskets and countless stuffed animals based on Disney characters. Travers forlornly glances at a cuddly Winnie the Pooh and exclaims, "Poor A.A. Milne." The giant Mickey Mouse that graces her bed is dispatched to a corner with a warning: "Stay there until you learn the art of subtlety."

The plush critters get off easy compared to how Travers treats the talent in charge of translating her beloved authority figure into an adored movie character. Imagine Maggie Smith's imperious Dowager Countess on "Downton Abbey" crossed with Godzilla. Stomping onto the studio lot, Travers insists on changes that range from innocuous (switching the name of the mother of Mary Poppins' wee charges from Cynthia to Winifred) to insulting (she rails against the use of any "silly cartoons," a phrase that visibly pains Disney) to the impossibly outlandish ("No color red in the film—at all!").

Yes, Thompson gets most of the best lines, and rightly so. But "Saving Mr. Banks" has greater ambitions than simply providing a backstage peek at how such catchy songs as "Let's Go Fly a Kite" and "A Spoonful of Sugar" came to be (Jason Schwartzman and B.J. Novak are superb as in-house sibling tunesmiths Richard and Robert Sherman as they endure verbal slings and arrows).

It seems that Hancock and his screenwriters, including rising star scribe Kelly Marcel (next project: the film version of "Fifty Shades of Grey"), have heeded Travers' insistence on gravitas when it comes to portraying childhood. As a result, the flights of showbiz fancy are grounded by golden-hued flashbacks to Australia 1906. That is when a 7-year-old Travers—born Helen Lyndon Goff, and is played by sweet and sorrowful newcomer Annie Rose Buckley—was relocated to a remote outback town with her two younger sisters, overwhelmed mother, and loving though deeply alcoholic banker father (Colin Farrell).

We witness how Ginty, as she is called, got her knack for storytelling but also her morose nature after feckless Pop proves ill-suited for such pursuits as holding down a responsible job. The source of Mary Poppins is revealed in Rachel Griffiths' no-nonsense Aunt Ellie, who swoops in to mend the unsettled household as best she can—that is, until Dad’s condition proves beyond repair.

These blasts from the past, as important as they are, come close to killjoy intrusions at times, especially when we rather revel in scenes such as spoilsport Travers finally succumbing to the magic of the Sherman brothers' music. Besides, two moments provide enough weight on their own without resorting to quite so much melodrama. One is when Hanks digs into a monologue about his own Midwestern farm boy past. The other celebrates the transformative power of movies, as Travers—who drops in uninvited to the L.A. premiere of "Mary Poppins"—is shown in a darkened theater silently reacting, as if her face were an emotional barometer. It is akin to the key scene in the 1941 classic "Sullivan's Travels," when a jailed film director experiences the power of laughter while seated with fellow prisoners—as they watch a Disney cartoon short, no less. 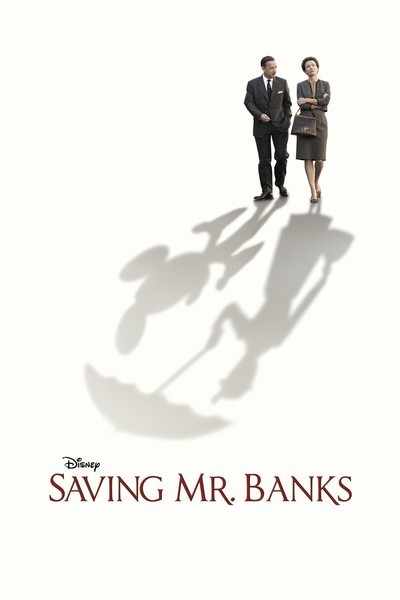 B. J. Novak as Robert Sherman