Before its spectacularly messy finale, the head-scratching mystery thriller “Gone in the Night” barely holds itself together thanks to the star power of co-stars Winona Ryder and Dermot Mulroney. The rest of the drama doesn’t fare as well given how much of its plot, about a missing person who may or may not have been abducted, seems to have been designed to keep viewers at arm’s length and in the dark for as long as possible.

Some of the film's more disorienting qualities—particularly its sudden and haphazard use of flashbacks to first tease and then fill in the gaps of viewers’ knowledge—make more sense once you realize that “Gone in the Night” was directed by Eli Horowitz. Horowitz, who co-wrote “Gone in the Night” with Matthew Derby, also co-created the psychological thriller “Homecoming” podcast, which he adapted into a compelling TV series with Micah Bloomberg and “Mr. Robot” show-runner Sam Esmail. (Derby also has writer credits on the “Sandra” podcast from 2018) For better and worse, “Gone in the Night” feels like the directorial debut of a podcaster, somebody who knows the value of storytelling novelty and has a gift for narrative economy, but also suggests more by the grace of good casting than their own singular talents.

Ryder takes the lead in “Gone in the Night” and makes you want to see whatever befalls her dazed protagonist Kath, who mounts a haphazard search for Max (John Gallagher Jr.), her spacey boyfriend. Max disappears soon after he and Kath go on vacation at a secluded Northern California cabin, where they’re ambushed by a mysterious couple: Al (Owen Teague), who’s sullen and aggro, and Greta (Brianne Tju), who’s horny (for Max) and provocative. Max and Greta pair off after the two couples exchange some unsettling preliminaries and even more awkward ice-breakers, so Kath leaves without her guy. But Max never returns, causing Kath to inexplicably chase after her callow, unfaithful partner. She starts by contacting Barlow (Mulroney), the cabin’s reclusive owner. Barlow quickly joins Kath in tracking down Greta, who in turn leads the pair to the next plot point, and so on.

Max’s disappearance poses a relatively simple question that each successive scene complicates with new information, as when we start seeing flashbacks to a house party that took place just before Kath and Max’s ill-fated cabin visit. Eventually, Kath and Barlow’s relationship becomes the movie’s main focus, and that narrative shift at least clarifies what kind of story Derby and Horowitz have chosen to tell.

Barlow, whose name brings to mind a certain Stephen King character, is a Gen X fantasy: he wears flannel, has a ton of money, and doesn’t like to talk about himself. Max, by contrast, is a walking bad faith argument against Millennials: he’s over-sensitive, has got vague ideas about authenticity and living in the moment, and wears vintage and/or limited edition clothing. Kath is stuck between these two stock characters, and while she’s clearly interested in learning what happened to Max, she’s also drawn to Barlow, who’s rugged, attractive, and unassuming.

Unfortunately, Barlow and Kath’s relationship is almost as sporadic as Max and Greta’s twitchy fling. In the movie’s press notes, Horowitz acknowledges that he was very lucky that Ryder and Mulroney agreed to star in “Gone in the Night,” since these two key roles were apparently written with them in mind. But Kath and Barlow are only so interesting beyond that casting coup.

You can sort of see what’s missing from “Gone in the Dark” when Kath and Barlow go on a stakeout to find and confront Greta. They don sunglasses and pass the time by talking about what really motivates them: they’re both running on fumes and have turned this manhunt into a futile search for their lost sense of youth. That sort of existential mid-life crisis may sound intriguing, but the movie’s plot still hinges on an underwhelming mystery about Max, an obnoxious supporting character.

Kath and Barlow’s stakeout consequently feels like a tidy break during an otherwise brisk, but empty procedural. The same thing could be said about the movie’s flashbacks to Kath and Max’s pre-cabin life. They’re well-mounted and efficient, but they don’t really convey much beyond whatever the characters tell us.

The rest of “Gone in the Night” is staid and unusual enough that it might pique some viewers’ interest. And yet even the most invested fans would probably be better off sitting in their own cars and wondering what they’re living for anyway, man. 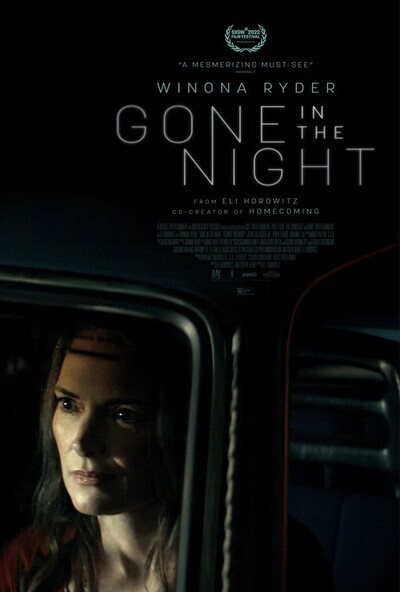 Rated R for language throughout and brief bloody images.