In the charming and wryly bittersweet Israeli film "Golden Voices," Vladimir Friedman and Maria Belkin play Victor and Raya Frenkel, "golden voiced" actors in their 60s who made a living dubbing movies in the Soviet Union. Audiences would see Kirk Douglas, Gregory Peck, or Dustin Hoffman on the screen but the Russian-speaking voice they heard was Victor's. He says, "Each movie is an entire world we help people enter." A fellow emigre tells him that when he saw "Spartacus" in Israel he realized that what he loved about the movie was Victor's voice. "You make Kirk Douglas great!"

The Frenkels, like the actors who play them and co-writer/director Evgeny Ruman, are among the over 900,000 Jews who emigrated to Israel as the Soviet Union crumbled in the 1980s. They get very little by way of support. A nephew once named Boris is now called Baruch. He drops them at an apartment he found for them and leaves them there. Victor suspects that a small utility box on the wall is some sort of spyware, reminding us that he has always had to be conscious of being observed. But the film touches very lightly on the cultural differences. This is not a "Perfect Strangers"-style sitcom filled with laugh-track-able cutesy misunderstandings and malapropisms. Standing in line to pick up gas masks to be used if Saddam Hussein drops a chemical bomb on Israel seems as ordinary a part of their new life as taking Hebrew lessons.

What is more unsettling is not being able to find "golden voices" jobs that meet their standards of professionalism and artistic value. The only Russian-language voice jobs they can find are an unpaid public service announcement about what to do in case of a toxic chemical attack for Victor and being a phone sex operator for lonely Russian newcomers for Raya. She is so embarrassed by it that she tells him she is a telemarketer. And yet, in one of the film's best scenes, when it comes time for her to be not real-life 62-year-old Raya but fantasy-figure 22-year-old virgin Margarita on the phone, Belkin shows us how the actress in Raya rises to the occasion and even enjoys being a performer again. Raya/Margarita seamlessly shifts into a different character for one caller. She can tell he will appreciate an older, dissatisfied wife mode. As she talks to this caller, some of her true self begins to come through, more than she has allowed herself to be for many years.

Victor toasts to "a fresh start" on their first night in Israel. But starts don't happen at all once and do not always feel as fresh as we hope. The Frenkels and their relationship are tested as they have to re-invent themselves. Their golden voices have been deployed on behalf of others for decades and their real selves, in this new environment, are emerging uncomfortably. Raya says she wants to feel like the lead actress in her own life but "I'm not even a supporting character." Victor is increasingly glum and distant. For the first time in a long time, perhaps ever, they will have to find a way to speak with their own voices.

Belkin, who was nominated as Best Actress by the Israeli Film Academy for this role, is a radiant delight, showing us how Raya uses her voice to explore her deeper feelings as her husband must abandon his sense of himself as a professional to do quick dubs of pirated films. This is very evidently a personal story for the people who made it, a heartfelt note of thanks for the fresh start they found in their new home, and for all fresh starts and the people with the courage to find them. 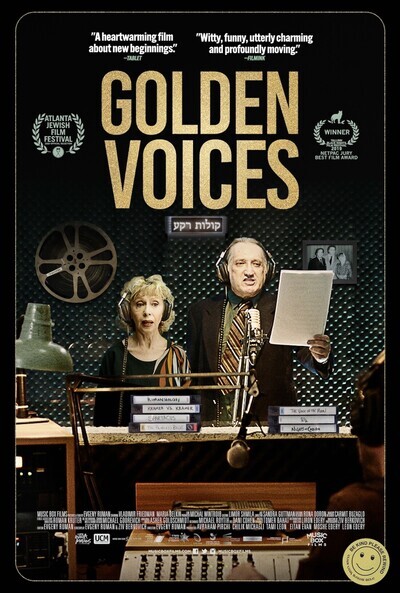