"God's Not Dead 2" is the follow-up to the huge 2014 box-office hit from the same studio that brought out similar Christian-themed movies like "Do You Believe" and "Faith of Our Fathers." These aren't Christian movies like, say, Mel Gibson's "Passion of the Christ," Carl Dreyer's "The Passion of Joan of Arc," or D.W. Griffith's massive epic "Intolerance." Those were films vibrating with faith that also had high and often visionary artistic value. But "Faith of Our Fathers," "Do You Believe," "God's Not Dead," and now "God's Not Dead 2" are cheaply and often shoddily made, and aimed at a specific demographic. The films are the ultimate in preaching to the choir. They're so rooted to this specific time and place in American evangelical Christianity that future generations, even Christian generations, might watch them and ask each other, "Wait ... can someone look up 'Duck Dynasty,' because it seems to have been very important to these people."

"God's Not Dead" told the story of a young Christian college student locked in a battle of wills with an atheist philosophy professor who wants his students to declare "God Is Dead." The movie was crowded with as many subplots as an entire season of a television series, complete with a rousing concert at the end by the Christian pop group Newsboys.

"God's Not Dead 2" (like that old recurring joke from "Saturday Night Live": "Generalissimo Francisco Franco is still dead") gathers together much of the same cast of characters, including the Newsboys (and both were directed by Harold Cronk, and scripted by Cary Solomon and Chuck Konzelman). The sequel moves the action to a high school. Grace Wesley (Melissa Joan Hart)—her first and last name symbolic of her importance to Christianity—teaches AP History, and one day answers a question in class about the connection between the teachings of Gandhi and Martin Luther King, Jr. and the teachings of Jesus. Grace answers, quoting Scripture. The parents of the student who asked the question complain to the school. They define themselves as "rationalists" and "free thinkers" (code words for "atheism" in the world-view of "God's Not Dead 2," and if you didn't get that, then just look at the mother's cold-bitch Alexis Carrington wardrobe as well as the fact that she doesn't grieve her young son's death). Grace is called on the carpet, she refuses to apologize, and the whole thing ends up being battled out in a court of law under the watchful eyes of the nation.

The court case has its moments of interest, and plays out as it would in real-life, with different groups of protesters screaming at each other on the courthouse steps, and the constant chatter of the various zealot-outrage-brigades on television. The only really good scene in the movie features real-life cold case homicide detective, J. Warner Wallace, who used his forensic statement analysis skills on the gospels, resulting in a book called "Cold Case Christianity." He's put on the stand in defense of poor, wronged Grace Wesley, and his testimony is simply delivered and thought-provoking. The gorgeous Jesse Metcalfe, as Grace's lawyer, gives a good performance as well. The character is a public defender assigned to her case. He is not a Christian, but feels strongly that she was not preaching or proselytizing in the classroom, but merely answering a question posed to her. Metcalfe adds at least a layer of nuance to the ham-fisted proceedings. There's one particularly low moment, though, where we are treated to the spectacle of a white man schooling the clueless African-American principal of the school (Robin Givens) about what Martin Luther King really meant in his famous letter from the Birmingham jail.

Like "God's Not Dead," there are a lot of subplots, some that have to do (tangentially) with the court case, and others not at all. A young Chinese student who discovers he is a Christian has a painful fight with his father that is well played (although this is the sort of movie where a son says, "Father, I'm a Christian!" and the father whacks him across the face. Still: it's a nice scene.) A young reporter whose cancer is in remission doesn't know how she feels about Jesus anymore. David A. R. White reprises his role as the friendly pastor Dave (White was also one of the leads in "Faith of Our Fathers"), who experiences life as a series of mishaps—spilled coffee, a stubbed toe, a burst appendix—but eventually realizes that "we" are at "war" here, and it's time to get serious about fighting back for faith.

Director Harold Cronk doesn't find a way to blend these scenes into a whole, although thematically each character struggles with an aspect of faith. Scenes sometimes just sit there, or taper off in an amateurish way, one example being a scene that ends with a character saying, "I'm going to go get a cup of coffee" and then off he goes to get a cup of coffee. Cue curtain. Flow is essential in a film with so many storylines, but when the action moves away from the courthouse in "God's Not Dead 2," you can almost hear the gears creaking as the story shifts its focus.

"God's Not Dead 2" is filled with a sense of paranoiac persecution and seething resentment towards secular public schools, the ACLU, government interference and those who don't care for "Duck Dynasty." The movie is loaded with simplistic "Us vs. Them" thinking, comforting, perhaps, to those in agreement, but extremely disturbing to those not on board. The atheist mother is more upset when she learns that her dead son read the Bible than the fact that he is dead. Ray Wise shows up as the ACLU attorney, a character who makes Robert Shapiro (as gorgeously played by John Travolta in "The People vs. O.J. Simpson") seem subtle. He is the personification of evil, sneering and snickering, preening and murmuring, assuring the atheist parents in an early meeting, "We will prove, without a shadow of a doubt, that God is dead."

Early persecuted Christians would scratch the Ichthys symbol in the sand, the "fish" a secret code amongst themselves in dangerous times: "I'm a believer. Are you?" The "persecution" portrayed in "God's Not Dead 2" is ratcheted up by people's paranoia about the tyranny to come, but now, instead of scratching the fish in the sand, they murmur "Duck Dynasty" to one another. That's how they know they are among friends. It's inadvertently hilarious. There are serious movies about the Christian faith, about the persecution of the faithful, and about the intolerance that goes both ways. "God's Not Dead 2" is not one of them. 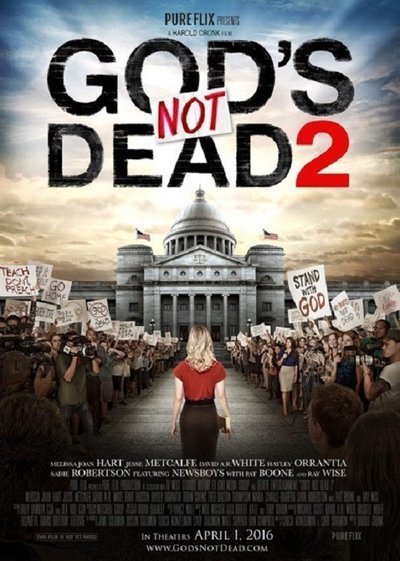