Jillian Bell gets her own "Enchanted" with "Godmothered," a new Disney film that riffs on where fairy godmothers come from, and what help they can be in the real world. She's certainly been put to better use in other movies (like down-to-earth Sundance comedy “Brittany Runs a Marathon”), but Sharon Maguire's “Godmothered” is a great display of Bell's imagination as an actor, and her dedication to a joke.

In this cluttered but charming family comedy, the rising comedic talent plays a fairy godmother from a far away land called The Motherland. With moss covered castles and June Squibb as its spunky, resident DJ, it's a kingdom for fairy godmothers who are meant to help humans find their Happily Ever After as if we were just a portal away from a Disney story. Bell's Eleanor is the youngest one in a dying business that we learn is ready to be converted into a Tooth Fairy enterprise, because people no longer believe in Happily Ever After—a detail that has turned other godmothers into cynics who eye-roll about the promise within a "formula." But Eleanor, with a bright pink gown that makes her stand out from her more experienced but graying peers, has optimism on her side. And just like Amy Adams as a Disney princess roaming in New York in "Enchanted," Eleanor seeks to spread magic as she understands it. And also like "Enchanted," "Godmothered" proves the fairytale formula still works, especially when it comes with a winking sense of humor.

Eleanor's quest to help someone tosses her into the real world, where Bell's comic gifts shine. Her sharp line delivery when interacting with regular humans, like a trucker on the side of the road, is always bookended with a big smile. It totally weirds them out, and it's often very funny. Throughout, Bell helps create some very funny fish-out-of-water jokes, jumping on any chance to show Eleanor's earnest naïveté (a bit about handling money had me laughing out loud). Thanks to Bell's game approach, Eleanor is a punchy mix of an earnestly ebullient musical theater student and someone gravely out of touch with reality.

But all of this proves to be a prologue for Mackenzie's story. As a young girl from Boston, Mackenzie wrote to the fairy godmothers asking for a Happily Ever After, a request that got lost in the mix until Eleanor found it in a towering room of file cabinets. Played by Isla Fisher, she’s grown up now, and pretty straightforward in terms of what needs fixing: Mackenzie gave up hope when her husband died four years ago, and has become distant to her two daughters Mia (Willa Skye) and Jane (Jillian Shea Spaeder), who get more attention from babysitting Aunt Paula (Mary Elizabeth Ellis). It's not going to be an easy job for Eleanor, especially as Mackenzie keeps trying to brush off the godmother's good intentions. But the sense of family bonding makes for the movie's sweetest scenes, with some of Eleanor's wand waving only being partly responsible.

As if the story needed more plot, Mackenzie's musically talented daughter Jane has an upcoming performance she's been timid about, given past experiences of failing and embarrassment. To show what kind of parental mode she’s in, Mackenzie discourages her from taking on the challenge, fearing what might happen. It’s a gently heart-breaking moment that shows how naturally this cynicism has come to the home, a problem that Eleanor needs to address.

There's also the drama back in The Motherland with villainous godmother figurehead Moira (Jane Curtin), who threatens to close down the kingdom for good if Eleanor fails in helping Mackenzie and her family in time. The best thing about this plotline is that it doesn't take up too many minutes, and leads to some funny scenes where June Squibb's narrator and godmother friend Agnes communicates with Bell. But it adds more even more issues for the story to resolve.

The big problem with a character like Eleanor is that she doesn’t have much of a personality aside from her beliefs, and the jokes that can come from it. And so the story relegates her to a side character to build up a rom-com-lite storyline between Mackenzie and a co-worker, Hugh Prince (Santiago Cabrera). The two of them are struggling at their jobs working for a news station that wants to find the bad in any story, one of this movie's more pointed acts in its playful war on cynicism. Hugh has eyes for Mackenzie, but she has her guard up given her private pain, and a sense that her Happily Ever After already happened. Credit to writers Melissa Stack and Kari Granlund, the relationship is not a primary goal for the movie’s sizable heart, but it also seems like wasted healing time for Mackenzie whenever “Godmothered” aggressively nudges that it could be.

As the story juggles so many balloon-heavy plot components for 110 minutes, it becomes clear how magic could be used for how it’s all told. Instead of feeling zippy, the pacing sags because of its blatantly unremarkable visual sense of wonder, with simple conversations between characters minced by overzealous editing. Once you notice how much this story unfolds with characters just standing around and talking, you can’t unsee it.

“Godmothered” is filled with all types of conceits of cuteness—like a household helper raccoon named Gary, or a cheeseball finale with a big crowd—but no conceit is bigger than setting this film during Christmastime. The holiday simply has nada to do with godmothering or any of the fairytale shenanigans here. And yet "Godmothered" wins this argument, because the city of Boston has rarely been given such a warm depiction at this time of year, showing off a snow-covered Boston Common or the city’s narrow streets, covered in Christmas lights. The only specific Christmas in Boston touch that it’s missing is a version of “Sleigh Ride” by the Boston Pops, opting instead to go for the revered version by the Ronettes.

But the cuteness of “Godmothered” is a winning one overall, especially in how it uses a playful sense of humor and good heart to find its own way to Happily Ever After. It’s not going to be filmmaking that makes “Godmothered” a new Disney favorite a la “Enchanted,” but spark. This movie has it, though you’ll wish it had much more. 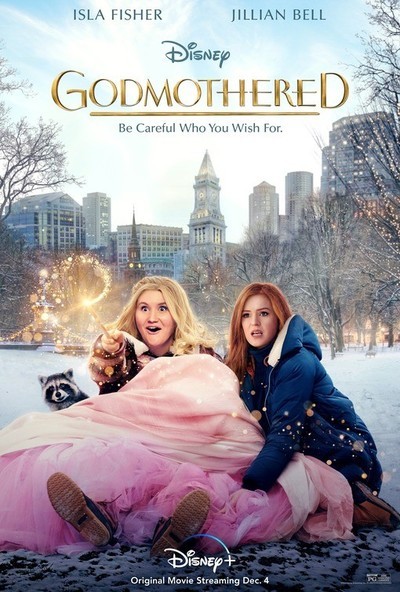 Rated PG for some suggestive comments.