The first time I saw the title and synopsis of “Brittany Runs a Marathon” at Sundance, I cringed. I didn’t want to see some version of my own health struggles at a time when I was not sleeping well, not eating healthy and not getting any exercise aside from standing in line for my next movie. Fortunately, when I finally watched the film months later, I was overwhelmingly charmed. Yes, this movie’s title says it all—there is a character named Brittany (Jillian Bell) who runs a marathon (New York’s, one of the biggest running events in the country). But there’s a surprising amount of nuance in Brittany’s story. The movie unpacks the emotional baggage of how society treats you differently when your dress size is in the double digits, how the scars of bad relationships past (if you’ve had relationships at all) can pool up insecurity and how endless self-loathing can curdle into an attitude that hurts others. Far from being just a simple comedy about fitness and weight loss, Brittany’s journey includes the healing and forgiveness it takes to really meet those goals.

Before Brittany was a runner, she was a party girl who loved to stay up late, drink and eat goodness knows what and dabble in drugs most doctors would frown on. After a reality check from a concerned physician, Brittany decides to reshape her life with something she normally would never do: run. With the help of a neighbor (Michaela Watkins) she used to hate and a fellow out-of-shape-getting-into-shape running buddy (Micah Stock), Brittany learns to take care of herself and the people that matter to her.

Beyond obvious training montages and scenes of those painful first steps into a fitness routine, it’s apparent that Brittany has more to work on than just her high blood pressure. Her struggles are similar to that of many other millennials: she’s a rainy day away from going broke, making do with the low-paying gig economy, her roommate situation is less-than-ideal and romance eludes her on dating apps. Any one of the issues would have been enough dramatic tension for her to deal with, but when coupled with her extreme health makeover and a tragic backstory, it lends this comedy some authenticity. Because she’s coping with so much, Brittany’s self-defenses are always on guard, ready to lash out at those trying to help her. She can even get cruel or selfish, which are not characteristics you usually see in feel-good sports movies. She’s who you want to cheer for, but her tendency for self-sabotage threatens her progress, her friendships and the audience’s connection to her.

Thankfully, Bell and writer and director Paul Downs Colaizzo empathize with their main character’s struggles, giving her room to be messy and imperfect but also a chance for redemption. Downs Colaizzo based Brittney on a close friend of his yet doesn’t spare his cinematic version of her from a few less-than-stellar moments. It’s perhaps the reason why the film feels less like some guy’s fabrication of what it’s like for a woman to go through what Brittany experiences. Bell’s performance balances her character from being too earnest or too hard on herself and really gets at the insecurity she feels about her athletic abilities, her financial situation and her personal life. She can be bubbly or bitter, determined or defeated. Bell shows off a range that many of her previous roles never gave her. In much of the same way seasoned runners make a marathon look easy, Bell makes leading this comedy look effortless.

Since a good portion of the drama plays out on New York City’s never-ending sidewalks and park paths, cinematographer Seamus Tierney’s landscapes look more like a blur, with close-ups of our main characters and bright colors of running gear popping against each frame. The movie still has its independent scrappiness intact, which is most obvious during the digitally rendered marathon map tracking Brittany’s progress through the race. But that does not detract from the powerful emotions captured at the climactic event: the enormous scale of thousands of runners pouring through the city’s five boroughs, hundreds of volunteers scattered throughout the course and miles and miles of strangers—maybe even a few friendly faces—cheering for hours as people cross the finish line. It’s a moment so perfectly encapsulated in the final stretch of “Brittany Runs a Marathon,” that it earns a place among some of the best sports movies. 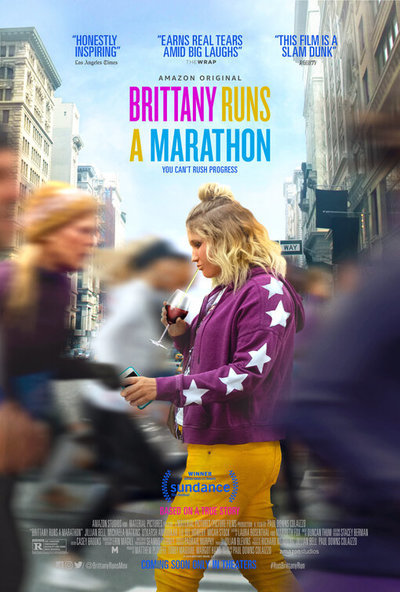