Behold the craven exercise in hollow nostalgia that is “Ghostbusters: Afterlife.”

In taking over the “Ghostbusters” mantle from his father, Ivan, director Jason Reitman trots out all the characters, props, gags and famous lines from the 1984 original as if the mere presence of them were enough for a laugh, or at least a familiar chuckle. His movie wallows in the superficial trappings of the franchise without ever recapturing—or seemingly grasping—what made it such a phenomenon in the first place. It’s essentially a two-hour version of that meme in which Chris Evans, as Captain America in “The Avengers,” says earnestly and with more than a little pride: “I understood that reference.”

This is sort of a sequel and sort of a reboot, but it’s definitely an erasure of the 2016 “Ghostbusters” starring Melissa McCarthy, Kristen Wiig, Kate McKinnon and Leslie Jones, which caused such a stir because it dared to feature women busting ghosts. That’s men’s work! Women are allowed to answer the phone at Ghostbusters headquarters, and they can be possessed by an ancient demon from another dimension as long as they still look sexy, but that’s about it. Come on, guys. When Ray Parker Jr. sang that busting made him feel good, we all knew what he was really talking about. (And yes, that catchy theme song is in here, too, playing over the end credits. It’s truly bizarre in retrospect to realize that it was a massive radio and MTV hit in 1984.)

But first, we must establish why we are taking this slog down memory lane. Reitman, in co-writing the script with Gil Kenan (who directed the 2015 “Poltergeist” re-do), has contrived to send the estranged relatives of one of the original Ghostbusters to middle-of-nowhere Oklahoma. The prodigious talents of Carrie Coon, one of the most insightful and exciting actresses working today, go depressingly to waste as Callie, a single mother of two. Son Trevor (Finn Wolfhard) is a sullen teen with a knack for mechanics. But 12-year-old daughter Phoebe (Mckenna Grace) is a misfit science whiz, a gift she apparently inherited from her grandfather, whose identity is revealed to us in the most eye-rolling way. They all schlep to fictional, small-town Summerville to take over Grandpa’s dilapidated farm, but when they get there, they soon realize there’s something strange in the neighborhood.

Despite his last name and his filmmaking lineage, the director Reitman rips off most here is Steven Spielberg. He tries to establish a feeling of mystery about this place right off the top through low-angle camerawork and misty moonlit nights, with Rob Simonsen’s score working hard to create a sense of wonder. This “Ghostbusters” takes the series’ mythology way too seriously, approaching what should be a light, silly comedy as if it were serious science fiction. The result is an awkward and unwarranted feeling of reverence.

Decades later, we’re supposed to believe, people still talk about what happened that summer in Manhattan. The one friend Phoebe makes is a supernatural-obsessed kid named Podcast (Logan Kim). “I call myself Podcast. Because of my podcast,” he explains. These are the jokes. Podcast enlightens Phoebe about the original Ghostbusters—as in, they literally sit in front of a laptop watching clips from the 1984 movie “Ghostbusters” on YouTube. A hidden lair beneath the farmhouse reveals all the archaic technology, and in the barn beneath a tarp rests the rusty, dusty car from the original film. In case we couldn’t tell what we’re looking at, Reitman repeatedly lingers on the converted Cadillac’s ECTO-1 license plate and the famous, red-and-white logo on the doors. At one point, a character has to make a phone call, prompting another character to ask: “Who you gonna call?” prompting me to groan “Oh my God” out loud to no one in particular in a nearly empty movie theater.

It's like that, over and over and over again. There’s a thing you know, and there’s another thing you know. And look! For the serious fans, there’s a super-nerdy, arcane thing that only a few people know. The Stay-Puft marshmallow man is back, but this time in the form of a bunch of adorably evil, normal-sized marshmallows who wreak havoc at Walmart. (And the interior logic in this bit is confusing. They want to attack Paul Rudd’s middle-school teacher character, but they also try to make s’mores out of each other. So they’re cannibals …?)

“Ghostbusters: Afterlife” is actually more interesting when it’s not a “Ghostbusters” movie—when it’s about a family struggling to fit in among entrenched locals in an insular place. When Rudd and Coon are together, they have a playful, deadpan banter that’s intriguing. When Trevor tries to make friends, he strikes up a flirtation with a pretty, young waitress, but the charismatic actress who plays her, Celeste O’Connor, gets woefully little to do. Grace brings intelligence to her role, but a running bit in which she tries to connect with people by telling bad jokes always falls flat, and watching her here is especially frustrating given the range she’s shown in projects as disparate as “I, Tonya” and “The Handmaid’s Tale.”

Ultimately, though, “Ghostbusters: Afterlife” isn’t about any of these people. It’s about the ghosts of the pasts: the original performers, who show up and sleepwalk their way through their cameos. The film’s depiction of the late Harold Ramis is especially cringeworthy. But at least those guys all realized what this is supposed to be: a goofy good time, and nothing more. 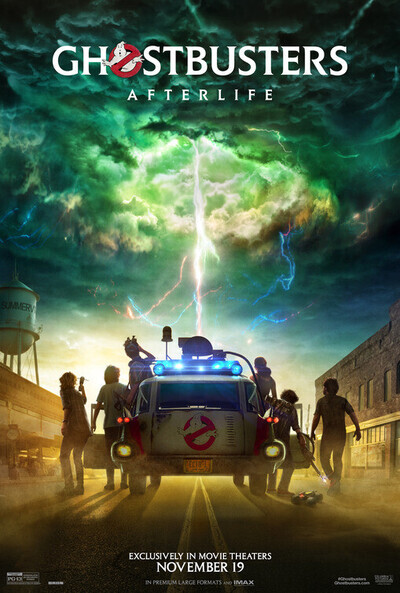 Rated PG-13 for supernatural action and some suggestive references.