"Galveston" is the film equivalent of a familiar, not too special song that's been brilliantly re-arranged and performed.

It's about a middle aged, possibly terminally ill enforcer for a New Orleans gangster who foils his boss' attempt to have him killed, then goes on the road with a 19-year-old call girl who was being held hostage by his would-be assassins. The story doesn't always move as you expect: for instance, there's not even a possibility of a sexual relationship between the two leads, because he's just not interested in her that way. But the bulk of the tale, which was drawn from a novel by "True Detective" creator-writer Nic Pizzolatto, is so familiar that it sometimes suggests a Mad Libs approach to pulp crime writing: fill in the blanks with one of a set number of character types, then embellish them through performance and direction so that everyone seems plausibly human.

That the story is the film's least interesting feature wouldn't matter if the storytellers had pretty much dispensed with it and gone for a pure mood piece, marinated in atmosphere and style; as is, there's just enough attention paid to particulars that you can't help noticing they're a bit half-assed. Still, despite its limitations, this is a consistently engrossing, sometimes powerful crime drama that feels rich despite its brief running time.

Ben Foster, who plays the enforcer Roy Cady, has become one of those reliably great yet somehow always unrewarded character actor-stars, in the vein of Van Heflin or Glenn Ford. He's in rare form here as an inarticulate thug whose buried decency is finally activated by his fear of death, as well as by his sudden feelings of responsibility for another person. Elle Fanning plays the call girl Rocky, who convinces Roy to take a detour to her old home and tells him to wait in the car. She emerges after a gunshot sound and takes her baby sister Tiffany (played by twins Tinsley and Anniston Price) with them on the road to Galveston, where things settle in at a motel near the beach.

The best section is the middle, where Roy, Rocky and Tiffany form a situational nuclear family (another familiar trope in stories like this, but done with sensitivity and intelligence). Roy insists on having a separate motel room from Rocky and Tiffany, but all share Roy's bed one night because Rocky had a nightmare. Foster's expression when Roy wakes up with a child's small hand covering one of his eyes is a crystallizing moment, an epiphany that the character doesn't recognize as such. When Roy and Rocky inevitably share stories of trauma with each other, and us, the actors go for it with a gusto rarely seen in hardboiled crime pictures, which tend to be cooler in tone and rely on repression and inference. Some of the scenes of emotional disclosure are so raw that they're hard to watch, with the actors nearly choking on their own tears.

Beau Bridges, who plays the crime boss, only has a few short scenes, and the character is a small-timer with delusions of grandeur; but he's still scary and repugnant, and his final line is chilling. Robert Aramayo of "Nocturnal Animals" briefly steals the movie as an oily yet charismatic young crook who tries to draw the hero into an ill-advised scheme to knock off a nearby drug lab (any character who brags that he's "a thief, and a real good one" is probably a fool). C.K. McFarland's turn as the manager of the Galveston motel is a great example of how to make a minor character feel like a fully rounded person who has a complex value system and has lived a full life.

The novel was told in first-person from Roy's perspective, in a flowery style that (in this reader's mind, anyway) didn't quite suit its violent and emotionally brutalized hero. Screenwriter James Hammett has reconfigured it as a more distanced and observant piece with no voice-over but lots of scenes where we get to hang back and watch people talk and behave.

Cinematographer Arnaud Poiter's wide compositions are elegantly lit and framed but rarely feel fussy or slick. They go a long way towards bringing a sense of physical realism to a story whose basics would have fit right into an R-rated comic book film like "Sucker Punch" or "Sin City." With its dialogue-free lyrical interludes and frequent lens flares and nature panoramas, the film occasionally suggests a chaste and bummed-out cousin of "Badlands" or "True Romance."

Director Melanie Laurent, a gifted French actress and filmmaker making her English-language directorial debut, treats the story mainly as an excuse to let the actors build out detailed performances, within carefully framed shots that give them room to move and breathe and make viewers decide where to look. One sign of confident direction is when a film doesn't feel obligated to cut to a closeup of an actor every time they say a line, and instead allows the camera to stay on them as they're listening or thinking. "Galveston" does that a lot.

It also puts you in Roy's shoes during violent moments, letting brutality occur off-camera or out-of-focus, or in shots that deliver information but don't linger. Paradoxically, this approach to violence is more disturbing than a wild and expressionistic or coldly clinical approach, perhaps because the film itself seems to be flinching. The aftermath of a climactic act of savagery is depicted with as much restraint as possible, short of not showing it at all, yet it's still one of the most sickening things I've seen in the decades I've been writing about movies. It casts a long shadow over the film's final sequence, which seems meant to be redemptive yet melancholy, but mostly comes across as very French.

"Galveston" is worth seeing if you're into nasty yet sorrowful crime films about small-time losers, if you want to see Elle Fanning in another breakout adult role, if you're a Ben Foster completist (as everyone should be by now), and if you want an especially vivid illustration of Roger Ebert's maxim that it's not what a film is about, but how it's about it. 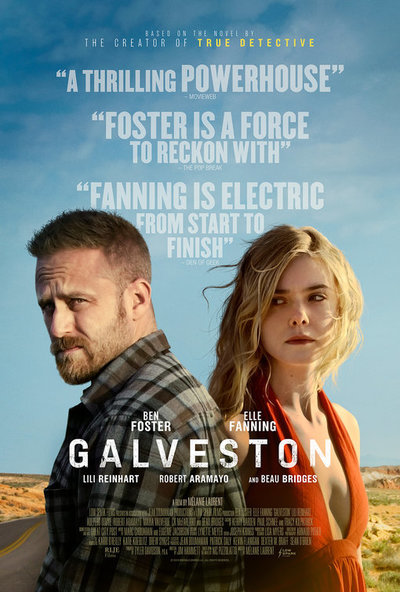