Gabby Giffords Won't Back Down

There are scenes in “Gabby Giffords Won’t Back Down” of former Member of Congress Gabby Giffords, in the first weeks after she was shot in the head by a would-be assassin, that are terribly painful to watch. Her doctor explains that the bullet went through the part of the brain that controls expressive language. At first, they didn’t know if she would ever speak again. But as seen in the archival footage from the film’s opening scenes, Giffords is a person of extraordinary intelligence, determination, and perhaps the rarest, most important factor—unquenchable optimism.

More on that later. But first, about those terrible months of rehab, when she first begins to speak and she cannot stop saying “chicken” (the brain has its own logic) and then has a moment of despair and sobs (the impaired brains loses filters). We cannot help but wonder if it is intrusive, even exploitive, to include these very private moments of such severely diminished capacity.

And then, near the end of the film, we see Giffords watch those same scenes in her home, with her husband, astronaut-turned Senator Mark Kelly. And she laughs. That is why we had to see the footage. All of the remarkable progress we have seen cannot convey her unquenchable spirit as powerfully as her laughter at how far she has come.

I would say that the timing of this film’s release is particularly impactful following a week in which a 4th of July parade in a tranquil suburban community was interrupted by a mass shooting that murdered seven people and injured 46 more. But it was not even the only mass shooting that day. In fact, the US has had more than one mass shooting every day so far in 2022 and no week without at least four.

Last week was also when ground-breaking legislation was enacted to address some of the factors that are connected to mass shootings. Some of the credit goes to Gifford and Kelly who have devoted their lives since the shooting to gun safety reform through their advocacy group, now just called Giffords.

The former Congresswoman always notes that she is not anti-gun. As a candidate in right-leaning Arizona (and as a former registered Republican), she often reassured voters that she was a gun owner and gun user. “I’m not against guns,” she says. “I’m against gun violence.”

Giffords the person and Giffords the organization both recognize the many factors involved and have a wide-ranging set of initiatives addressing suicide, mass shootings, police, shootings, the gun lobby, and more. She is ever-mindful of her own injuries and of the people who died just because they came to talk to her, including a judge, a little girl, and a member of her staff. The film also gently points out that she was shot just a couple of days before she was to start IVF. The gunman took lives and caused injuries to prevent further life.

The movie shows us Giffords’ life before she was shot, including a twist out of a Hallmark movie when she had to give up her big job in the big city to come home and run the family tire business. It is endearing to see one of her old television commercials. And it is bittersweet to see how much positive energy and passionate engagement with the world she had before, and to hear President Obama and others talk about what she might have been if she had been able to stay in office. But the optimism that buoyed her as she made the best of being a tire store CEO, and saw a path through politics to find solutions, is also the source of her reset after her injury. As she says, “I tell myself, ‘Move ahead.’ I don’t look back.”

Giffords admits that she still struggles with speech, but adds, “I have not lost my voice.” Like many people with brain injuries, her language is more fluent when she sings, and that is when we really get to hear how authentic her indomitable spirit really is. In one sweet moment we see her coaching her husband on his first remarks to the Senate. He may have the full power of speech, but she understands how to communicate. This documentary is about resilience and advocacy, but most of all it is a love story. 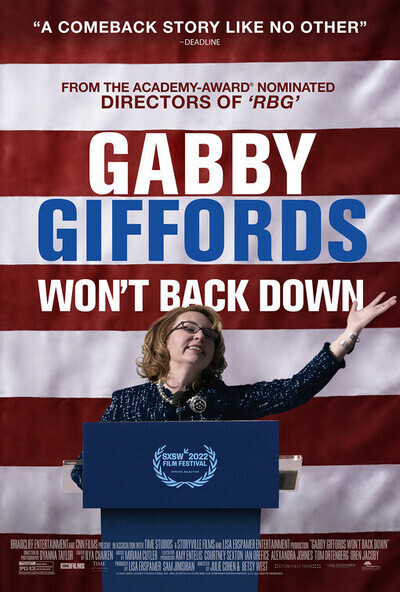 Gabby Giffords as Self

Mark Kelly as Self

Barack Obama as Self