“He was unflappable but he was also entirely delusional.” This statement during the jaw-dropping “Fyre,” a new Netflix documentary about the disastrous 2017 Fyre Festival (and an interesting partner with the also-new Hulu documentary “Fyre Fraud”) really gets at the core of who Billy McFarland was during this entire crash-and-burn nightmare. There’s something to be said for people who forge on, pushing past adversity and jumping the hurdles placed in front of them by life. However, realism is also a virtue, and McFarland kept forging until he left literally hundreds of people in his wake, conning investors, getting free labor, and ultimately going to jail for his crimes. He is a modern Jordan Belfort, the criminal played by Leonardo DiCaprio in “The Wolf of Wall Street”—the kind of person whose story is too fascinating to ignore but also heartbreaking when you consider all the great pain he’s caused. Chris Smith’s “Fyre” deftly understands this, never turning into the millennial schadenfreude it easily could have become.

First, a brief history. Billy McFarland was always a con man—it really just took the Fyre Festival to expose it. Before then, he developed a credit card company called Magnises, which promised discounts and exclusive access that it rarely provided. He was working on a project that actually might have worked called Fyre, which would alleviate some of the issues with booking high-end talent. Want Ja Rule to play your event? You don’t have to dig for contacts, you just go to Fyre and get a quote. While developing Fyre, McFarland got it in his head that he wanted to throw a massive party on an island in the Bahamas that was once owned by Pablo Escobar. Before even a minute of planning the actual event was undertaken, McFarland and his mates went down to the Caribbean and shot a promo video, complete with supermodels like Emily Ratajkowski and Bella Hadid cavorting in the sand in their bikinis. Come to Fyre Festival and party with supermodels on yachts while you listen to major DJs and other artists! The buzz became deafening when McFarland and his team convinced major influencers to tweet just an orange block, promising them villas at the actual event…which no one really had done any planning for at all. It's tempting to say that things went "predictably wrong" but they went wrong in unpredictable ways too.

“Fyre” is a document of a disaster, speaking to a number of the key players behind the scenes, although never McFarland himself (he is a part of “Fyre Fraud,” and this great piece by Scott Tobias details the controversy there). Instead we get a view of the naked emperor from his many, many servants and it’s incredibly damning to say the least. As people around him scrambled to put together a music festival that could never really happen in a matter of months, McFarland’s blind refusal to admit that it was going to be a disaster just amplified the inevitable pain. Nearly every interview in “Fyre” produces another WTF revelation from the gentleman who was asked to perform a sexual favor to get the water bottles needed to keep people hydrated through customs to the Fyre employees ordered to put money on wristbands that would ostensibly be used at the festival but were clearly offsetting rising costs. Billy McFarland bilked everyone he laid eyes on, even the people who were most loyal to him.

Having said that, what’s notable about “Fyre,” and perhaps makes it an interesting counterpoint to “Fyre Fraud,” which I have not yet seen, is that it’s not Billy’s face that I remember. It’s that of a woman who runs a restaurant near where this entire clusterf**k went down in the Bahamas. As the chaos mounted, and people started to show up, she worked and worked, bringing employees in and forcing them to take all-night shifts in an effort to do something to keep people happy. And Billy left her high and dry, not paying her or her employees. I think about her tearful face and I’m fascinated by the ripple effect of models cavorting on a beach to this hard-working woman being taken advantage of. One doesn’t happen without the other. “Fyre” is a story of shallow excess—how we’re in an era in which how something looks is more important than what it actually is—but it’s also a reminder that everything still has a cost. 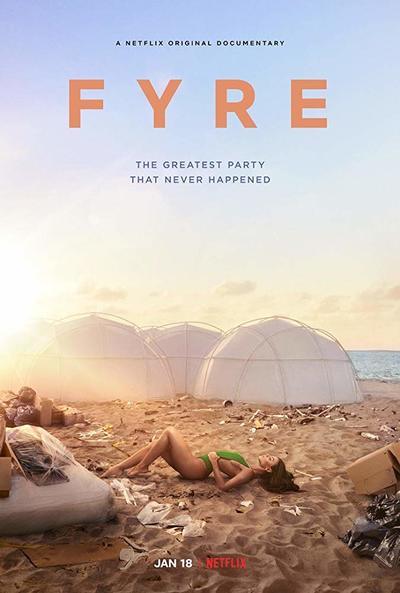