"Frozen II" has an autumnal palette, with russet and gold setting the stage for an unexpectedly elegiac tone in the follow-up to one of Disney's most beloved animated features. Even the irrepressibly cheerful snowman Olaf (Josh Gad), now permafrosted so even the warmest hugs don't melt him, is worried about change as the leaves turn orange and float down from tree branches. He is confident, though, that as soon as he gets older he will understand everything. After all, that's what he expects from Elsa (Idina Menzel), Anna (Kristen Bell), and Kristoff (Jonathan Groff). Anna reassures him (in song, of course) that yes, some things change, but some things are forever. She tells him that even when you don't know the answers you can always just do the next right thing, and that will help.

"Frozen II" is funny, exciting, sad, romantic, and silly. It has great songs and a hilarious recap of the first movie, and then it is all of that all over again. Plus an extra scene ALL the way at the end of the credits. This sequel can seem overstuffed at times, and tries a bit too hard to replicate the magic of the first film, but it is impressively willing to engage with some complicated issues in a frank manner that is accessible to children and insightful even for adults.

It throws a lot at us, like rock monsters, a cute fire salamander, and a magnificent water horse (the latter two likely to appear on holiday gift wish lists). The settings are gorgeously imagined and wonderfully inviting. Anna has a sensational new wardrobe. We learn family secrets, some comforting, some painful. Characters confront some of the most daunting human questions about loss, change, trust and how we can best heal the wounds of the past.

In a charming flashback, we see the princesses as little girls, playing together happily and being put to bed by loving parents. The king tells them a bedtime story from his own childhood about visiting an enchanted forest with his father to celebrate the completion of a dam the Arendellians built to help the indigenous people. But the gathering turned into an attack. The king was killed, and only the young prince survived, rescued by a mysterious character. Ever since, the enchanted forest has been barricaded by a powerful mist. The girls learn from their mother's lullaby that the river may hold some answers about what happened. "Dive down deep into her sound, but not too deep or you'll be drowned," the Queen sings. "When all is lost, then all is found." It's surprising how dark lullabies can get, a character points out.

In the present day, the sisters live happily in the castle, enjoying family time (Olaf is the Charades MVP) and caring for their community. But Elsa hears voices calling to her from the enchanted forest. She is afraid, but also thrilled. It is an invitation she struggles to admit that she wants to accept, leading to this film's belter ballad, "Into the Unknown." "I've had my adventure/I don't need something new ... don't you know there's part of me that loves to go into the unkn-ow-ow-own."

And so, after a warning from Kristoff's "love expert" friend Pabbie (Ciarán Hinds) and Olaf's not-always-helpful fun facts commentary along the way, they reach the enchanted forest. There, they meet new characters, sing some more songs, sort out some misunderstandings and try to protect each other. They confront the consequences of bad, even tragic choices made by their family.

Parents often ask me why children, especially preschoolers and middle-schoolers, like to watch the same movies over and over. I tell them that when everything around you seems to be drastically changing on a daily basis and you barely know yourself anymore, it can be a great comfort to have a movie friend that's the same every time. "Frozen II" is destined to be one of those movies children will want to see dozens of times. It will reward repeat viewings with both its reassuring messages about responding to change with courage and curiosity, and its challenge to understand the mistakes of the past so we can begin to work on "the next right thing" together. 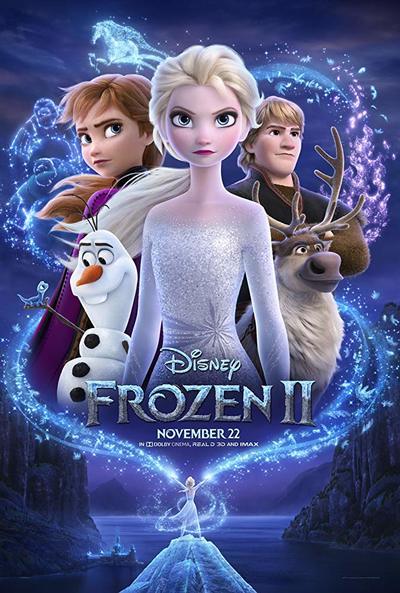 Rated PG for action/peril and some thematic elements.