When we talk about superhero movie overload, it shouldn’t be a question of whether there’s simply too many movies about super-powered individuals. Instead, it’s more about whether a specific movie is adding something worthwhile—and special—to an abundance of tales about people who thrill us by enacting the physically impossible, like controlling minds, turning themselves invisible, or blasting into the sky. “Freaks,” written and directed by Adam B. Stein and Zach Lipovsky, is a half-nifty, half-cheesy addition to that roster, and I can imagine it being fairly divisive between sci-fi and superhero fans.

“Freaks” starts small, by focusing on the relationship between a father (Emile Hirsch, his character known as Dad) and his daughter, Chloe (Lexy Kolker). In the first scene, he’s preparing her for a type of survival, telling her how to lie to adults, and getting her to memorize a speech in case she’s ever caught. They live in a house that’s been boarded up, as if the apocalypse has already happened, or could any minute. But while Chloe lives in isolation, she's enchanted by the images of suburban sunlight that she sees through the cracks, and by the ice cream truck outside run by a man named Mr. Snowcone (Bruce Dern). Through the film's first act, we find out that the world has not ended, but that her father knows something about Chloe she doesn’t understand—Chloe has super powers, and they can reach well beyond the house she’s contained in.

On a larger scale, “Freaks” takes place in a world not too removed from the X-Men, where the super-powered (known even in government-speak as “freaks”) are in danger, especially after a tragedy related to super powers wiped out a city. The freaks are being pursued by Agent Ray (Grace Park), and there’s talk of how people considered “abnormal” were brought to an ominous mountain. As Chloe watches on TV during one of the film’s moments of dumping context, she hears talk about illegal people “running loose,” and it feels too much like shoehorned context about our current immigration crisis.

The story is all told from Chloe’s perspective, who is performed with great confidence by Lexy Kolker. She’s in practically every scene, the mysteries of the film placed on her shoulders as Chloe tries to decipher what the adults are ultimately intending to do with her; she has strong scenes with her anxious father, and also with Dern’s Mr. Snowcone, who swoops into Chloe’s life in an unexpected way by luring her outside. He proves to be a very Bruce Dern-type of grouchy pseudo-father figure, and he knows Chloe’s true potential, and how Chloe can help him break into that mountain.

But working through the movie from Chloe's eyes can be confusing, especially as it wants to be so intricate. "Freaks" jostles you around too much with sequences that may or may not be real—like when she talks to a girl her age named Harper (Ava Telek), who accuses reclusive Chloe of breaking into her sleepover—and the film doesn’t come off as intricate, so much as unfocused. The same goes for a scene where Chloe might be talking to her mother, who suddenly appears in a closet, or it might just be a ghost of her. It all makes sense later, but it’s not a mystery you hold onto for fun, so much as get dragged along by. The slippery aspects of the script clash with the sentimentality of the movie, and it’s messier than it needs to be to make an impact.

“Freaks” is ultimately the the story of Chloe learning the truth about her surroundings, and her powers, with the help of her father and Mr. Snowcone. The third act of this film provides a different way around this climax—instead of having characters “break in” and get out—and displays some impressive slow-motion as one character (Chloe isn’t the only “freak” in this story) manipulates time. It’s clever, too, how certain powers overlap within later action scenes, all within the indie's production value.

But when Lipovsky & Stein finally have all of their emotions and super powers on the table, it doesn’t add up to much, and the results are far too predictable. Yes, it’s an R-rated movie with some abrupt blood splatter—caused by the super-powers—but it has the simplicity of a more cynical version of what’s deemed a kid’s story, a choice that feels like a cop-out even though it’s all from Chloe’s POV. The powers that make “Freaks” super in turn feel more like plot devices, inspired more by cultural appetite than an inspired take on what it means to defy physics, and to use it in a life-or-death situation. That’s the greatest weakness of “Freaks”—it’s just not special enough. 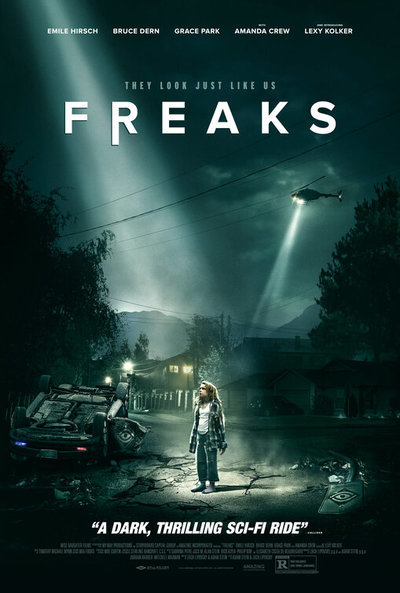