There's simultaneously too much and not enough Wes Anderson in the Indian-American comedy "Four Samosas," a warm-but-flat heist pic set in the L.A. neighborhood of Artesia (AKA "Little India.”) The makers of "Four Samosas" declare their Anderson love during the movie's frantic opening scene, where a quartet of obviously disguised thieves burst out of Juneja's Cash & Carry. Oversized yellow intertitles precede some Andersonian slow-motion as the four thieves bolt across the symmetrically framed screen. Aspiring rapper Vinesh (aka "Big Vinny") (Venk Potula) uses voiceover narration to frame the ensuing plot, which starts "a few days ago."

"Maybe it's a story about finding your voice again," Vinny speculates. "Or maybe it's just a story about saris," he concludes. More saris might've helped, but the real problem with "Four Samosas" isn't its Anderson-y affect or its general lack of cultural specificity. Rather, there are more great setups than good punchlines in writer/director/co-producer Ravi Kapoor's fleet-but-unmoving tribute to Artesia and its South-Asian residents.

Vinny's story concerns a group of wayward youths who, in their generic search for community and acceptance, wind up finding each other. Vinny starts on this well-trod path soon after he decides to rob Ajay Juneja (character actor Tony Mirrcandani), owner of the Cash & Carry and father of Vinny's ex-girlfriend Rina (Summer Bishil). Despite their broken up three years ago, Vinny never got over Rina, but she has. Now Vinny schemes to rob Mr. Juneja as stingy Mr. Juneja prepares to give his daughter away to petty rival Sanjay (Karan Soni).

Vinny's stated reasons are selfless: Why is Rina's dad rich while his mom (Meera Simhan) works on a sewing machine in their garage and his aunty in India struggles with her medical bills? Vinny's real motives are obvious—why Sanjay and not Vinny?—especially since he doesn't even know which aunt has "bad valves," according to his mom. ("Is that the Bangalor aunty?")

Still, Vinny assembles a crew of misfits to help him crack Mr. Juneja's safe and liberate whatever ill-gotten treasure they find inside. Each member of Vinny's team has a set of character-defining tics that are never really developed into distinct personalities. There's Anjali (Sharmita Bhattacharya), a bubbly self-published journalist and pushy "under overachiever," according to an introductory on-screen credit. Anjali tags along with Vinny because she likes his best friend Zak (Nirvan Patnaik), a Bollywood-loving chaat salesman who dreams of starring in the sort of dual role musical numbers that Amitabh Bachchan has somehow made glamorous throughout his career. Vinny's group is rounded out by Paru (Sonal Shah), a "malcontent engineer" who loves snacks, but isn't otherwise very good at her designated safe-cracker role.

Paru is a representatively underwhelming character since Shah doesn't get to show off or contribute much to her cardboard-thin character. Paru's personality boils down to her defining quirks: she likes to eat and gets cranky if she's hungry. Never mind that most of Shah's dialogue and jokes draw their humor from the circumstances of Vinny's mildly whimsical heist. Even a ladoo-eating contest, which Paru enters to win some essential power tools, lacks comic timing or visual flair. Paru's well-telegraphed snacking skills are only half the joke; the other half seems to have gotten lost in translation.

There are some Anderson-y excuses for why Kapoor's uniformly underwhelming side characters tend to be both twee and useless. Most of these reasons are negligible, but Kapoor does explain why, for example, Vinny's dad (Kapoor), an aloof priest, doesn't get involved in his son's life (basically: he's a pseudo-spiritual space cadet). Even Paru's behavior makes a little more sense once you see what she does during the big heist. It doesn't make her scenes much funnier though, nor does a general knowledge of Big B's movies improve Zak's Bollywood-style dance number, which serves as a distraction during the heist. Zak's backup dancers are amusing for a couple of seconds and so is Patnaik's exuberance. But Kapoor doesn't capture the delirious joy during an excerpted scene from "Sunny and Salim," Zak's favorite Bollywood musical. These jokes don't write themselves.

Some jokes are endearingly silly enough to land despite their feather weight, like when Mr. Juneja tells Anjali, during a hectic ransom drop-off, that he knows she's wearing a bad disguise, and she responds that she'd prefer to stay in character. ("I'm very committed.”) Most jokes fall short, mostly because there's not much going on under the busy surface of Kapoor's comedy.

Before its typically inoffensive and unmemorable finale, "Four Samosas" inevitably skids into a self-conscious Anderson parody that even the uninitiated will see coming from miles off. As Vinny's crew struts together in slow-motion, a jogger walks by at a normal clip, ruining the illusion of movie-perfect seamlessness. There's no distinguishing flavor to this gag, which makes it hard to care beyond a point. 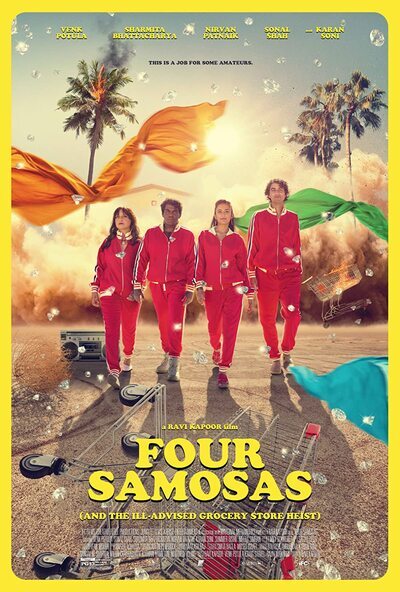 Rated PG-13 for some language and a rude gesture.