You know what I always enjoy in a movie? When it opens with the blood-curdling screams of a woman, and then we see that a bloodied-up dead child is the cause for those screams. Yup. Just hooks me right in.

Unusually enough, though, “Forsaken” actually bounces back from its labored, stressful first moments (although if I’m going to pick nits I can’t say that it ever quite justifies them, even though the event depicted is a crucial part of one character’s back story). It takes a little while. This movie, directed by Jon Cassar from a script by Brad Mirman, is a Western, and while it won’t quite do to call it an “old-fashioned” Western, one of its pleasures is its straightforwardness. It has a solid story to tell, and tells it with no winks and few, if any, frills. It’s involving and ultimately exciting.

The big news about the movie is that it represents, believe it or not, the first substantial pairing of father-and-son actors Donald Sutherland and Kiefer Sutherland. The two did appear in a movie before, the largely forgotten 1983 Neil-Simon-penned comedy “Max Dugan Returns.” That was when Kiefer was in his teens. He has since grown up into, among other things, a superb, perhaps even great, actor. Albeit one who has not appeared in a whole lot of great movies. Here he plays John Henry Clayton, a Civil War veteran long away from home. When he makes his way back to his quiet farm town, his father, the Reverend Clayton—played by the elder Sutherland, otherwise what would be the point, right?—communicates several modes of disapproval. In his time away John Henry has made quite a reputation for himself as a gunslinger. Also, his mother has passed away, an event that makes the Reverend Clayton’s disapprobation that much more bitter. “You would have come home if she was dying but you wouldn’t come home when she was living and full of hope," Sutherland’s character says.

“Wait a minute,” you might be thinking right now. “I thought you said this movie actually got better.” Yes, the-above quoted bit of dialogue is pretty damn on-the-nose, and hard, but if anyone can sell such stuff, it’s Donald Sutherland. He does, and the dialogue does improve. Followers of celebrity, who are familiar with some of the troubles Sutherland fils has had to contend with over the course of his life, will find an extra dimension of fascination in the tense father-son dynamic here, but it works just as well even if you haven’t read an issue of People Magazine in the last thirty years or so.

The father-son conflict might make a good picture on its own, but this IS a Western, and the conflict arises relatively early. Seems that John Henry has decided to study war, and gunslingng, no more. He comes home without a sidearm, starts clearing a field, and generally minds his own business. Fate has other plans. A land-grabber, McCurdy (Brian Cox) has hired a very loquacious gunslinger, one Dave Turner (Michael Wincott) to persuade town folk to give up their acreage in the anticipation of a, you guessed it, railroad station. Dave is a gentleman of sorts, but the confederates with whom McCurdy has saddled him with, particularly Frank Tillman (Aaron Poole) are no such beasts. These fellows have heard of Clayton, and worry that he might be trouble. When he assures them that he has no intention of doing so, they try to goad him. Complicating matters is a former love of John Henry’s, Mary-Alice (Demi Moore) and her easily-brought-to-jealousy husband Tom (Wesley Morgan).

And yes, you read that right. Demi Moore is in it, and she’s quite good. While once notorious as a disrespecter of period integrity (remember her “Scarlet Letter”?) she fits in nicely and gives a modest, convincing performance. Another standout is Michael Wincott, who makes a real character out of his character. All the cast members play off each other beautifully as the tension mounts. McCurdy grows slimier in his machinations, Tillman more out-of-control with his violence, Turner more fed up with having to work with amateurs. And John Henry keeps taking taunts and physical punishment. (He gets smacked around as much as Mel Gibson used to in an average “Lethal Weapon” movie.) You know there’s going to be a breaking point, and when it comes the action that results is very satisfying. Director Cassar worked with Sutherland on the TV series “24,” so he knows about building tension, and he also knows when to get out—he brings the movie in at a brisk 90 minutes or so. 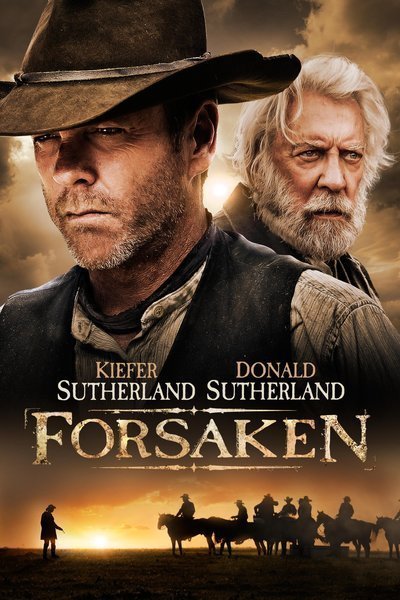 Landon Liboiron as Will Pickard