For They Know Not What They Do

It’s easy to forget how comforting a religious community can be for those unwilling to question its principles. I’ll never forget the youth retreat I attended back when I was a newly baptized Catholic teen. A young man volunteered to share with us how devastated he felt after having committed the sin of premarital sex, as we sat listening to him in hushed silence. We wept with him, prayed with him and left the dimly lit confessional room feeling as though we had seen the light. It wasn’t until many years later that I began to untangle the layers of shame regarding my sexuality that had stunted my growth even long after I had left the church, a decision tantamount to Truman Burbank stepping into the unknown void.

Daniel Karslake’s documentary “For They Know Not What They Do” takes its title from Jesus’ response to those who crucified him, and it serves as gut-wrenching punctuation to the stories of misguided parents whose inability to accept their gay children leads to inevitable tragedy. There isn’t a whole lot in this film that we haven’t already seen before in numerous other pictures, including Karslake’s own debut feature, 2007’s “For the Bible Tells Me So,” yet that’s precisely its point. How much more enlightened has the world actually become in the thirteen years since this film’s predecessor was released? The same Bible passages that many have claimed denounce homosexuality—an assertion flatly debunked in the 2007 documentary—are just as misinterpreted today by evangelicals, only this time, they have an ally in the White House.

President Trump’s attempts to strip transgender citizens of their civil rights protections are as abhorrent an affront to democracy and basic human decency as his empowering of racism and misogyny, which has been protested in all 50 states and around the world. The tear gas utilized by police to clear away peaceful anti-racism protestors in Washington D.C. just so Trump could score cheap points with his religious voting base by being photographed in front of a church while brandishing a Bible tells you everything you need to know about his priorities. His blatant disinterest in Jesus’ teachings prove that his evangelical supporters have no moral leg to stand on, since they will clearly vote for anyone so long as the necessary political boxes are checked.

This is merely one of the latest examples of how the Bible has been used as a tool of oppression throughout the course of human history, and as the mantra of “We Must Be Better” continues to fill our streets as well as our conscience, it is imperative that organized religions embrace this unprecedented moment as an opportunity for transformative self-reflection. With June being Pride Month, Karslake’s latest film couldn’t be better timed as a therapeutic source of insight and healing for those viewers and their families who haven’t yet come to terms with the truth of their identity. Just as she did in “For the Bible Tells Me So,” editor Nancy Kennedy juxtaposes multiple stories of families whose sense of normalcy was upended by the revelation that one of their children was LGBTQ+. Gene Robinson, the first openly gay priest consecrated as a bishop, was featured prominently in the director’s previous film, and has a touching role here in the segment about trans activist Sarah McBride, his colleague at the Center for American Progress.

Both of Karslake’s movies have a cumulative power that reduces me to tears in the final reel. “For the Bible Tells Me So” concludes with a gay activist and his parents standing outside the headquarters of Focus on the Family, reading a statement meant for its absent founder James Dobson, before being arrested on the grounds of trespassing. Dobson’s championing of self-hatred cloaked in godliness has shattered countless lives, driving many of his unwitting victims to suicide by convincing them that their orientation is an abomination. Focus on the Family chillingly reemerges in the saddest story of “For They Know Not What They Do,” centering on devout parents Rob and Linda Robinson, who consider their gay son’s sexuality a “deal-breaker” with God. What I’ll remember perhaps most of all from this film is the sound of Linda’s voice, choked with emotion, as she recounts just how wrong she and her husband’s actions were, however well-intentioned.

Though you may think you know where each of the central narrative threads are headed, considering who is present among the talking heads and who is not, the stories don’t go necessarily in the direction one would expect. Among the subjects is Vico Baez Febo, a survivor of the Pulse nightclub massacre, which was the largest mass shooting in U.S. history at that time, and is now second only to the Las Vegas shooting that occurred the following year. In one of the most enraging bits of footage illustrating modern day fanaticism, the deaths of the 49 nightclub patrons are praised by Pastor Roger Jimenez of the Verity Baptist Church in Sacramento, who thanks the gunman for making Orlando a safer place. His appalling words encapsulate the fear-mongering tactics that have fueled hundreds of anti-LGBT bills introduced by the Trump Administration, along with the rescinding of bathroom bills hinging on the prejudicial belief that anyone who isn’t a heterosexual is a sexual deviant. If history has proven anything, it’s that those who are sexually repressed, particularly celibate priests, are the real danger, not people who are living their truth.

The film’s brisk 90-minute running time may be a strength in terms of pacing and accessibility, yet it also is somewhat of a limitation. This topic truly calls for the miniseries treatment, since so many of its facets warrant further exploration. I wish one of the subjects had been a trans woman of color, since they have been disproportionately affected by the epidemic of violence against the transgender community. Karslake does follow the story of a biracial trans man, Elliot Porcher, whose parents movingly recount their struggle to understand him. Elliot decided to come out after hearing about a trans teen who killed herself after being sent to conversion therapy, an inhumane practice that remains legal in many states. An entire film could be devoted to the evolution of Randy Thomas, former executive VP of the anti-gay organization Exodus International, who now admits that he was jealous of the openly gay community and is unsure whether he will ever forgive himself.

By respecting the spiritual journeys of his subjects, Karslake affirms that he is more concerned with reaching across the aisle than preaching to the choir. The jovial opening sequence of couples celebrating the legalization of same-sex marriage in 2015 illustrates the illusory nature of immediate change. The recent protests against systemic racism and prejudice in our country are not the end goal but the opening act, and we must all play a role in ensuring that the fight for equality not only persists, but is victorious. That can’t happen without uncomfortable, long-belated conversations being had with those on the other end of the ideological spectrum, and “For They Not Know What They Do” could serve as a welcome ice-breaker. 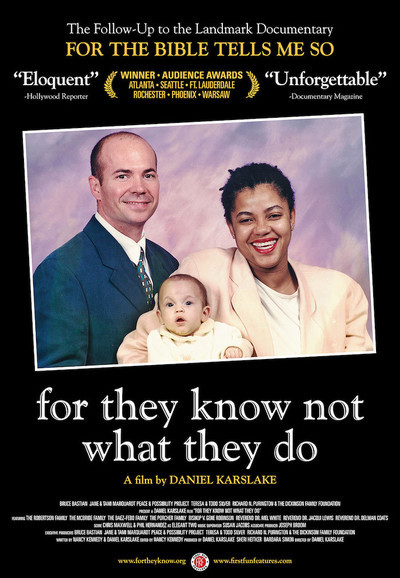