“For the Plasma” is a delightful oddity, an indie comedy with sci-fi twists and an indecipherable plot. It’s part Jacques Rivette, part Shane Carruth, and part Wes Anderson. It might be part Tommy Wiseau too. With deadpan line readings that seem purposefully affected, it’s a film that plays with our instinct to look for meaning in imagery, and the baggage we bring to a movie. In fact, that’s what it’s about—someone trying to read images of the natural world as something greater. She even says, and it could be to us as viewers as much as the character to whom she’s speaking, “I just need you to look, to describe within the frame.” For viewers hoping to assemble a greater meaning from multiple frames, “For the Plasma” could be frustrating, but it’s so likable from moment to moment that its seemingly purposeful lack of coherence is forgivable. Just enjoy the frame.

Shot on gorgeous 16mm on almost no budget, most of “For the Plasma” takes place in a remote house in Maine, and the forest and bodies of water that surround it. In this distant location, a woman named Helen (Rosalie Lowe) monitors the area around her for forest fires, using CCTV to do so. Cameras have been set up on trees in the surrounding areas, and Helen watches the natural world through an “unnatural” device. Her friend Charlie (Anabelle LeMieux) arrives to help with the project, and learns that Helen has discovered that she can predict changes in global financial markets by looking at the trees through her cameras. She draws patterns in the morning’s financial sections—highlighting some words and blocking out others—and then “sees things” in the trees. She needs Charlie’s help with the project, but issues of their past friendship surface, at first reminding one of films like “Queen of Earth” and Tribeca’s “Always Shine,” but “For the Plasma” is not just a story about a unique female friendship. I haven’t even mentioned the ghosts or the men in suits or the lighthouse keeper.

Directors Bingham Bryant and Kyle Molzan playfully intercut imagery of coastal Maine with lo-fi security cameras and the footage they record. In a key, early conversation, Helen talks about her project to Charlie, discussing image vs. reality, and how meaning and intent change both. It’s the image of the tree versus the purpose of looking at the tree. She’s been hired to look at the tree to prevent forest fires. She is looking at that image to do so. Does the meaning of watching change when the intention changes? If she reads about finance and puts that in her head, does it change the process? Do things like “watching” and “intention” have pliable purpose? And what is the intent we bring to a film? From the minute we see these two characters meet, we’re trained to try and figure out their relationship, inclined to discern what’s behind them and predict what’s ahead, instead of just looking in the frame.

The great, synth score by Keiichi Suzuki adds to the oddity of the project, but it’s the awkward, stilted line readings that both enhance the charming strangeness of it all, and seem almost purposefully Wiseau-esque (the minute I took that note the two leads inexplicably started tossing a football back and forth on a walk-and-talk … so). When the lighthouse keeper shows up with a flashlight that he only turns on his face when he talks, you have to wonder if it’s a bad performance or one that’s directed to be purposefully off-putting. At one point, you can literally see him read cue cards as he delivers his lines straight to camera (and don’t get me started on the winking). It’s as bizarre a performance as you’ll see this year.

Some might understandably dismiss a film about a woman who predicts financial shifts from looking at images of trees, but we are a world that assigns meaning to images, especially when it comes to the way we analyze motion pictures. The meta-oddity of “For the Plasma” is certainly not for everyone, but it’s such a charmingly strange film, a movie that feels devoid of the cynicism that often plagues every genre from which it cribs, but particularly modern sci-fi and low-budget cinema. It is a movie that is happily strange, joyfully bizarre and particularly unforgettable. 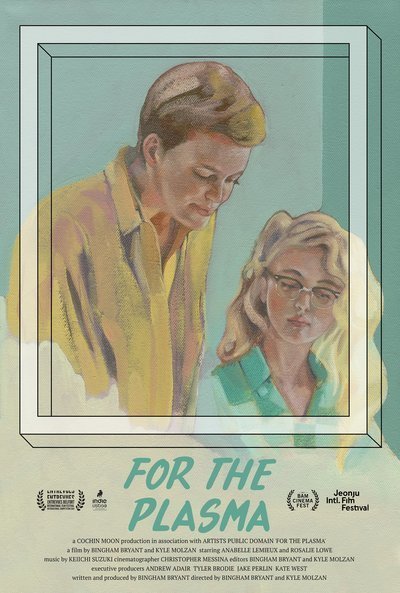