“Footnotes,” which has the title “Sue quell pied danser” in its native France (which is a nice play on words that gets lost in translation; the English title is a less memorable play on words) is a musical set in a realistic milieu that seems not necessarily conducive to musicals, and if you’re thinking, “Hey, some French people are trying to pull a ‘La La Land’,” no, not quite. And not only because the French release of “Footnotes” happened a good half-year before the world-wide release of “La La Land.”

No, “Footnotes” partakes of a French not-quite tradition that also inspired the multiple-award-winning Damien Chazelle picture. That is, the work of director Jacques Demy, who staged and filmed an all-sung love story filled with color but also a kind of narrative realism in his immortal early ‘60s “Umbrellas of Cherbourg.” And his movies in this mode were not without Hollywood influence, as Stanley Donen’s 1955 “It’s Always Fair Weather” testifies. (Demy cast that film’s all-American star Gene Kelly in his “Umbrellas” followup, “The Young Girls of Rochefort.”) All this historical mapping is going to distract me from my central inescapable point, which is that while “Footnotes” works up a certain provisional charm at moments, it’s too determinedly low key as a whole to make a really memorable impression.

The movie’s heroine, Julie (Pauline Etienne) is a scooter-riding free spirit who happens upon a job in a shoe factory in rural France. Jacques Couture, an apparently venerable outfit, is run by amiable but hapless Couture fils Félicien (François Morel) but overseen by a ruthless young corporate owner, Xavier (Loïc Corbery). Xavier is into downsizing—he brags to Félicien that his very slick wardrobe, “pied a tete,” was made in China, so why can’t Couture’s shoe’s be, too? A showdown is imminent, and the women workers threatened with firing decide to occupy the factory. Which action, among other things, puts a strain on Julie’s romance with hunky but cynical and opportunistic company trucker Samy (Olivier Chantreau).

For those of you with long memories of movie musicals, yes, this plot does sound a bit like “The Pajama Game.” But the vision of directors Paul Calori and Kostia Testut is far more naturalistic. The factory itself looks like something out of Godard’s “Passion,” and when the ladies sing a song of revolt on the floor, it’s slightly reminiscent of Lars von Trier’s “Dancer in the Dark” if that movie had been given a Xanax or ten. The performers are never glammed up, and the little visual touches of fantasy or wish fulfillment remain little throughout.

In fact, "little" is kind of this film’s biggest problem. The emphasis on naturalism gives the movie a very slight feel. So does them music itself. Written by Olivier Daviaud, it’s pleasant, small-band stuff, with tuneful melodies and some tame samba rhythms. As such, it never really takes off—it’s so trifling you can almost believe that these are in fact songs that ordinary people might break into for not reason, just as an exercise. This is not how it’s supposed to work in musicals. Not to mention that the lyrics sometimes oddly contradict the characters themselves. Félicien, for instance, gets to play the soul of integrity in his Paris negotiations with Xavier, but once he’s back at the warehouse, he sings a little ditty of self-entitlement, expressing a belief that he deserves the finer things in life because he’s a boss. (I should compliment whoever did the English translation subtitles for this French-language movie, which retains the rhyme schemes of the French lyrics, for instance, “It’s about getting your point across/when you’re the boss.”) This sounds like a quibble and maybe it is, but in a movie so largely fluffy you don’t want to be asking the question “Who, really, is this guy, anyway?”

The performers get their jobs done without leaving much of an impression. In terms of who or what “Footnotes” can win over, I think only hardcore Francophiles will find its charms genuinely compelling. 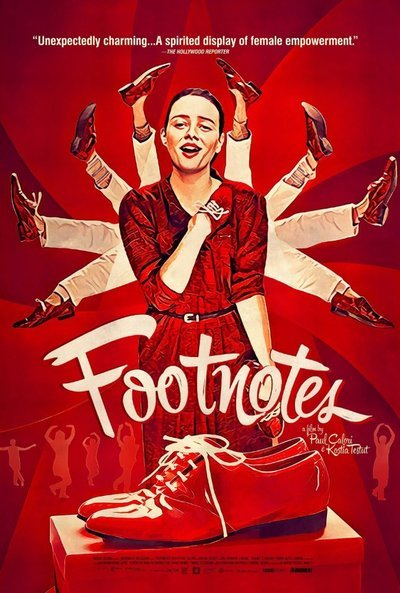