“Flux Gourmet” is an out-of-control movie about people who are constantly trying to gain some sort of control, either over each other or whatever they got going on inside of them.

The movie’s narrator, Stones (Makis Papadimitriou), falls in the latter camp. He’s a meek, pudgy journalist who’s been hired by the Sonic Catering Institute, a remote art organization devoted to extracting sounds from various foods. He mostly tails a “culinary collective” of avant-garde artists doing a residency at the institute, documenting everything from their process to their performances.

The trio of artists is led by the self-absorbed and uncompromising Elle di Elle (Fatma Mohamed). Along with her partners Billy (Asa Butterfield) and Lamina (Ariane Labed), Elle puts on provocative, performance art pieces for a fawning crowd. One piece has her withering on the floor naked, covered in a viscous red fluid, pretending to be a pig getting slaughtered by continually popping herself in the forehead with a microphone, while Billy and Lamina come up with jarring sounds in the background.

Unwavering and stubborn, Elle butts heads with everyone she comes in contact with. Throughout the movie, she is locked in a battle of wills with Jan Stevens (Gwendoline Christie), the institute’s extravagantly dressed director. When Stevens suggests lowering the volume on the flanger pedal during the aforementioned pig performance, Elle flat out refuses—even though she had no idea what a flanger is until Stevens brought it up.

All this is happening while Stones is quietly going through some health issues. With a foul stench emanating from his mouth and acid reflux bellowing in his digestive system, he’s in a constant state of discomfort. He spends his days and nights just trying not to break wind in a noisy, malodorous fashion.

Yeah, “Flux Gourmet” is an odd one. Distributed by IFC Midnight (aka the part of IFC Films that specializes in genre films and all things WTF), "Flux Gourmet" is being marketed as some sort of sick horror show. But a lot of what happens, no matter how deranged and/or baffling it gets, is played for satirical laughs.

Strickland characterizes Elle as a textbook Difficult Artist, continually fighting to maintain her independent integrity—even if it makes her look like a petulant tyrant. (Frequent Strickland regular Mohamed maintains a magnetic presence, even when she’s acting pedantic and unpleasant and doing things like eating pages from a cookbook she feels is a patriarchy-fueled fraud.) She’s surprisingly sympathetic to Stones’ gastrointestinal issues—I guess she sees another artist who’s “suffering” like her—eventually working his visits with the resident doctor (an amusingly snide Richard Bremmer) into his performances.

Elle is no match for the erudite Stevens, which Christie plays like an overzealous, emotionally fragile grande dame. Often covered in extravagant outfits that are most likely hers (anyone who’s seen photos of Christie at public events knows the woman goes all out), the former “Game of Thrones” standout cements her status as a Tilda Swinton-in-training with her stylish, eccentric turn. Halfway through this, Stevens even starts up a fling with Butterfield’s aloof Billy, usually doing a vulgar-but-uproarious move to keep him under her spell.

Strickland builds a crazy, sardonic world in “Flux Gourmet,” one where our GERD-stricken protagonist Stones seems to be the only sane, sympathetic person. He’s the odd man out in this tempestuously arty environment, trying to keep a low profile even when he’s forced to be the main, sometimes nude presentation. Stones’ real, medical struggle seems out of place in a movie where characters are mostly doing weird art stuff, like improv exercises where Stevens has Elle and her crew act out ridiculous scenarios at a market. Is this Strickland’s way of telling us that, in order to stay normal, you gotta at least learn to live with the abnormal? Honestly, I don’t know the answer to that or most of the questions in this strange movie. But I’d be lying if I say I wasn’t intrigued by it most of the time. 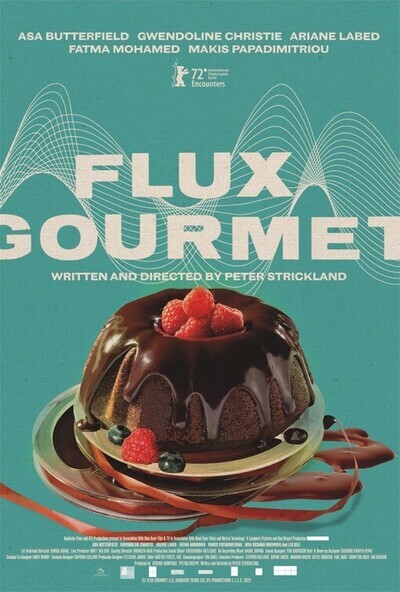