"Fitzwilly" is a pleasant family comedy about a butler who brings Gimbel's to a halt on Christmas Eve. Since this is Christmas Day (and a Merry Christmas to all our readers) I thought you might enjoy reading how it was done.

The trick is to station bell ringing Santas, carol singing Cub Scouts and package bearing matrons at all the exits to the store. Then you deploy last-minute shoppers inside, counting on them to elbow each other into a state of near riot. You assign two or three men to circulate counter-clockwise through the crowd, poking people, and two or three other operatives to circulate clockwise, dropping things that other people will stumble over. And then you stop the escalators.

If you are like me and do your shopping on Christmas Eve this will sound like a sworn statement on the actual condition in every store in the Loop. But there are probably people who do all their Christmas shopping in November, and for them "Fitzwilly" may seem to exaggerate.

The butler is Dick Van Dyke, and he attacks Gimbel's as part of a long-term effort to keep his elderly employer (Dame Edith Evans) living in the style to which she is accustomed. The old lady's millionaire husband left her without a cent. But her loyal staff has been shoplifting and hijacking ever since to keep up appearances.

A student from Columbia University (Barbara Feldon) is hired as Dame Edith's secretary. She must have been attending the Columbia Graduate School of Journalism, because she can't spell. That's OK, because Dame Edith is writing a dictionary in which all the incorrect spellings of words will be listed.

Events develop in a whimsical fashion, as Miss Feldon gradually discovers the larceny underfoot and gradually falls in love with Van Dyke. There is a retired minister (John McGiver) to add a note of wistful guilt to the undertakings, but the gang isn't really doing anything wrong, is it? After all, the loot is covered by insurance and the old lady gives all her money to charity. 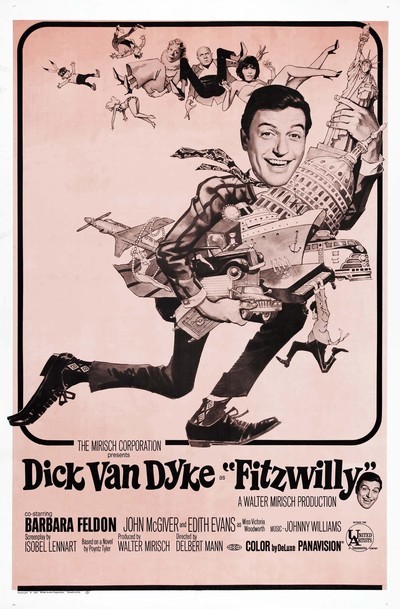