Film About a Father Who

Every father is a bundle of contradictions. But in Ira Sachs, Sr.'s case, the contradictions are more extreme than most. Filmmaker Lynne Sachs tries to make sense of them—up to a point—in "A Film About a Father Who," an unraveling of her family's complicated history, drawn from footage that she's been gathering between 1984 and the present day.

Known as "the Hugh Hefner of Park City," the Utah ski town where Robert Redford founded the Sundance Film Festival, Sachs at his life-force peak was a hotel developer, a devoted skier, a prodigious pot smoker, and a womanizer whose affairs ultimately produced nine children by five women. He emerges here as an infuriating but charismatic figure whose life holds many secrets, and who treats his children and ex-wife (and various girlfriends) with a mix of genuine warmth and shocking selfishness and manipulation.

The filmmaker has been directing movies for a long time, building an archive of experimental features and shorts. Some were offered, at the time this review was written, in a virtual film festival online at the Museum of the Moving Image in Queens, New York. Sachs is the sister of Ira Sachs ("Keep the Lights On," "Love is Strange"), and based on the interviews collected here, the whole extended family has an artistic and/or literary mindset even when they make a living some other way. We hear a lot about how playful, adventurous and bold the father was back in the day, but also how emotionally remote (one child says that he seemed to exist in a detached-seeming middle-ground, rarely manifesting extremes of euphoria/happiness or anger/sadness).

There's a lot of sardonic quipping about his sex life, which impacted the children (and his eventual ex-wife) in ways that troubled everyone but him. The ostensible trigger for this film was the 2016 revelation that there were two other children by yet another woman, beyond the ones who were already known about, their names blacked-out in an insurance document. The movie never gets into why this particular bit of information would shock the family into taking stock of things when the list of prior outrages and scandals was so prodigiously long. It's not a failing, exactly, but it does momentarily cause the viewer to ask questions that fall beyond the scope of the film itself. One of the director's siblings weeps as she talks of learning in youth that she had other siblings out there, but being made to wait to meet them, because her father was adamant that they not be connected until his own mother had passed on. Why? She wants to know. Why place such a restriction on truth? Who was being protected?

Kaleidoscopic in both its assortment of materials and its assemblage, this feature doesn't so much sort out and organize all the different aspects of the father's life as sift through them in a fixated, somewhat discombobulated way—like a detective poring over contents of a thick file that have spilled out all over the floor, properly impressed by how much work has to be done to even start to understand all the complexities. Or, to be more mundane, like a child who has learned a new, unpleasant truth about a parent, in addition to the other unpleasant truths she already knew, and is reeling in shock even as she tries to reframe the picture in a calm and rational way.

The array of formats displayed is so texturally diverse—encompassing Super 8mm and 16mm film, VHS and other low-resolution video formats, and more crisp, high-definition digital video in recent scenes—that the movie is always fascinating, even when it seems to lose or drop the threads of therapeutic/psychological understanding woven throughout the project.

It's sometimes hard to tell if the fragmentation in the story and the more atmospheric and/or dislocating touches (such as sound dropouts, and dialogue-as-narration by witnesses who are heard speaking over silent footage of people in earlier time periods, sometimes with their own lips moving) are urgently necessary to aid our understanding and feeling, or if they are vestigial outgrowths of the way an experimental filmmaker typically works (intuitively and viscerally, without obsessing over linear clarity). But there's no denying that these sometimes alienating touches add to our sense of the father as a towering presence in the lives of his children, not always for noble reasons.

One of the most striking things about the movie is how it reveals the way in which all adult children feel forever small when contemplating the life experience of their parents: the brave or reckless choices, the beneficial and destructive outcomes, the redactions and blank spots, and the mysteries that will never be solved. 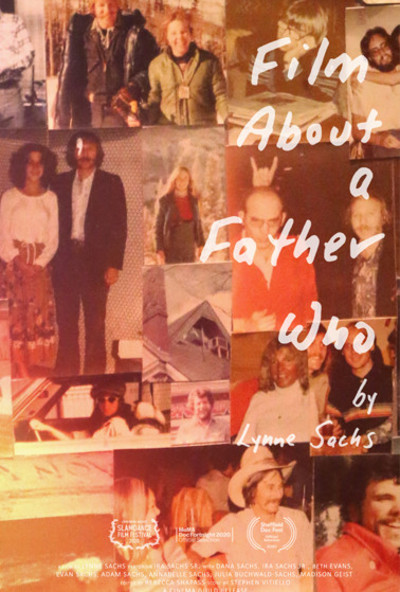