Feast of the Seven Fishes

“Feast of the Seven Fishes” is based on a graphic novel/cookbook by director Robert Tinnell. Only once does Tinnell pay tribute to his screenplay’s origin; there’s a moment where the townscape suddenly erupts with cartoon bubbles flying over houses. But he repeatedly returns to the preparation and consumption of food, specifically the meal in the title. The cooking scenes comprise the best moments in this episodic film. The Oliverio family kitchen is blessed with brothers Carmine (Ray Abruzzo), Johnny (Paul Ben-Victor) and Frankie (Joe Pantoliano). Johnny runs the show, ruling with an inflexibility the overtaxed Johnny complains about, while Carmine smokes his stogie and playfully tries to get out of work. The trio are the keepers of an Italian Christmas tradition that goes back at least 100 years. As the day progresses, several other family members and friends join in, assisting in this gigantic endeavor while good-naturedly ribbing each other.

One of the people who shows up to help is Katie (Addison Timlin). She’s the only first-timer at the Oliverio house, a friend of a friend who’s caught the eye of Tony (Skyler Gisondo). Part of the youngest generation, Tony is torn between dream of art school and his expected role as the future heir of the family butcher shop. After years of expensive private schools, Katie has escaped the West Virginia town of her birth to attend an Ivy League university. Several times in “Feast of the Seven Fishes,” someone refers to Katie as a “cake-eater,” a slang term I had to look up in Urban Dictionary. It apparently means “someone rich enough to have their cake and eat it too.” Upon meeting Katie, Tony’s great-grandmother Nonnie (Lynn Cohen) calls her something else in Italian: a “puttana.” I didn’t have to look that one up.

Tony’s burgeoning relationship with Katie is complicated by his past with the equally blonde Beth (Madison Iseman). Beth is still so hung up her ex that she performs stunts like working at a strip club to trigger Tony’s protective side. The stripper stunt occurs while Tony is out on his double date with Katie, their mutual friend Sarah (Jessica Darrow) and her boyfriend, Angelo (Andrew Schulz). This scene, and several others featuring Beth, veer dangerously close to the teenage sex comedy genre popular in this film’s 1983 timeline. Thankfully, Iseman is allowed to reveal more complex shadings in later scenes. Beth finds a kindred spirit in the town’s resident nerdy intellectual, Juke (Josh Helman). Besides being thoughtful and observant of his friends’ trials and tribulations, Juke is also the recipient of an amusing running gag that most certainly feels ported from a 1983 comedy.

Since it’s in the holiday movie subgenre, “Feast of the Seven Fishes” has themes about family, finding romantic love and the fear of being alone on Christmas. Movies of this ilk often tend to be intolerable, but Tinnell pulls us from the abyss in two ways. First, he establishes an immersive feel for the town where his characters live. There’s a tinge of rose-colored glasses-style nostalgia present, but it’s balanced out with the genuine love one feels for their hometown. We become familiar with the bar where his teenaged characters drink (the drinking age was 18 until 1986), the inside of everyone’s houses, and the geographical lay of the land.

Second, Tinnell often pairs Tony and Katie, who have the blandest storyline, with far more interesting people who liven up their arc. Katie has a great scene of conspiratorial revenge with Frankie and a tense church scene with Nonnie. The latter has Nonnie threatening to put the evil eye on anybody who’d hurt Tony’s feelings. Both wind up in the Oliverio’s kitchen, where the cooking brothers put them on the spot and tease out character development details. Gisondo and Timlin give good performances, but Cohen, Helman, Abruzzo, Pantoliano and Ben-Victor outshine them. The latter three would be perfect in a cooking movie spin-off.

Speaking of which, the food scenes are a major asset here. There are several montages where food is either being cooked or explained to the viewer. It works better if you like seafood, though that’s not a prerequisite. Just like at your own real-life holiday get together, the dishes look good enough to make you forget the drama happening around the dinner table. As far as Christmas romance movies go, “Feast of the Seven Fishes” is quite watchable, funny in several spots and sweetly poignant in others. Not everything works, but what does works well enough to recommend it. 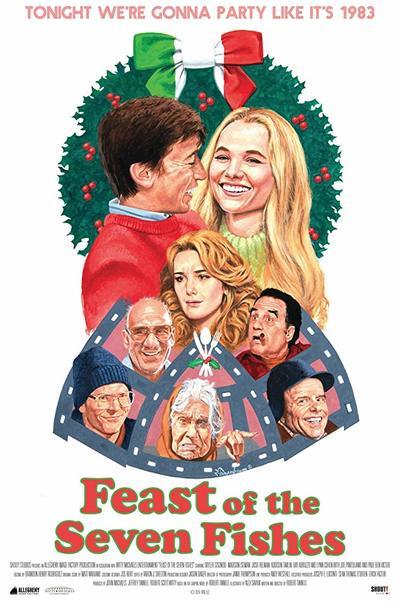