Far From the Madding Crowd

One of the co-founders of the stripped-down Dogme 95 aesthetic might not sound like the most logical choice to direct Thomas Hardy’s classic, sweeping romance “Far From the Madding Crowd.”

But Thomas Vinterberg creates a rich aesthetic that combines both vibrant colors and intimate natural light. Whether his film is lush or rolling in the muck, it always has a tactile quality that makes it accessible, which is also true of the performances from his (mostly) well-chosen cast.

Carey Mulligan is radiant as the fiercely independent Bathsheba Everdene, a literary heroine who remains so vital, she inspired author Suzanne Collins when she was choosing a last name for the courageous Katniss in the “Hunger Games” series. Mulligan plays the part quite differently from Julie Christie, who was luminous but a bit more flirty and playful when she starred as Bathsheba in John Schlesinger’s 1967 adaptation of the novel (which was a bit of a slog at nearly three hours). Christie’s Bathsheba used her girlishness and dazzling looks to assert herself in male-dominated Victorian England.

Mulligan’s simply does not care what anyone thinks of her, which makes her even more exciting to watch. She’ll seek someone’s advice, but she probably won’t follow it—especially when it comes to the complicated love life she never thought she wanted. After strong work in such eclectic films as “An Education” (which earned her an Oscar nomination), “Drive,” “Never Let Me Go” and “Inside Llewyn Davis,” this might just be the performance of her career. There’s power behind the depth of her voice that provides a fascinating contradiction with her birdlike frame, and a directness to her that’s reminiscent of a young Katharine Hepburn.

When Bathsheba tells the staff of the farm she’s recently inherited, “It is my intention to astonish you all”—in a bit of a tweak of that famous line from screenwriter David Nicholls—her conviction is clear. Bathsheba’s path to happiness, however, is far more circuitous.

“Far From the Madding Crowd” is all about the capriciousness of fate, and the way it can drastically alter the trajectory of a young woman who thinks she knows exactly what she wants in a place that's meant to be sedate and safe. You lose a scarf in the woods, or you show up at the wrong church for a wedding, or you send an impetuous valentine to a near stranger and suddenly, several lives have changed. Cinematographer Charlotte Bruus Christensen captures the equally variable rural surroundings with breathtaking style, from lens flares on a sunny day and verdant, rolling hills to pinky-purple sunsets and morning streaks of misty light.

At the film’s start, the orphaned but educated Bathsheba is living on a farm with her aunt in 1870 Dorset, about 200 miles outside London. When we first see her, she’s riding exuberantly across the countryside on horseback before leaning backward nimbly to avoid the scrapes of tree branches. (It’s all so symbolic, this early attempt to emerge unscathed.)

But the beautiful Bathsheba catches the eye of a nearby sheep farmer, a gentle giant named Gabriel Oak (Matthias Schoenaerts). Her freedom is the very quality about her that appeals to him; he quickly asks her to marry him and is quickly rejected. Schoenaerts, the Belgian star of the Oscar-nominated “Bullhead” and the Marion Cotillard drama “Rust and Bone,” offers an ideal combination of physicality and sensitivity, and he has strong chemistry with Mulligan from the start.

Gabriel and Bathsheba’s paths soon cross again, though, when he loses his flock in disastrous fashion and she inherits a farm from her beloved, deceased uncle. Suddenly, she’s a landowner—and she happens to need a sheepherder. At the same time, she connects (sort of) with the neighboring landowner, the wealthy and socially awkward bachelor William Boldwood (Michael Sheen), inadvertently enlivening sensations in him he never previously knew. Sheen, the veteran of the cast, prompts great sympathy for this lonely but insistent middle-aged man. If the great Peter Finch was more of a wild-eyed, creepy stalker in the last incarnation of “Far From the Madding Crowd,” Sheen makes you want to give him a hug. When Boldwood asks Bathsheba to marry him—and, like Gabriel, offers her a piano as part of the deal—her response is beautiful but brutal: “I have a piano. And I have my own farm. And I have no need for a husband."

But then she meets Bachelor No. 3—the arrogant and attractive Sgt. Frank Troy (Tom Sturridge)—and suddenly, all her proclamations of self-sufficiency go out the window. In tackling the task of adapting Hardy’s text, Nicholls has abbreviated quite a bit and spelled out some emotions and motivations to expedite matters. Except for a few gaps, this mostly works, and it helps contribute to the film’s surprisingly brisk, engaging pace. But he was wise to retain the famous scene where Sgt. Troy shows off his swordsmanship in the woods, thrusting at Bathsheba from every possible angle in his regal, red uniform, leaving her breathless.

It is not exactly the subtlest form of foreplay, but it is the boldest moment in Sturridge’s otherwise strangely restrained performance. Terence Stamp was a force of nature in the role opposite Christie; he was confident and charismatic, obviously dangerous and untrustworthy but irresistible all the same. He was a sexy cad, while Sturridge is more of a pouty lad. It’s hard to believe this is the man who sweeps the headstrong Bathsheba off her feet.

Along those lines, Troy’s previous relationship with a servant from Bathsheba’s farm, which is so crucial to understanding his actions, gets short shrift here. It’s a casualty of the screenplay’s cuts and it reduces the presence of the appealing Juno Temple to glorified-cameo status.

Still, Gabriel is clearly the man who’s meant for Bathsheba of all the potential suitors pining for her affections. While Boldwood is too prudent and Troy is too much of a party boy, Gabriel obviously represents the middle ground between those extremes. But it’s not about the destination; rather, it’s about the shared friendship, respect and trust that create the foundation for a love that was always meant to be.

Just try to stop yourself from swooning. 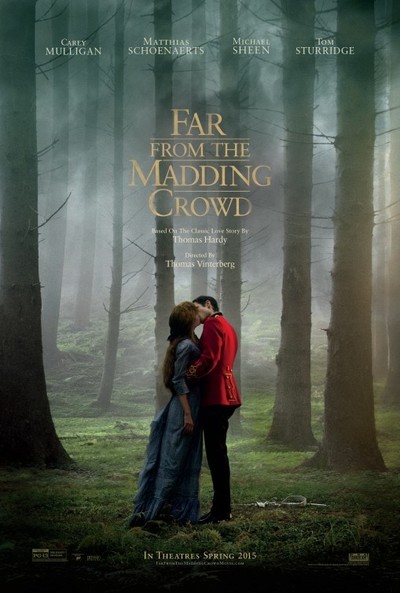