Isabelle Huppert has been making movies for over 45 years now and as far as I can readily recall, I have yet to see her give a bad performance in one of them. Granted, I have not seen nearly all of the 100+ films that she had made during that time and this is not say that all of the ones that I have been able to view have been top-notch masterworks of the cinema either. However, in the reasonably significant number of titles that I have been able to view, I have never seen her turn in a performance that wasn’t focused and that didn’t liven up whatever project she was involved in—I once saw her in a project that was inexplicably produced under the aegis of the WWE and even that one perked up a bit whenever she was on camera. Presumably opening in the U.S. to capitalize on the resurgence of interest in Huppert following her Oscar-nominated turn in “Elle,” “False Confessions” will not go down in the books as one of her top-tier projects—it is an odd and not entirely successful one that's more intriguing for the circumstances surrounding its production than for anything depicted on the screen—but even so, Huppert is still there plugging away in every scene. To the extent that "False Confessions" does intermittently succeed, it is due almost entirely to her efforts.

Based on the play “Les fausses confidences” by acclaimed French writer Pierre Carlet de Chamberlain de Marivaux, the film tells the story of Dorante (Louis Garrel), a once-prosperous young man who has recently suffered financial ruin. Through his former valet, Dubois (Yves Jacques), he hears that Araminte (Huppert), the rich and beautiful widow that he not-so-secretly loves (a conceit that is especially amusing if you saw “Ma Mere,” a twisted 2004 drama costarring Huppert and Garrel), is looking for a new private secretary and uses the connection of his uncle, Monsieur Remy (Bernard Verley), who is Araminte’s lawyer, to secure the position. As it turns out, Dorante’s arrival is enough to throw the best-laid plans of a number of people into chaos and confusion. For starters, Araminte is facing a legal proceeding with Count Dorimont (Jean-Pierre Malo) over a piece of land she owns—of course, if Araminte agrees to marry him, the Count is willing to drop things. Araminte has no desire to marry him but her ambitious and self-absorbed mother (Bulle Ogier) is determined to see the wedding happen and demands that Dorante, whom Araminte has asked to advise as to whether she is likely to prevail in court, tell her that she is doomed to lose regardless of his findings. Complicating matters further, Remy has decided that his nephew should marry Araminte’s servant, Marton (Manon Combes), who has been promised a significant sum of money by Count Dorimont to be paid to her after he marries Araminte himself.

The film was made by the late Swiss theater director Luc Bondy, who passed away before his work on it was completed, and therein lies an interesting tale surrounding the film’s production. For this third screen adaptation of Marivaux’s play, following versions made in 1984 and 2010, Bondy elected to deliberately blur the lines between cinema and theatre by doing both at the same time—during the day, he shot the film in and around Paris’s legendary Odeon Theater and during the evening, he staged the play at the same location with the same script and actors, though supposedly with different costumes. For most of the film’s running time, this is an aspect that will largely be overlooked by viewers who did not see the play during its stagings in 2014 and 2015 or have no inkling as to its backstory. But Bondy does give away the game to a degree at the end by having the final scenes play out on and behind the curtain of the actual Odeon stage.

This approach is interesting enough, I suppose, and the actors go through their comedic and dramatic paces like cogs in a well-oiled machine. But it never really takes off as a film. For starters, the visual style is as forgettable as can be, which is surprising considering the fact that it was shot by Luciano Tovoli, the great cinematographer best known for his memorable collaborations with the likes of Dario Argento (“Suspiria”), Barbet Schroeder (“Reversal of Fortune”) and Julie Taymor (“Titus”). A bigger problem, however, is Bondy’s curious decision to use Marivaux’s original text from 1737, but instead of making it a period piece, he has set it in a contemporary world filled with modern cars, clothes and exercise equipment. If Bondy utilized the clash between the play and the current-day trappings as a way of comparing and contrasting the attitudes and ideas that Marivaux was exploring with modern sensibilities, that might have resulted in something interesting. Unfortunately, there doesn’t seem to be any particular governing idea behind this conceit and the end result is more pointlessly jarring than it is edifying.

That said, the only reason most audiences will be going to see “False Confessions,” in the United States at least (unless there is a heretofore unsuspected Marivaux revival on the horizon), is to see Huppert. In that regard, the film does not disappoint. Her work here may seem slight, especially coming as it does in the wake of her career-defining work in “Elle,” but she is never less than completely watchable here. Araminte is certainly a lighter role than she usually plays and it is nice to see her having fun with its more humorous aspects, such as a hilarious bit in which she flings some crumpled-up wrapping paper at her always-irritating mother and the singularly ridiculous exercise outfit that she is seen wearing at another point. At the same time, when the material occasionally shifts from the borderline farcical into a more serious mode, she is able to make that leap in tone without any obvious effort and brings a genuine dramatic heft to these moments without throwing things completely out of wack. Watching her go through her paces in “False Confessions,” you can tell that she has clearly committed herself to this odd project—too bad that she apparently got more out of it in the end than most audiences will. 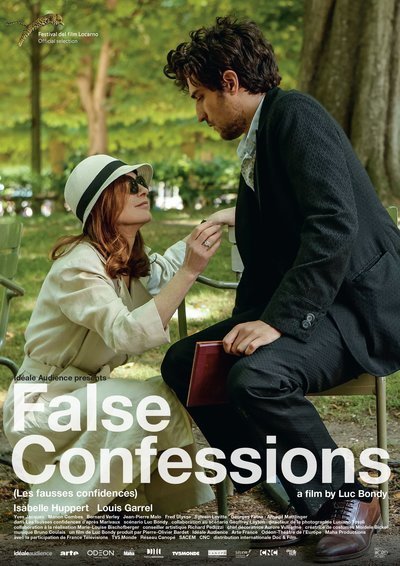