"Falling" is a hard film to watch because its central situation is so hard to endure.

Viggo Mortensen is John, a middle-aged corporate jet pilot who lives in California with a loving husband Eric (Terry Chen) and an adopted daughter, Mónica (Gabby Velis). Lance Henriksen is Willis, John's father, who still lives on a farm in upstate New York where John and his sister grew up, alone save for his horses, his dementia, and his rage.

From its first scene, "Falling" tells us what we're in for, and it's not an afternoon at Disney World. A sleeping Willis bolts awake during an airplane ride with John, who's taking him to California in a half-baked plan to buy him a house there, and begins stalking the aisle, shouting profanity and bellowing for his wife, who died years ago. He grabs the remains of a drink from another passenger's tray and downs it; that the passenger is Black makes you brace for a torrent of epithets that never comes, thankfully, although subsequent scenes confirm that you weren't wrong to suspect Willis of being capable of that. John trails the old man, trying to calm him down. You can tell by the reactions of passengers and crew that some of them have no idea what's happening and others know all too well. Finally Willis shuts himself in the men's room and almost manages to smoke a cigarette, something that hasn't been allowed on flights in decades.

What follows is a domestic drama focused on the never-healthy relationship between the father, a volcano of dark emotions, and his son, who responds to the old man's attacks with patience, kindness, and a room-temperature voice. Anybody who's tried to care for a loved one with dementia—especially one who was unlikable when they were still lucid—will recognize the situation that John's been put in. He feels an innate familial loyalty, plus he's a good man. He's not going to abandon his father. But there's only so much a person can take.

Mortensen makes his debut as a feature filmmaker here, writing the script, directing the movie, and composing and performing the film's score with Buckethead, his regular collaborators. It's impressive work all around. He has a sure hand and mostly excellent judgment.

And he guides his lead actor, Henriksen, to the richest lead performance of his long and distinguished career. He's fully inhabiting a desperate, at times desperately alienating character: bitter and lacerating, a poison to those who love him best, raging against the dying of the light and everyone and everything else as well; yet also secretly a sentimentalist who gets lost in his own thoughts, particularly his memories of his wife and kids before he snapped his bond with them. As Willis's mind recedes into the past, his scowl softens and his eyes grow wet with the tears he's too macho to let himself cry. When people try to talk him off anger's ledge, Willis bats a hand close his own face, as if to swat a buzzing mosquito—a theatrical touch that feels natural and right the way Henriksen does it. It's impossible to overstate how great he is here, in a fecund role imagined by the filmmaker. This sundowning bully is King Lear minus a child, and with no kingdom to bestow: just a farm and some horses.

The most remarkable thing about "Falling" is not just how deftly Mortensen handles the cast (including Laura Linney as John's kid sister) but how he navigates point-of-view. Part of the story takes place in the 1960s and '70s, when John was a child and then a teenager, and the rest takes place in the present, and there are times when the movie goes inside the minds of Willis and John. Jumping between past and present, and often letting the sound drop out so that we can understand what's at stake in a scene or sequence just by watching people's body language in a sort of "silent movie" montage with music, this is not a typical "finally the actor directs" debut, where the camera is treated as a recording device for people standing there saying lines.

The story is told in solid shots (by Marcel Zyskind) that are unaffectedly beautiful, never superficially pretty, edited by Ronald Sanders in such a way as to make each shot seem to lead to the next as one thought leads to another in your mind. You can always guess why one image gave way to a second and third, based on similarity of objects (a drinking glass or a knotted necktie in the present and the past) or texture (rain, a river, ocean waves). It's poetic, not in the woozy, imprecise, mystical sense in which people often mean that word, but rather that, if you wrote down a list of all the shots in the movie's best and most striking scenes, in order, concentrating only on describing what's in them, you'd have a poem.

Mortensen sometimes fumbles the characterizations, erring mainly on the side of flatness. Despite their one-note nature in terms of onscreen temperature and energy, John and Willis are well-rounded men who keep showing us new shadings, but the supporting players (particularly Chen, and Linney, who has one strong scene as Sarah and then disappears) operate mostly in a reactive, borderline-horrified mode thanks to the old man's ceaseless torrent of insults, some of them misogynistic, racist and homophobic (he never forgave his son for being gay).

The drama flows in just one direction, towards the inevitable and necessary moment when John finally breaks and tells his dad how he really feels about taking care of him, about growing up with him, about the abominable way that he treated their mother and his sister (flashbacks feature Sverrir Gudnason as the young Willis, Hannah Gross as his wife Gwen, and a succession of young actors as the kids). When you get to that point, though, you'll be justified in asking if that's all there was to it. The film’s climax is insightfully written and acted with great honesty and force (especially by Mortensen, who seems as if he's exorcising some of his own demons), but it takes two hours to get there, and it's a bumpy ride through a forest of thorns.

This is not the kind of film you put on during a holiday when you want something that the extended family can relax and enjoy. This is bitter, sharp stuff, verging on the Paul Schrader film "Affliction" but without the murder plot. There's a lunch on a patio that goes on for several minutes that could be classified as a torture scene even though no one raises a hand. And even after giving Henriksen his due, for inhabiting a career-capping lead performance as a snide, leathery coot who probably only has a few good years left but can't see himself, his children or his grandchildren clearly enough to enjoy them, you still might come away thinking, "What a horrible man—I'm glad I don't have to spend another second with him."

But in fairness, the movie never quite asks you to feel sympathy for Willis. For the most part, it takes a "He made his bed and he's been lying in it for decades" attitude. It gets inside his mind. He's a mid-twentieth century conservative American white man who spent most of his life on a farm in the middle of nowhere, where he could be the king of his little castle. And now the fiefdom is gone. He's got nothing left but his own reflection, and when he looks at it, all he sees is a past that never was. It's a tragedy of ordinary proportions. 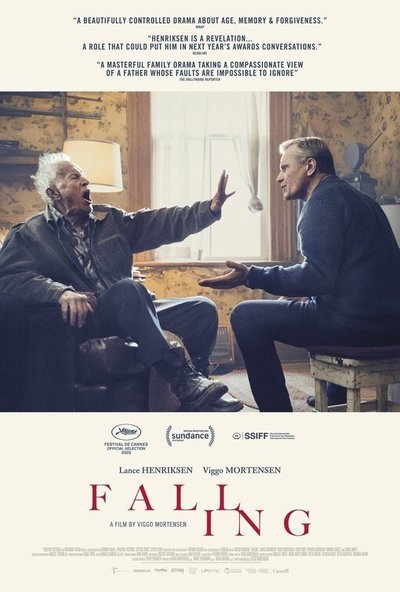