Every year as we turn back our clocks and woodsmoke fills the crisp air, Christmas movies begin to fill the airwaves. While Hallmark started their barrage of cinematic holiday treats as early as October this year, Netflix waited until November to begin their annual slate of romantic snow-filled sleigh rides. Leading the way is “Falling for Christmas,” featuring the return of Lindsay Lohan in her first lead role since Paul Schrader’s “The Canyons” nearly a decade ago.

The directorial debut of co-writer Janeen Damian, whose filmography includes writing and producing a half-dozen holiday films, is generic, yet charming, following the well-worn template of a city girl finding love and simpler life in the country.

Like a tinsel-covered twist on “Overboard,” Lohan plays a hotel heiress named Sierra Belmont who finds herself in just this kind of situation. Offered the position of “Vice President of Atmosphere” at her father’s exclusive ski chalet, she’s there a week before Christmas to let him know she doesn’t think the position is the right fit for her, even though she doesn’t know what else she should be doing with her life instead. All she knows is she wants to be known for more than her father’s last name.

Decked out in gorgeous monocolor ensembles designed by Emerson Alvarez, like the daring red jumpsuit featured on the poster and a fuchsia snowsuit, Lohan embodies this character like a softer version of Sigourney Weaver’s character in “Working Girl.” She’s good-natured, but she does bark orders like someone whose privilege comes second nature. Lohan is at her best in this half of the film, which allows her natural comedic chops to shine.

On her way to meet her vapid social media influencer boyfriend Tad (George Young), Sierra meets cute with Jake (Chord Overstreet), the owner of a much smaller, struggling resort on the same mountain. He runs into her while holding a cup of hot cocoa given to him after Sierra’s father Beauregard (Jack Wagner) declines to invest in his business. Lohan screeching “My Valenyagi” over and over after a dollop of whipped cream finds its way onto her lapel is pure camp.

This unlikely duo, of course, meet again after a disastrous off-the-grid engagement photo shoot ends with Sierra and Tad toppling down a remote mountain. While taking tourists on an idyllic sleigh ride, Jake finds the now amnesiac Sierra, head-based into a tree, while Tad finds himself spending four days with a survivalist named Ralph (Sean J. Dillingham).

All this is established with a breakneck screwball pace in the first ten minutes, with Lohan more than capable of maintaining the prescribed rat-a-tat dialogue needed to pull off the tone. She even goes all in on a few slapstick moments that don’t quite work but add a nice wackiness that balances out some of the film’s more saccharine tendencies. As Tad, Young is absolutely hilarious, spewing out absurd lines with the utmost sincerity, which couple nicely with the broad comedy his self-obsessed character demands. If only the film had kept this zany style throughout, it could have transcended its trappings to become a new classic.

The film clearly knows Christmas movies past, with homages to films like “Christmas In Connecticut” and “It’s A Wonderful Life” peppered throughout. However, unlike those classics, “Falling For Christmas”’s romance plot is woefully uninteresting. Jake’s a widower, whose overly precocious daughter Avy (Olivia Perez) has made a wish that Jake find love. A mischievous-looking Santa selling roasted chestnuts appear to magically bring Sierra—in her amnesiac state called Sarah—into Jake’s life. As he teaches her that there is “something special about simple things,” she helps him open up to love again. Cue the syrupy music.

This would all be fine if “Glee” alum Overstreet’s Jake had any kind of pizzazz. Lohan is game, clearly having a blast surrounded by all the holly and ivy and whimsical Christmas magic. Yet, Overstreet is stuck as a bland “nice” guy with all his edges neatly sanded off. His supposed long-standing grief over his deceased wife barely registers beyond a shallow glint in his eyes. Even Chase Ramsey in a few brief scenes as Sierra’s new assistant Terry has more chemistry with Lohan than her leading man.

Still, Overstreet’s drabness aside, there is a warmth to this film that's hard to resist. While veritable Christmas classics are like antique glass ornaments passed down from generation to generation and placed every year with care on the family tree, the television Christmas movie complex tends to pump out movies that are more like disposable tissue paper, good for one use only. “Falling For Christmas” lands somewhere in the middle of this scale. It’s more like a reusable ribbon bow. It's not great. It's nothing special. But you can keep it year after year and place it on presents as long as you have scotch tape—or Lohan’s irrepressible charm—to hold it together.

And as far as those kinds of semi-disposable holiday films go, Netflix has been producing some of the better ones. Films like Mary Lambert's Scotland-set “A Castle For Christmas” starring Brooke Shields and Cary Elwes, which, per the Netflix Christmas Universe rule that states a movie from the previous year is featured on a TV screen in the latest installment, is shown briefly when Sierra first wakes up in Jake’s resort. Both films are elevated by the star power of their leads and their directors’ clear love of Christmas traditions and aesthetics.

Fans of Lohan or/and breezy holiday films will surely find something to love here, but those whose tolerance for this kind of treacle is low at best should probably sit this one out. 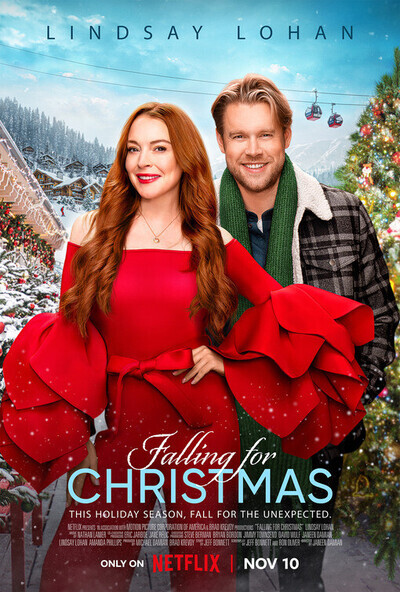