Michael Moore is angry again. In fact, Michael Moore may be angrier than he’s ever been. And while a lot of that rage is directed at Donald Trump, it’s probably less than people who have already commented on this review without seeing the film may expect if they ever choose to watch it. Moore’s outrage machine is not aimed directly at the 45th President of the United States, but at, well, pretty much everyone. In asking how we got to this point in American history, a point in which some people are questioning how much longer we will have a democracy (or if we even still do), Moore points the finger everywhere, castigating a system that disenfranchises voters, mistreats its poor, and allows corruption to flourish. He basically paints a portrait of a society that laid out the red carpet for Trump, and practically doesn’t even blame him for choosing to walk it. The scattershot approach sometimes works to the detriment of his message, but “Fahrenheit 11/9” is ultimately Moore’s best film in years because its message is really simple and nonpartisan: get mad about something and do something about it.

Here’s another fact about “Fahrenheit 11/9” that those who have partisan hatred for Moore probably don’t believe: its Trump material is actually its weakest. It starts with the days just before the election, when the world was told that Hillary Clinton was going to be the next President. There was no doubt. Footage of women crying after casting votes for her borders on cruel, and we’ve seen the nightmare that unfolded at her “victory” party over and over again. If I never hear “Fight Song” again it will be too soon. With a long lead-up, Moore asks the question, “How the fuck did this happen?”

Moore then rushes through the history of Trump with such a manic approach that it’s almost hard to follow. From the role Gwen Stefani played in his Presidency to how creepy Trump can sometimes be with his daughter Ivanka to his history with the Central Park Five, there’s a bam-bam-bam approach to the first few sequences in “Fahrenheit 11/9” that had me nervous that the entire film would unfold in this scattershot manner. With the Trump Presidency being analyzed in real-time, what could a documentary about him possibly add to the conversation?

The good news is that Moore doesn’t exactly take the approach you might expect. “Fahrenheit 11/9” improves when it settles down in a place that Moore knows very well: Flint, Michigan. There’s a doc-within-a-doc here about the water crisis in Flint that’s some of Moore’s best work in years. He presents the case of the downright criminal behavior that went down in Flint in stark, terrifying terms, speaking to a pediatrician about the lead levels in the water and even trying to perform a citizen’s arrest on Governor Rick Snyder. He ties this to Trump by pointing out that Snyder got away with it, and wondering if that inspired Trump to operate in previously unimaginable ways in plain sight. Snyder basically allowed citizens of his own state to be poisoned and lied when confronted about it. It does seem to be out of the Trump playbook. And Moore doesn’t let Obama off the hook either, pointing out how horrendously he handled the situation when he finally decided to visit Flint. Moore even points a finger back at himself, showing a great clip during which he was a guest on Roseanne Barr’s show with, believe it or not, Donald Trump. He played along with the Trump routine then, as so many did in the years before he became President. Moore's point is that we all knew who Trump was, we just didn't seem to care.

“Fahrenheit 11/9” gains focus and strength when it expands to other issues that clearly matter to Moore, and really should matter to everyone, including a teachers' strike in West Virginia and the Parkland kids. Of course, Moore is too inherently polarizing for some people to see this film, but there are more outright inarguable points here than in a lot of his other work. Shouldn’t issues like water that doesn’t poison our children, teachers making enough money to be above the poverty line, and a way to stop school shootings be issues that everyone, regardless of party, gets behind? Moore is basically saying to people that the system—both Republican and Democrat—is broken. Whether it’s the Bernie Sanders voters defeated by a superdelegate system they deem unfair or the disdain with which Moore views the complacency of the Democratic power structure, he takes no prisoners here. The answer to the “how did we get here” question is really that we have a system that has disenfranchised voters at an alarming rate. If you can’t do anything when my kid is lead-poisoned by his drinking water, what good is a vote going to do?

While I can relate to Moore’s frustration and admire his passion, it does feel like there’s a tighter, more focused version of “Fahrenheit 11/9” buried within this two-hour one. And yet the messiness of Moore’s film starts to feel appropriate for the times we’re in. With a new issue being debated every day, is it any wonder that “Fahrenheit 11/9” has an everything-and-the-kitchen-sink approach? After all, Moore argues, rather convincingly, that what matters is that we care about something. It’s when people stay quiet and issues become white noise, that societies crumble and despots rise to power. And that’s true no matter your political affiliation.

This review was originally filed from the Toronto Film Festival on September 7th. 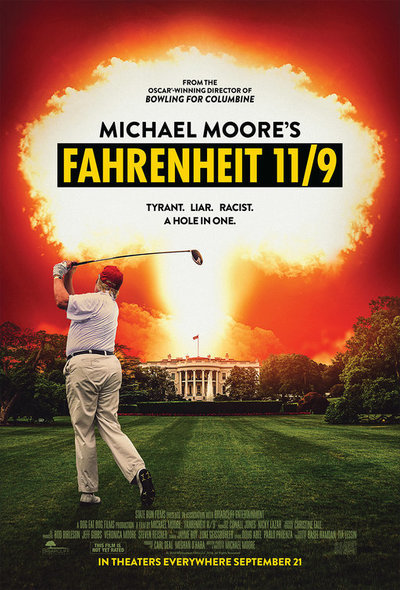 Rated R for language and some disturbing material/images.