Drunk walks into a bar...

An egg plops into a sweaty glass of beer, gripped by a gnarled, papery hand with chipped fingernails. In the background, a man sits immobile in faded light, lost in a pale fog. Perched next to the old guy at the bar is Henry Chinaski (Matt Dillon), who's just lost -- or quit -- another job, though it hasn't been made official yet. The stewed codger says to him: "I've probably slept longer than you've lived."

Probably. But, soaked in spirits, most of that sleep isn't likely to have given him much rest. Henry -- the alter ego of German-American writer/drinker/poet Charles Bukowski -- is still in his 30s, is only partly pickled, an alcoholic on training wheels. His constitution hasn't yet adapted to process the amount of liquor he consumes. So, he still pukes when he wakes up in the morning (or the afternoon) of the night before. He stumbles out of bed to the toilet, vomits and opens a beer. His girlfriend follows. She staggers, vomits, and lights a cigarette. Rise and shine.

"Factotum," directed by Bent Hamer, is a picaresque Bukowski primer, adapted by Hamer and Jim Stark from the title novel and a handful of stories about the poetically debauched author's primary subjects: drinking, writing, women and gambling. But mostly drinking. On his journey to cult fame, he takes (very, very briefly) a series of jobs that help him get from one drink to the next: iceman, taxi driver, brakeshoe stockboy, pickle sorter, whatever it takes between stints on unemployment. Jobs, people, paydays -- they all float in and out of Henry's life without much consequence. My dictionary says the title word means "an employee ... who serves in a wide range of capacities," and that sounds about right.

This movie may think it's about a man who boozes and works fitfully while pursuing his muse as a writer, but that's not the way it plays. "Factotum" is about a man who rarely works and occasionally writes, but only as fleeting distractions from his boozing. Trying to pick up his paycheck for his less-than-one-day stint as a lobby statue duster, Henry explains: "All I want to do is get my check and get drunk. Now, that may not sound noble, but it's my choice." Such is his credo for survival in the land of well scotch and the home of the minimum wage.

Dillon is a fine actor (at his best in the even dopier "Drugstore Cowboy"), but he doesn't seem quite slovenly or bloated or stinky or dissipated enough for this role. He's not romantic or bitter or disillusioned, just kind of wan and inert. His performance kept reminding me of somebody. Maybe it was Bukowski, or the other Henry Chinaski (Mickey Rourke in Barbet Schroeder's floridly Bukowskian "Barfly"). But I'm afraid it seemed more like a series of impressions -- of Christian Slater, or Bruce Springsteen, or Marlon Brando -- or all of them at once, mixed up like a slightly sweet cocktail made with cheap liquor.

The standout performances are from the women Henry gets to take him home -- Jan (Lili Taylor) and Laura (Marisa Tomei). Both are needy, but also know exactly what they want from Henry. And he pretty much lets them have it.

"Barfly" made evocative use of the tawdry old drinking joints in the no man's land along 3rd and 6th streets between downtown Los Angeles and La Cienega Blvd. You could smell the rot (and the rot gut) in the air, the aroma of hung-over days and dissolute nights. Because "Factotum" takes place in Minnesota (shot in and around Minneapolis-St. Paul), it seems so much cleaner, tamer, nicer than the 100-proof hard stuff.

Bukowski is one of those writers who can seem perversely, solipsistically romantic and glamorous, in a seedy-underbelly kind of way that's particularly attractive to surly teenagers and alienated college students who are aching to get some grit under their nails. He can even sound like a beery motivational speaker (or a Nike ad): "If you're going to try, go all the way. There is no other feeling like that. You will be alone with the gods. And the nights will flame with fire. You will ride life straight to perfect laughter. It's the only good fight there is."

But it's easy (and may even be necessary) to outgrow Bukowski's self-mythologizing lowlife pose/prose, just as it is to move beyond Judy Blume or Tom Robbins. How many people still read Bukowski in their 30s, 40s and beyond? I sometimes imagine him as a case of arrested development -- as if the Tom Waits of the '70s, who made boozy atmospheric records like 'Closing Time,' 'Nighthawks at the Diner,' and 'Small Change' had never developed the richer, more mature and poetic music of 'Rain Dogs,' 'Alice' and 'Blood Money.'

Almost 20 years after "Barfly," "Factotum" mostly feels... unnecessary. It doesn't have anything to reveal about Bukowski's art or his life -- nothing like David Cronenberg's illuminating and imaginative vision for fusing William S. Burroughs' biography with his fiction in "Naked Lunch." "Factotum" is just slumming. 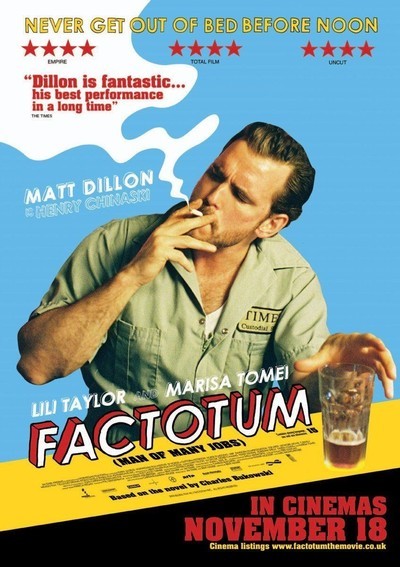