"I think I wanna be the kind of role model that brings people back to the time before the fruit of knowledge was eaten," the nouveau-burlesque artist Julie Atlas Muz says at the very beginning of "Exposed," a documentary that manages to be jaw-droppingly provocative and genuinely endearing—sometimes at alternating points, and by the end kind of all at once. "Exposed" portrays a number of artists, mostly New York based, working in burlesque, or rather a largely nouveau form of it. A form of performance art that takes a bunch of the ingredients and accoutrements of conventional burlesque and pushes them much farther than you'd imagine. And the movie also constitutes something of a "wanna bet?" challenge to a viewer who believes he or she can imagine plenty.

Directed by Beth B, who made a name for herself as a post-punk NYC DIY filmmaker in the early '80s, "Exposed' begins as a kind of conventional talking head doc that eventually reveals the remarkable layers of its subjects while never really breaking out of its standard firm, which eventually serves as a potential anchoring device for the viewer. Seeing a tight close-up of Mat Fraser, who has the rough-hewn handsomeness of a young Martin Amis type and a slightly plumy British accent to match, creates one impression; when footage of his stage show reveals his tiny arms and flipper-like hands, there's a bit of a shock, and it's entirely deliberate I think. Initially Beth B. shows us the "normal;" she then reveals the difference; and then she spends the rest of the movie unifying the two, provided the viewer is willing to go along for the ride.

Fraser's situation is the one that has the most immediate visual impact, but all of the performers here are taking burlesque and ultra-X-rated vaudeville as a vehicle to explore their own issues and concerns about gender and identity. World Famous BOB and Rose Wood, for instance, are biologically female and male respectively, but the representations they create on stage, and how these relate to their interactions in the "real" world, both past and present, are both complex and poignant. One of the subjects of the movie defines burlesque as an "immediate, honest, and sometimes brutal art form," and the shock tactics these performers incorporate into a context that had heretofore been defined as completely frivolous is not just a matter of spicing up "entertainment" but also pursuing self-realization. An upscale drinking spot like The Glass Slipper becomes a conduit for activism when transformed by these performers.

This all sounds pretty heavy, and no kidding, it is, but there's a great deal of humor here. The movie is as fascinating as it is concise—its running time is only about 80 minutes—and it is probably best experienced as part of a larger event at which its subjects actually perform, which is how the movie's being marketed in part. Still. It ought to be said, much of what is depicted here is not for the easily shaken. If you associate "burlesque" exclusively with Natalie Wood's striptease scene in "Gypsy," take a step back.

Throughout "Exposed," you'll see a few people seeming to pull items out of places you wouldn't think to pull from. Genitalia is displayed, then tugged, pulled, smushed, smeared with lipstick, and much, much more. Imagine the notorious windshield-sex scene from "The Counselor," only shot from inside the car. Okay, matters do not get entirely that graphic, but pretty close. You have been warned. If you think you're up for it, then go for it; "Exposed" will take you to a realm you might not have known even existed. 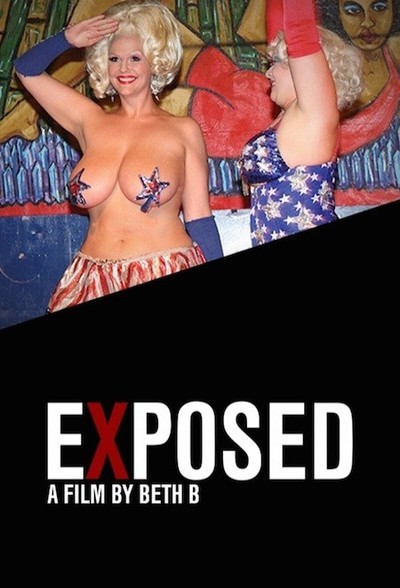 Julie Atlas Muz as Herself

Bunny Love as Herself

Dirty Martini as Herself