Everything Everywhere All At Once

Few things in life are certain besides death, taxes, and maybe the never-ending task that is doing laundry. At least that’s where the characters in writer/directors Daniel Kwan and Daniel Scheinert, collectively known as Daniels, new film “Everything Everywhere All at Once” find themselves initially. That is, until they take an emotional, philosophical, and deeply weird trip through the looking glass into the multiverse and discover metaphysical wisdom along the way.

In this love letter to genre cinema, Michelle Yeoh gives a virtuoso performance as Evelyn Wang, a weary owner of a laundromat under IRS audit. We first meet her enjoying a happy moment with her husband Waymond (Ke Huy Quan) and their daughter Joy (Stephanie Hsu). We see their smiling faces reflected in a mirror on their living room wall. As the camera literally zooms through the mirror, Evelyn’s smile fades, now seated at a table awash with business receipts. She’s preparing for a meeting with an auditor while simultaneously trying to cook food for a Chinese New Year party that will live up to the high standards of her visiting father Gong Gong (James Hong, wiley as ever).

On top of juggling her father’s visit and the tax audit, Evelyn’s sullen daughter Joy wants to bring her girlfriend Becky (Tallie Medel) to the party and her husband wants to talk about the state of their marriage. Just as Evelyn begins to feel overwhelmed by everything happening in her life she’s visited by another version of Waymond from what he calls the Alpha verse. Here humans have learned to “verse jump” and are threatened by an omniverse agent of chaos known as Jobu Tupaki. Soon, Evelyn is thrust into a universe-hopping adventure that has her questioning everything she thought she knew about her life, her failures, and her love for her family.

Most of the action is set in an IRS office building in Simi Valley (which, as a Californian, had me in stitches), where Evelyn must battle IRS agent Diedre (Jamie Lee Curtis, having the time of her life), a troop of security guards, and possibly everyone else she’s ever met. Production designer Jason Kisvarday crafts a seemingly endless cubicle-filled office where everything from the blade of a paper trimmer to a butt plug shaped auditor of the year awards become fair game in a battle to save the universe.

Editor Paul Rogers' breakneck pace matches the script’s frenetic dialogue, with layers of universes simultaneously folding into each other while also propelling Evelyn’s internal journey. Match cuts seamlessly connect the universes together, while playful cuts help emphasize the humor at the heart of the film.

Born from choices both made and not made, each universe has a distinct look and feel, with winking film references ranging from “The Matrix” to “The Fall” to “2001: A Space Odyssey” to “In The Mood For Love” to “Ratatouille.” Even Michelle Yeoh’s own legacy finds its way into the film with loving callbacks to her Hong Kong action film days and the wuxia classic “Crouching Tiger, Hidden Dragon.” The fight sequences, choreographed by Andy and Brian Le, have a balletic beauty to them, wisely shot by cinematographer Larkin Seiple in wide shots allowing whole bodies to fill the frame.

Yeoh is the anchor of the film, given a role that showcases her wide range of talents, from her fine martial art skills to her superb comic timing to her ability to excavate endless depths of rich human emotion often just from a glance or a reaction. She is a movie star and this is a movie that knows it. Watching her shine so bright and clearly having a ball brought tears to my eyes more than once.

Just as Evelyn taps into Yeoh’s iconography, facets of Waymond can be found throughout Quan’s unique career. The comic timing from his childhood roles as Data in “The Goonies” and Short Round in “Indiana Jones and the Temple of Doom” echoes in Evelyn’s nebbish husband. His work as a fight coordinator shows through in Alpha’s slick action hero capable of using a fanny pack to take out a group of attackers. Even his time as an assistant director to Wong Kar Wai on “2046” can be found in the universe where he plays the debonair one who got away. Quan tackles these variations with aplomb, bringing pathos to each and serving as a gentle reminder that there's strength in kindness.

As Evelyn and Waymond’s relationship ebbs and flows in iterations through the multiverses, it’s their daughter Joy who proves to be the lynchpin. In a true breakout performance from Stephanie Hsu, Joy represents a growing generational divide. Joy carries the weight of Evelyn’s fractured relationship with her grandfather and the disappointments of an American dream unattained. Her queerness as foreign to her mother as the country was when she herself first arrived. Her aimlessness a greater disappointment because of all that Eveyln sacrificed for her to have more options in life than she did. This pressure manifests in a rebellion so great it stretches beyond the multiverses into a realm where a giant everything bagel looms like a black hole ready to suck everyone into the void.

If the void arises from the compounding of generational trauma, the Daniels posit that it can be reversed through the unconditional love passed down through those same generations, if we choose compassion and understanding over judgment and rejection. Chaos reigns and life may only ever make sense in fleeting moments, but it’s those moments we should cherish. Moments of love and camaraderie. Sometimes they happen over time. Sometimes they happen all at once.

This review was filed from the premiere at the SXSW Film Festival. The film opens on March 25th. 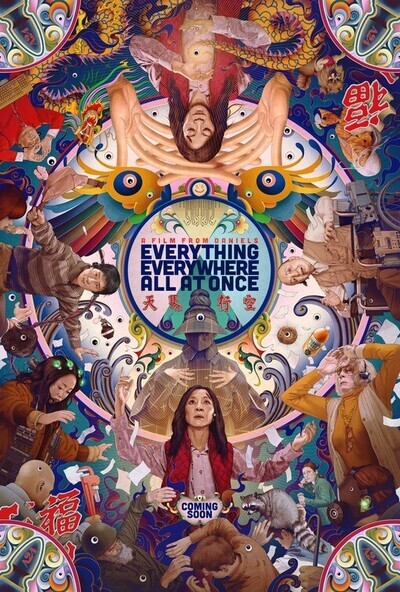 Everything Everywhere All at Once (2022)

Rated R for some violence, sexual material and language.