Director Chloé Zhao applies her distinctive aesthetic imprint to “Eternals,” but she can only do so much to bend the Marvel Cinematic Universe to her will. The result is a blockbuster of unusual gentle beauty that also strains to fulfill the gargantuan requirements of a massive action spectacle.

It is, in short, a bit of a mess. It is also—and I cannot stress this enough—2 hours and 37 minutes long. And yet because the talented, eclectic cast is so enormous and so much world-building must occur, “Eternals” ultimately feels rushed and unsatisfying. The mythology here is both dense and frequently silly, with the movie grinding to a halt around the one-hour mark for an extensive information dump. By the end, you may still be unclear as to what’s going on, but you also may not care.

Zhao, the newly minted Academy Award winner for Best Picture and Director for the spare and intimate “Nomadland,” does offer a great deal of her signature style, though. For those of you who found the choice of Zhao a fascinating one and wondered what her version of the MCU might look like, you’ll be happy to learn she manages to find magic hour wherever she goes, from a breezy sunset on the shores of ancient Babylon to ominous storm clouds gathering on the plains of present-day South Dakota. Working with cinematographer Ben Davis, who also shot “Guardians of the Galaxy,” “Doctor Strange,” and “Captain Marvel,” she consistently provides opportunities to let us slow down, take a breath, and enjoy a moment of naturalism and stillness. You can feel the sunbaked heat of the windy Australian outback. An action scene set in a torch-lit forest at night is especially stunning.

Unfortunately, they don’t last long. Because there is a big, noisy comic book beast to feed.

Zhao and her fellow screenwriters Patrick Burleigh and Ryan Firpo & Kaz Firpo lurch around in time in an ungainly fashion to tell the story of a group of immortal beings living secretly on Earth. Each has his or her own specific abilities but, collectively, they share the quippy humor that’s become so typical in Marvel movies. The casting and characteristics on display here are revolutionary and, at first, cause for inspiration that we might be in for something totally different. There’s a natural diversity at work in ways we haven’t seen from the Avengers, for example. From the leadership of Salma Hayek’s Ajak and Gemma Chan’s Sersi to Brian Tyree Henry and Haaz Sleiman as a gay couple with a young son to Lauren Ridloff’s Makkari, whose hearing impairment is her superpower—the inclusive nature of “Eternals” feels both exciting and effortless. Angelina Jolie’s Thena is a ferocious warrior who also suffers from mental illness, which the film handles sensitively. Conversely, Lia McHugh livens things up as the androgynous, forever-young Sprite.

Perhaps most striking of all, two characters have actual sex, which is unprecedented and long overdue in a cinematic world where everyone is super-hot and muscular and dressed in form-fitting costumes. The scene is brief, but it accomplishes so much to indicate a deeper and more vulnerable sense of humanity in these comic book figures. Tony Stark and Pepper Potts probably did it. Clint Barton definitely did because he had kids. But most other romantic relationships have featured benign flirting at most, so to see these characters behaving like grown people in this manner is yet another example of the potential lurking within “Eternals.”

There is also a plot, however, which will escape your mind as quickly as it entered. Briefly, the Eternals have scattered across the globe in the centuries since they arrived on Earth in a spaceship that resembles a behemoth, black marble Dorito. All along, they’ve been stealthily guiding humanity and fighting ravenous, sinewy monsters known as Deviants. But a potentially cataclysmic event forces them to leave the comfortable lives they’ve forged for themselves, reassemble (if you’ll forgive the word choice) and use their combined superpowers to stop what is essentially the apocalypse. Again! You don’t need to be deeply steeped in Marvel lore in general or Jack Kirby’s trippy comic series specifically to follow “Eternals”; aside from a brief reference to Thanos, and why these heroes didn’t step in to stop the events of “Avengers: Infinity War,” this feels more like a standalone film than most in the MCU. Having said that, of course you’ll get more out of the movie if you’re a fan, and the obligatory end-credit sequences will mean more to you, too.

Chan’s Sersi, with her transmutational abilities, and Richard Madden’s Ikaris, a versatile, Superman-type figure prominently as centuries-old, on-and-off-again lovers. Charismatic as Madden is, though, Chan enjoys greater sparks with Kit Harington as her mortal, London-based boyfriend, Dane Whitman, who shares Sersi’s interest in archaeology. Whatever emotional stakes may exist between any of these characters eventually take a back seat to flying around and zapping monsters with eye lasers. You can feel the struggle in trying to juggle it all. And the climactic action extravaganza is so glossy and cacophonous, it could have been plucked out of any number of soulless, sci-fi spectacles over the past decade, smothering all the smaller charms we’d enjoyed along the way.

A newly buff Kumail Nanjiani offers some laughs as a pompous Bollywood star, Don Lee provides a kind presence despite his hulking power, and Barry Keoghan merely has to show up to make us feel his unnerving vibe. All of these actors prove they’re up for the challenge of trying to establish complicated characters within the frenzy of the MCU machinery. Frustratingly, they—and Zhao—can only serve as cogs.

Only in theaters on November 5th. 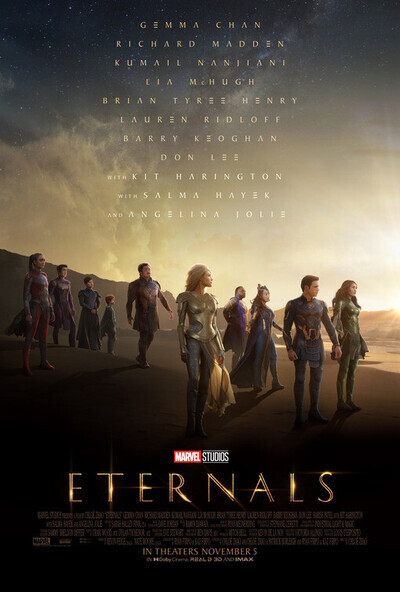 Rated PG-13 for fantasy violence and action, some language and brief sexuality.