A giddy chase scene almost singlehandedly rescues “Escape from Mogadishu,” an otherwise unmoving South Korean political thriller about the real-life Korean diplomats who fled Somalia during that country’s 1991 civil war. You might wonder how one set piece can save an entire film, but that’s exactly the sort of miracle that action fans have come to expect from writer/director Seung-wan Ryoo (“Crying Fist,” “The City of Violence”), especially now that “Escape from Mogadishu” has become the next big thing in Ryoo’s native South Korea.

The rest of “Escape from Mogadishu” isn’t as compelling. In Ryoo’s hidebound drama, selfless South Koreans are canonized as modern saints because they not only adapted and endured during wartime, but also set a good example for future diplomatic relations. Surviving violence may be ennobling, but turning the other cheek, without any hope of future recognition, is divine. That line of thought might have been more compelling if “Escape from Mogadishu” didn’t flatten its based-on-a-true-story plot into a brittle team-building exercise. Ryoo’s latest steamrolls over any such nuance, both on a narrative and formal level, and instead panders to sentimentality and cynicism by vaguely lamenting war as a gauntlet that only the strong can survive.

"Escape from Mogadishu" begins with a text crawl that explains why South Korean diplomats were sent to Somalia in 1987: to earn support from African members of the United Nations, since “the African continent held the most votes in the UN.” After that, some establishing scenes (set in 1990) featuring South Korean diplomats Shin-sung Han (Yoon-seok Kim) and Dae-jin Kang (In-sung Zo) neatly establish the area’s political instability. First, the South Koreans, after being waylaid by local mercenaries (hired by the North Koreans), miss their long-anticipated appointment with Somalian President Barre. Then, after some brief words with the North Korean delegation, led by Yong-su Rim (Joon-ho Huh) and Joon-ki Tae (Kyo-hwan Koo), the South Koreans are asked to give bribes—"You want a $50,000 scholarship for your sons?"—and then threatened at gunpoint (in their own embassy) by local authorities.

Fast-forward to Mogadishu in 1991, somehow. The rebels—whom the North Koreans are also arming with guns—are now shooting up the streets indiscriminately. Diplomatic protection means nothing, and resources are scarce. The South Korean’s self-serving mission is contrasted with bloody rioting just outside their embassy’s doors. Ryoo’s typically engaged camera (the movie was shot by his regular cinematographer Young-hwan Choi) covers the scene, and highlights the blood trailing from one Somalian’s head wound as he’s dragged by his ankles through the street. At the same time, a pre-recorded version of the Koreans’ diplomatic message plays for cheap irony: "Remember that in good times or bad, we South Koreans will always be by your side!"

From here, the South Koreans decide that they should (rather than must) extend an olive branch to the North Koreans, an ennobling, but mysterious gesture that motivates their mad dash for the Italian embassy’s chopper. Ryoo somehow always makes time to present his fellow South Koreans in a flattering light, as when the diplomats recommend a home remedy for Somalian driver Swama (Andrew Naganga Kimani) and the injuries he sustains while on the job. Swama still dies in the street with a single tear rolling down his bloody face; death, like the threat of impending violence, ostensibly makes the South Korean’s actions seem that much more heroic. For example: Kang, who we are told is a hothead “with a chip on his shoulder,” dares an armed Somalian officer (Peter Kawa) to shoot him in the face while Kang leans on a car horn to grab the attention of some nearby Somalian diplomats. Ryoo overstresses the scene’s you-are-there tension: would you be so brave as to face death in the face, and yell right back?

Thankfully, “Escape from Mogadishu” is urgent enough, albeit in a very different way, during the aforementioned chase. In this scene, Ryoo’s camera launches over, under, and through a hail of gunfire as Somalian rebels shoot up and race after a car-load of Korean diplomats. It’s a thrilling sequence, shot with a real eye for the sort of boy’s adventure details that makes Ryoo’s Spielberg-and-video-games-inspired set pieces so thrilling to watch.

There’s also always a sense of proportion and coherence to what you’re looking at in this chase, and each new plot development adds to the tension. It almost doesn’t even matter that this scene is as shallow and sketchy as the rest of the movie: it’s bold and overwhelming enough to give you a powerful contact high. One chase scene may not sound like much, but it could be worth the price of admission. 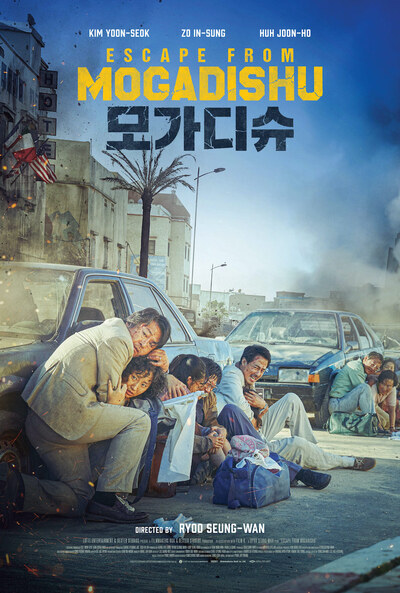