Wong-Kar Wai's film, named "The Hand," stars Gong Li as Miss Hua, a prostitute who is at the top of her game the first time the shy tailor Zhang (Chang Chen) meets her. He has been sent by his boss to design her clothes, and as he waits in her living room, he clearly hears the sounds of sex on the other side of the wall. Her client leaves, she summons him, and curtly interrogates him. He passes muster. To be sure he will think about her while designing her clothes, she says, she will supply him with an aid to his memory. This she does; the film's title is a clue.

Steven Soderbergh's film, "Equilibrium," is a sketch starring Robert Downey Jr. as the neurotic client of Dr. Pearl (Alan Arkin), his psychiatrist. Downey goes through verbal riffs as only Downey can do, moping about a recurring dream. Because the doctor is not in his line of sight, he is unaware that Dr. Pearl, between cursory responses, has seen someone through the window and is eagerly trying to mime the suggestion that they meet later.

Michelangelo Antonioni's film, "The Dangerous Thread of Things," takes place near a resort on a lake, out of season. A man named Christopher (Christopher Buchholz) and his wife Cloe (Regina Nemni) stroll and talk and discuss their problems, and then he sees a sexy young woman (Luisa Ranieri), and his wife tells him where she lives.

He goes to visit her, in improbable quarters inside a crumbling medieval tower, and they have sex. She laughs a lot. After he leaves, she does the kind of dance on the beach that hippies used to perform at dawn in Lincoln Park back when the world was young and dance standards were more relaxed.

The Wong Kar-Wai film is erotic. At least I found it so, and in matters of eroticism, one is always the only judge who matters. The film has no nudity, no explicit sex, no lingering shots of Gong Li's beauty. It is about situation and personality. She sees him, understands him, creates his obsession with her almost casually. Later, when he comes to measure her again, he uses his hands instead of a tape measure. She allows him. There is an extraordinary scene in his tailor shop where his hands and arms venture inside her dress as if she were wearing it. Time passes. There is a sad and poetic closure.

The Soderbergh film makes the point that few things are more boring than what arouses someone else -- unless it also arouses you, of course, in which case you can forget the other person and just get on with it. Downey's dream is all he can think of, but the psychiatrist cannot force himself to listen. Neither can we; it's much more exciting to speculate on the (unseen) object of his hoped-for tryst.

I return to Wong Kar-Wai's "The Hand." It stays with me. The characters expand in my memory and imagination. I feel empathy for both of them: Miss Hua, sadly accepting the fading of her beauty, the disappearance of her clients, the loss of her health, and Mr. Zhang, who will always be in her thrall. "I became a tailor because of you," he says. It is the greatest compliment it is within his power to give, and she knows it. Knows it, and is touched by it as none of the countless words of her countless clients have ever, could ever, touch her. 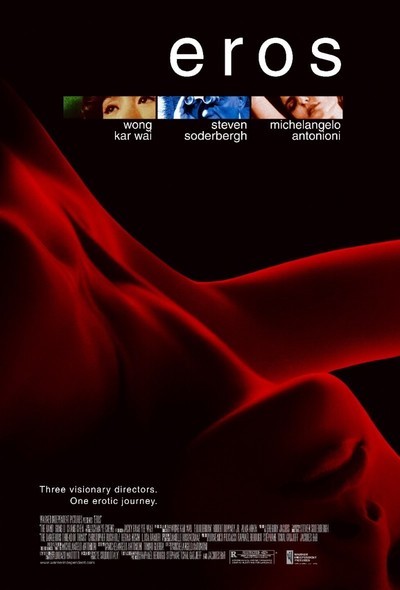 Ele Keats as The Woman / Cecelia