It helps to have a short attention span while watching “Eraser,” the new Arnold Schwarzenegger picture. Consider, for example, a sequence late in the film, where Arnold is shot through the left shoulder. He grabs his shoulder and grimaces. From the bullet's point of entry, we guess his shoulder bone is broken and there is a lot of muscle damage. Immediately afterward, Arnold is in a fight to the death with the villain (James Caan) on top of a shipping container that has been lifted high in the air by a crane. The heroine (Vanessa Williams) is also on the container, and she falls off. But Arnold is able to grab her out of the air. He holds her with his right hand, and supports the weight of both of them with his left hand and arm. That's a neat trick after a bullet has shattered your shoulder. But wait. If you think way back to the movie's second big action sequence, near the beginning of the film, Arnold and Vanessa are the targets of a nail bomb, which explodes, driving a spike completely through Arnold's right hand--the one he later holds Williams with. A guy like that, he could play basketball on bad ankles for weeks. How does he do it? I guess he has plumb forgotten the spike through his hand. There have been a lot of distractions, like being attacked by alligators at the New York City Zoo, and falling out of an airplane without his parachute, and shooting at a Boeing 727 with a handgun. Arnold is amazingly serene under this duress. After he shoots the alligator through the head, he tells it, “You’re luggage!” The plot of “Eraser” involves Vanessa Williams as Lee Cullen, an employee of a defense contractor who stumbles across evidence that a secret cabal inside the U.S. government is illegally exporting advanced weapons systems. In particular, they're selling the Rail Gun. What is a Rail Gun? Allow the movie's director, Charles Russell, to explain: “Rail guns are hyper-velocity weapons that shoot aluminum or clay rounds at just below the speed of light.” Uh huh. Just below the speed of light? Which is 186,282 miles a second? What happens to aluminum and clay rounds shot at that speed? They don’t pulverize or anything, do they? That muzzle velocity doesn't cause overheating or anything, I suppose? At least there's no recoil when the bullets leave the guns at just below the speed of light. I know that because at one point Arnold holds a Rail Gun in each hand (including the injured right one) and fires them simultaneously. What is amazing is that Charles Russell wants us to believe these guns are plausible. “These guns,” he elaborates in the press notes, “represent a whole new technology in weaponry that is still in its infancy, though a large-scale version exists in limited numbers on battleships and tanks.

They have incredible range. They can pierce three-foot-thick cement walls and then knock a canary off a tin can with absolute accuracy.” If I read this correctly, he is talking here about the battleship model.

My curiosity is awakened. To hell with the secret government plot--I want to seethe U.S. Navy shooting clay bullets at just beneath the speed of light through three-foot cement walls at canaries. And I want to stay for the credits: “No canaries were harmed during the filming of this motion picture.” But I digress. “Eraser” is actually good action fun, with spectacular stunts and special effects (I liked the sequence where Arnold shoots it out with the Boeing 727) and high energy. Arnold plays his usual heroic character, an ace operative in the federal Witness Protection Program, and Vanessa Williams is a good sport, running and jumping and fighting and shooting and kicking and screaming and being tied to chairs and smuggling computer discs and looking great. There is fun, too, when Arnold contacts an old friend named Johnny C (Robert Pastorelli) from the Witness Protection Program. Johnny is an ex-Mafia guy, now working in a drag bar. When Arnold finds out the illegal arms are being shipped from docks controlled by the union, Johnny goes to his uncle, Tony Two Toes, who looks unkindly on anybody moving anything through the docks without union sanction. Soon Johnny, Tony Two Toes and other Mafioso are spying on a Russian ship that's being loaded. They have the following conversation: Tony Two Toes: Those dirty commies! Underling: They're not commies any more. They're a federation of independent liberated states. Tony: Don't make me hurt you, Mikey. “Eraser” is more or less what you expect, two hours of mindless nonstop high-tech action, with preposterous situations, a body count in the dozens, and Arnold introducing a new trademark line of dialogue (it's supposed to be “Trust me,” but I think “You're luggage” will win on points). Thinking back over the film, I can only praise the director's restraint in leaving out the canary. 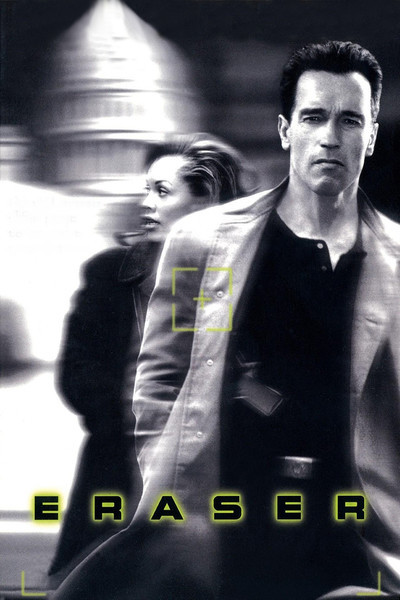 Rated R For Violent Action Throughout and Some Language