Jason James’ “Entanglement” opens with a great metaphysical joke. Ben (Thomas Middleditch) is the sort of depressive sad sack so inept at life that he cannot even succeed at ending his own. After a series of botched suicide attempts, he regards the major events of his thirty-some years as illustrated by a self-made collage on his apartment wall, comprised of yarn and handwritten memories. When his smitten neighbor, Tabby (Diana Bang), questions the collage’s purpose, Ben explains that if he could pinpoint the choice he made in life that led him astray, then he could work to correct the past, starting his life on a new and enlightened path. The books Ben professes to have read about alternative realities spawned from mankind’s actions might as well have been coauthored by Mark Frost and David Lynch, whose latest season of “Twin Peaks” found its protagonist, Agent Cooper, attempting to rewrite history. Yet just as Cooper discovers that some scars ultimately cannot be healed, Ben realizes that he can’t erase his own choices from the wall, considering he wrote them in permanent marker. Clearly obvious details aren’t prone to catching Ben’s gaze.

This observation proves to be a sizable understatement throughout “Entanglement,” in which clues arise not as breadcrumbs but entire pre-sliced loaves. Reviewing such a picture without delving into spoiler territory would be a fruitless endeavor, since the film’s defining strengths and weaknesses are dictated entirely by its twists. Perhaps the script by Jason Filiatrault would’ve benefited from an injection of Lynchian surrealism, opting for abstract grandeur rather than boilerplate psychoanalysis. “Entanglement” is gleefully weird at times, but it could’ve been a whole lot weirder. It’s not long before the movie slips into a certain cinematic language that will be instantly familiar to anyone who’s seen “Fight Club” and “The Usual Suspects.” Kevin Spacey’s iconic scene in “Suspects,” which is much creepier in hindsight, is replicated by a character here, except instead of ending on a “poof” sound effect, we get a finger snap. The “Fight Club” parallels are less obvious at the outset, until the characters come across deer in the woods that are so poorly animated, they’d feel right at home in “Birdemic.” These pseudo spirit animals signal all of the predictable revelations that will follow, yet I’d be lying if I said that I didn’t enjoy the ride, even if it all amounts to an exercise in mental masturbation.

Key to the film’s appeal is Jess Weixler, an actress I’ve loved ever since her breakout role in Mitchell Lichtenstein’s 2007 black comedy treasure, “Teeth.” It was the unsettling intentions reverberating beneath the elation on her face that made her so magnetic, particularly in the film's unforgettable final moments. As soon as she turns up in “Entanglement,” as Hanna, a free spirit who becomes attracted to Middleditch’s scruffy mope at first glance, our suspicions are instantly heightened. The bouquet of red flags that accompany her every step—she steals Ben’s wallet, breaks into his apartment and is the first to acknowledge those obscenely cartoonish deer—are secondary to her air of mischief bordering on madness. Ben pursues her initially because he believes she’s the sister he almost had, if only the adoption hadn’t been invalidated by his mother’s sudden pregnancy. In light of his losing track record with women, Ben believes that connecting with his would-be sister will help improve his love life (think Albert Brooks’ “Mother,” if Brooks had seen Debbie Reynolds as a romantic prospect). Of course, Ben and Hanna quickly fall for one another, and it’s here where the film could’ve gone one of three directions. Read no further if you prefer to have this secret preserved.

Either Hanna is a preposterously compatible partner molded from male fantasies, a relentless stalker with unspoken motives or an actual male fantasy. Had James and Filiatrault gone with the second option, it may have made for a more challenging third act, while also giving Weixler more to sink her formidable teeth into. Alas, the film isn’t really about Hanna at all, since she literally wouldn’t exist without Ben. Hints are planted for this final act reveal from the get-go, when Ben has his first session with a child psychologist who fails to find his jokes amusing. “The puppet thinks I’m hilarious,” insists Ben, referring to the gape-mouthed doll atop the psychologist’s desk. Hanna is nothing more than Ben’s own mental puppet, an idealized female companion who sees past all of his shortcomings while speaking in a deadpan language not unlike his own (she describes Judy Blume books as “crack for people with vaginas”).

This twist lends a richer layer of melancholy to their scenes together, which occasionally tap into deeper truths about the inner dialogue writers have with themselves while creating characters that are an extension of their own experience. Having already cornered the market on endearingly wounded masculinity with his lead role on HBO’s “Silicon Valley,” Middleditch has several moments here that are genuinely touching, particularly when he reflects on the difficulty he’s had in ceasing to love his ex as he did when they were together. The most pleasurable giveaways regarding Hanna’s Tyler Durden-esque nonexistence are the subtlest ones, such as when she asks a waitress for coffee. James cuts to a wide shot, and we see the waitress’ head turn to face Ben, who had just declined her offer for a coffee refill. It’s this type of sly detail that makes a second viewing all the more rewarding.

Yet is “Entanglement” worth a second viewing, let alone a first? I certainly was eager to see how this yarn would unspool, and though it didn’t surprise me, it did often make me smile. That being said, I’m yearning to see a romantic comedy where the sad sack guy turns out to be a figment of his overly accommodating girlfriend’s imagination, thus causing her to reevaluate her preoccupation with fixing other people’s lives while neglecting her own. At its best, this film pokes fun at these gendered tropes in a way reminiscent of much better pictures, such as Spike Jonze’s “Her” or Jonathan Dayton and Valerie Faris’ “Ruby Sparks.” In one of many fantasy sequences, Ben is questioned by his mirrored reflection on how he managed to avoid all the obvious signs that his relationship with Hanna was a complete phony. “I dunno,” Ben replies, “I thought it was whimsical.” An excellent response, though it would’ve had more impact if the scenes supposedly set in reality weren’t marred by an overdose of whimsy themselves.

It’s frankly difficult to determine why Ben would want to attempt suicide, since solutions to his woes are knocking at his door with such persistence, you’d think he was starring in “The Truman Show.” Plus various supporting characters speak in stilted sitcom rhythms as if playing to a studio audience (Ben is comedically informed by a doctor that his father “will be fine…probably”). Ringing most false is the expedient happy ending that romantically unites Ben with Tabby, whose existence I have serious doubts about as well. Battling symptoms that suggest schizophrenia, Ben has a whole lot more healing to do before even contemplating romance. Yet for moviegoers who don’t mind shutting down their rational brains in order to enjoy 85 minutes of likable escapism, “Entanglement” will be just the ticket. Probably. 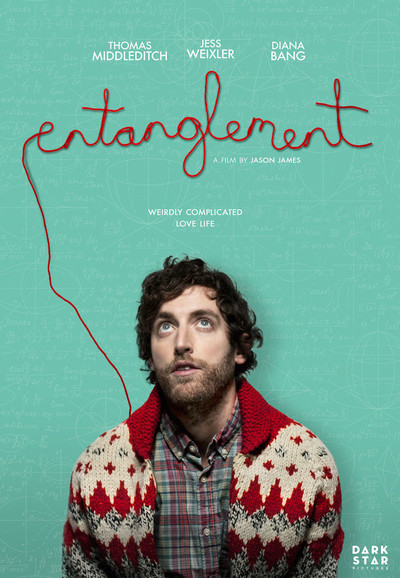