"Teeth" sinks its incisors into a cross-cultural myth known as vagina dentata. Or, as Juno might call it, "Vaggie D." Depending on who you ask (not that you should bring it up in polite intercourse), it is said to represent the male fear of castration and of feminine sexuality in general. It also symbolizes the woman's anxieties about penetration, and/or her desire to devour her mate, who is attempting to fulfill his own bio-mythological destiny by returning upstream to spawn in the womb from whence he originated. (Or, as the movie puts it, "the dark crucible that hatched him.")

Whether you view it as a primordial image from the collective unconscious or a practical warning against promiscuity, vagina dentata makes an indubitably memorable impression -- and an ideal premise for a tongue-in-cheek thriller about uncontrollable urges.

Writer-director Mitchell Lichtenstein's teen horror-(of)-sex comedy begins with a big visual pun about a different portion of the feminine anatomy: An impressive pair of atomic power-plant silos protrude from the horizon like ... you know. The camera tilts down to the lawn of a suburban home where nuclear family fusion is about to occur. Bill (Lenny von Dohlen) and his son Brad (John Hensley) are about to join Kim (Vivienne Benesch) and her daughter Dawn (Jess Weixler) to form a single-household zygote. Mutations ensue.

Years later, Kim has developed cancer and teenage Dawn -- well, the title of the movie refers to a biological abnormality she has developed down there. The 1950s sci-fi premise would be that Dawn is the unfortunate victim of radioactivity, but there's something else in the air (and maybe the water) here. It's called sexuality, and it permeates her everyday life: from pop culture (parental-advisory lyrics, R and PG-13-rated movies) to anatomical textbook illustrations in health class to the hormones and pheromones that hang heavily in the atmosphere, like the fetid steam in a gymnasium locker room.

Everywhere she turns, Dawn the dental damsel-in-distress is surrounded by temptation. Yet she is committed to maintaining her purity. Believing that one's virginity is "the most precious gift of all," she encourages her fellow Promise Ring members to remain chaste until marriage. But nobody ever said it was going to be easy.

Like Sissy Spacek's Carrie, Dawn is going through that awkward adolescent stage. (Weixler plays it with a perfect blend of perky Reese Witherspoon cluelessness and wide-eyed Heather Graham innocence.) She's only just beginning to discover the new, and not fully manageable, powers of her own developing body, and at times she feels like an alien in her own skin.

She's always kind of known she had something ... unusual in the vicinity of her privates, something that confused and frightened her, but she tried not to think about it. There was that time with her stepbrother Brad in the inflatable pool when they were just kids, when he cut his finger while touching her under the water, but she repressed that memory a long time ago. Now Brad has (under-)developed into a tattooed monkey-boy who spends all of his time in his thrash-metal cave of a bedroom with his Rottweiler, a bong and some skinny girl who is not his girlfriend. None of them completely satisfies him. He wants what he knows he can't have: Dawn.

While "Carrie" is the obvious influence (with genital transmogrification instead of telekinesis, and the other sex doing the bulk of the bleeding), "Teeth" could be seen as a "Reefer Madness" for the New Chastity Generation. The camp sensibility, however, is fully self-aware, not unlike certain Todd Haynes' movies: the Barbie-doll biopic "Superstar: The Karen Carpenter Story," or the black-and-white venereal horror/sci-fi segment of "Poison." Writer-director Lichtenstein, best known for his central part in Robert Altman's 1983 film of David Rabe's "Streamers," straddles one line between earnestness and facetiousness and another between horror and satire, shifting and pivoting from one to the other. Most of the time his balance is just right.

The joke isn't so much that Dawn sports a gynecological snapper-trap, but that guys will stoop so low to take advantage of her. Because they're such unprincipled horndogs who won't take "no" for an answer, the movie suggests they deserve what they get. Still, when Dawn's first full-frontal victim looks down to find he's not even half the man he used to be, he seems genuinely hurt -- by the rejection as much as the castration. In a bloody, nightmarish, young-romantic way, it's kind of touching. 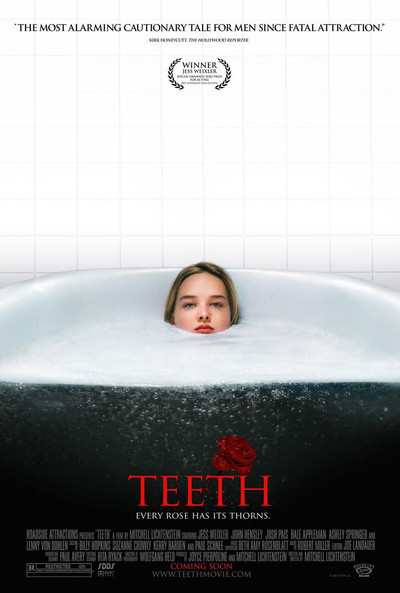 Rated R for disturbing sequences involving sexuality and violence, language and some drug use