Riz Ahmed kicks off his performance in this new film co-written and directed by Michael Pearce in high trauma mode. In a motel room in which the wallpaper seems to be sweating itself off, he kills gnarly looking bugs, conducts arcane research, sprays himself down with insect repellent. Who can blame him? A montage during the opening credits has shown us an alien invasion commandeered by mutated versions of our invertebrate buddies. Ahmed’s character, Malik, is one of the few left on earth uninfected by the now-parasitical creatures who are taking control of the human population.

It stands to reason, especially in movie terms, that Malik has to protect his family, right? But his family isn’t the unit he wants it to be. His two sons, Jay and Bobby, 10 and less-than-ten respectively, live on a farm with their mom Piya and her new partner Dylan. Jay and Bobby can’t stand Dylan. Jay in particular is captivated by his real dad’s letters, which refer to his secret missions as a world-saving soldier.

So when Malik comes into the boys’ bedroom in the wee small hours of the morning and proposes a race to see which of them can make it to Malik’s car first, they’re eager to participate. Malik is briefly relieved to have forcibly taken custody of his kids. The better to protect them from the alien threat.

But let’s hold on a moment. Even if Malik is doing the right thing, even if he’s truly a hero, his erratic behavior is so ticcy, so jumpy, so impulsive, so flecked with hatefulness, that it doesn’t just raise a red flag. The guy’s a whole damn color guard.

For a while Pearce does a very clever balancing act, taking everyday unpleasantries and grotesqueries of life and exaggerating them just so. Jay, who himself enjoys drawing sci-fi monsters, proves especially susceptible to Malik’s visions—even before Malik has fully articulated them to his older kid. As car issues and other troubles crop up, Malik grows more unraveled, and soon the forces of the law, who’ve taken on Malik’s kind parole officer as an adjunct, are pursuing the trio.

Ahmed’s performance has a lot of skill and conviction fueling it. And the rest of the cast is splendid. Lucian-River Chauhan and Aditya Geddada, who play Jay and Bobby, are way above-average child actors. Rory Cochrane is marvelously terse as a pessimistic fed, and Octavia Spencer has warmth to spare as Malik’s only friend.

But Pearce eventually overplays his hand. A sequence in which Malik knocks out a shotgun-toting ‘Murican who just happens to be a dead ringer for Steve Bannon is only the beginning of a bad patch. The MAGA man’s MAGA son gets out their automatic weapons and go a-huntin’, and the movie’s sociopolitical waters are roiled and muddied. And the film finally devolves into a species of hostage porn, with Ahmed’s character so stretched that he brings to mind the unfortunate adage about how just because you’re mentally ill it doesn’t mean you’re not being a you-know-what. And of course you know that your exasperation is being summoned for the sole purpose of forcing you to put that emotional toothpaste back in the tube. It’s dishonest, showy filmmaking.

Now playing in select theaters and available on Amazon Prime on December 10th. 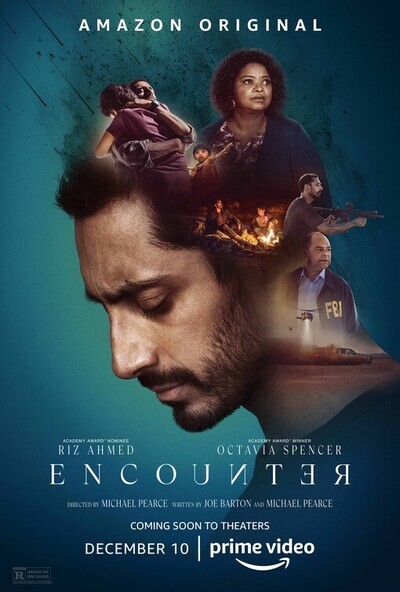