Embrace of the Serpent

"Embrace of the Serpent" is a drama about the effect of European colonialism on the Amazon. Shot along the border of Colombia and Brazil, it unfolds in two different historical periods, and features a script developed in consultation with native tribes. And yet it can't quite seem to get out of its own way. It is intelligent and sensitive and assembled with a great care, and worth watching just for its images of the jungle, which is often seen from the points-of-view of a canoe gliding across misty water, or a party of explorers moving through thickets of gnarled trees and shrubs.

But this film from Colombian writer-director Ciro Guerra seems averse to letting a mysterious image or poetic moment linger onscreen, and in the mind, without instantly using it as a springboard to talk about the conflict between whites and the natives they're exploiting (even when the whites are scientists who fancy themselves more enlightened than the typical industrialist or soldier). There is nothing hugely wrong with the movie, but also nothing amazing about it—aside from the mere fact of its existence, of course, which is nothing to sneeze at. Shooting a feature on location in the jungle is no joke, as Werner Herzog, a director whose spirit hovers over the production, learned when he shot such Film Director vs. Nature dramas as "Aguirre, the Wrath of God" and "Fitzcarraldo." The jungle waters are filled with snakes, some constricting and others poisonous, and the likelihood of contracting some horrible disease or perishing in an accident must've weighed on the crew's mind. Around each new river bend is a metaphor, a fact that Guerra understands and isn't shy about exploiting. The film's opening credits play out over shots of a immense anaconda giving birth to baby snakes, a sequence with heavy Biblical overtones that works equally well as an analogy for colonialism (one era's invasions of the Garden of Eden inevitably giving birth to another's) or for the resilience of the land and its people. But despite this image and many others like it, the movie never becomes particularly visionary, much less trippy. It's an earthbound, prosaic story that plays by most of the usual commercial storytelling rules.

The movie's two major white characters are loosely based on real individuals. One is the German ethnologist Theodor Koch-Grunberg, who in the early 20th century explored the Yapura River and the Rio Negro to the border with Venezuela. The other is the American psychedelic researcher and botanist Richard Evans Schultes, who studied Amazonian ethno-botany in the 1940s. The earlier researcher is named Theo here, and played by Jan Bijvoet of Borgman. He arrives in the story suffering from malaria and requiring homegrown medicine and a certain amount of nursing and hand-holding. The other character has been named Evan (Brionne Davis), an American who is searching for a plant called yakruna, which grows on rubber plants and improves their quality; he seems to be retracing Theo's route, and even has some of his journals in a knapsack.

The connective tissue between eras is the character of Karamakate, the last of the Cohiuano. The character is played as a young man by Nilbio Torres and as an older man by Antonio Bolivar. The filmmakers might as well have scored portions of the movie with The Who's "Won't Get Fooled Again," because that's the core struggle of Karamakate, who has good reason to believe that no good can come from helping white men, but relents when Evan shows up with his horn-rimmed glasses and gentle demeanor.

Guerra has a great ear for the self-justifying and delusional presentations of both Theo and Evan. He shows us how their politeness and curiosity—compared to that of other Europeans, anyway—keep even the most skeptical natives from rejecting them out-of-hand. (Karamakate's first words to Theo are "Go away," but he ends up spending the entire movie in his company.)

We also see how quickly detente can sour, and how paternalistic and ignorant Western attitudes towards natives can be. There's a scene early on where the militant Karamakate blasts Theo's river guide, Manduca (Yauenkü Migue), because his tribe "submitted to the whites without a fight," and we are immediately primed for a betrayal. Then there's a charming scene where Theo and Manduca entertain some of Manduca's fellow villagers by performing a song and dance in their dialect around a campfire, and you can feel both the village's parents and children warming to the European; but the next morning, when he realizes they took his compass, he turns surly and condescending, telling Karamakate that they've been navigating by the sun and stars for thousands of years, and "...if they learn how to use a compass, that knowledge will be lost." "You cannot forbid them to learn," Karamakate says. "Knowledge belongs to all men."

There are sharp observations about the materialism and vanity of the Europeans (Theo insists on carrying all of his research with him in trunks and knapsacks, even when clambering over rocks alongside a river), moments of appalling but historically appropriate violence and terror, and many uncomfortable moments of interaction between the younger and elder versions of Karamakate and the would-be explorers who need his help. But the movie can't seem to leave well enough alone. It can't just show Theo in denial about his inability to let go of his possessions, it has to have Karamakate diagnose his condition in so many words. It can't let us grasp the magnitude of the older Karamakate's loneliness now that he's lost his culture; it has to orient it around a vast chalk mural that he's drawn even though he can't remember what the symbols refer to anymore, and have him discuss his condition at some length with Evan. This sort of thing is frustrating because in every other way, the movie is original in concept, remarkable in execution, and filled with characters whose motivations and personalities are developed with clarity and humor. 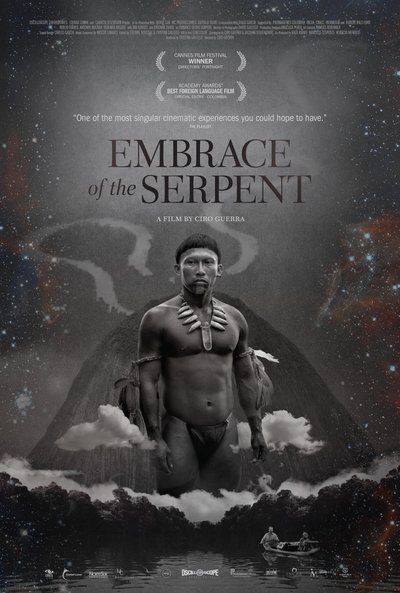 Writer (based on the diary by)