Why do romantic comedies make it so hard on themselves? All a good one really needs is charismatic stars whom the audience wants to see together, and a plot with the obligatory roadblocks the romantic duo can successfully navigate without breaking the spell of their chemistry. For a recipe with so few ingredients, Hollywood has made an incredibly large amount of bad dishes. The reason so many romantic comedies fail is that they are micro-managed to the point of madness. Something that should be as light as a soufflé is almost always served with the consistency of a brick.

"Elsa & Fred" is the latest brick soufflé thrown at an unsuspecting audience. This movie is so tone-deaf that it tries to wring charm from questionable stereotypes about senior citizens and minorities. The latter is so completely out of place that it gives "Elsa & Fred" an air of elitism that I assume was not intentional. The former drives the plot, and despite the presence of the extremely charming Oscar-winning actors Christopher Plummer and Shirley MacLaine, one cannot help but root for this couple to stay the hell away from each other. The pitch meeting must have been “it’s the typical bad romantic comedy…but with OLD PEOPLE!!”

For its senior-aged couple, “Elsa & Fred” presents a grouch and a compulsive liar, the latter of whom is so incredibly unlikeable that you root for the grouch to drive her away forever. At least the grouch has reason for his temperament: Fred (Plummer) is a recently widowed man whose shrew stereotype of a daughter Lydia (Marcia Gay Harden—another Oscar winner completely wasted here) treats him as if he’s gone senile. Lydia hires an African-American caregiver (Erika Alexander) for Fred. The caregiver’s '80s aerobics instructor look and street vernacular get insulted by Lydia, and, in one unfortunate scene, Alexander holds up a watermelon in close-up and without irony.

While Lydia represents the “those pesky young people are so ungrateful” subplot, Plummer hooks into these early scenes of resentment and bitterness, embodying them with a deeply internalized, unspoken suffering. You almost want his Garbo-like wish to be left alone to be granted, if only so he can reconcile the death of a wife he actually hated.

But this is a romance, so one must allow for the hope that someone will rouse Fred from his misery. Enter Elsa (Shirley MacLaine), Fred’s next door neighbor. Elsa is the type of character a bad film has to constantly remind you to like. She’s a liar whose lies would doom all but the most masochistic relationships. She lies to Fred about her marital status, her family and her health. She does this while trying to drag the distrustful Fred from his shell and into a world where he can trust without fear.

Neither the flighty, spirited characteristics of the youthful MacLaine nor the mama-bear fierceness of the latter-day “Terms of Endearment” Shirley could save Elsa from being an annoying device. Elsa puts Fred on a multi-step “process” to help “cure” him, but every time Fred steps forward in progress, one of her lies knocks him backwards with the force of a Mike Tyson punch. Elsa cleans things up by saying “trust me without reservations!” And Fred continues to trust her. It’s supposed to be romantic; it’s pathetic.

“Elsa & Fred” gets so desperate for us to love Elsa that it not only saddles her with an illness that will eventually kill her, it also introduces her husband (James Brolin) as a last reel plot development. Brolin gets an absurd speech that would put his son Josh’s peach-cobbler ramblings in “Labor Day” to shame. After reiterating every single reason why Elsa is toxic, Brolin says “don’t make the mistake I did in letting her get away!” You’ll want to yell “Don’t listen to Babs’s husband! Run, Fred, RUN!!”

Adding insult to injury, “Elsa & Fred” refers to “La Dolce Vita” in almost every other scene. It goes so far in its comparison to the superior Fellini film that it recreates the most famous scene from “La Dolce Vita”, complete with black and white cinematography. The intercutting of the smoking-hot, youthful Anita Ekberg with the much older (though still attractive) MacLaine mimicking her is the epitome of camp. And the scene of Plummer feeding a kitten yogurt with a spoon at Trevi Fountain should cause the cat-loving Internet to burst into flames.

But I digress. George Segal, Scott Bakula and Chris Noth show up on occasion in barely fleshed-out roles, and Wendell Pierce provides mild amusement as an accident-prone landlord. They’re given little to do, but provide mildly entertaining distractions. Segal in particular reminds us how good he is at stealing a scene.

Behind the camera, director Michael Radford and his cinematographer Michael McDonough make the most of “Elsa & Fred”’s New Orleans setting. The music by Luis Bacalov (“Il Postino”) is sweet enough to deserve a better movie.

Speaking of music, the sole moment of entertainment in "Elsa & Fred" occurs during the closing credits. Over his trademark piano playing, New Orleans legend Dr. John duets beautifully with Dee Dee Bridgewater. The song recaps the film’s dreadful plot in its lyrics, but the charismatic interplay between the singers is so good that it made me want to watch the movie they were describing. These singers know how to cook a romantic comedy soufflé. Save your money and buy the song, or better yet, go rent “La Dolce Vita.” 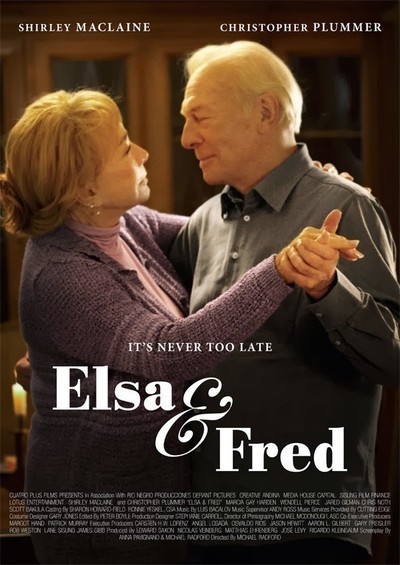