From almost the moment cinema was invented, directors have been drawn to the 17th-century fairy tale Bluebeard. Pioneer Georges Méliès did a version in 1901 (with some truly spooky effects). Alfred Hitchcock's "Rebecca" is a Bluebeard-inspired tale. So is "Crimson Peak." There was a witty modern version called "Bluebeard's Eighth Wife," starring Claudette Colbert and Gary Cooper. Catherine Breillat, born to tackle Bluebeard, made "Barbe Bleue" in 2009, exploring the story's undercurrents of passivity and sexuality. More recently, Alex Garland's extremely effective "Ex Machina" owes much to Bluebeard. The original author, Charles Perrault, father of the fairy tale, often wrote about women and girls in peril ("Little Red Riding Hood," "Cinderella," "Sleeping Beauty," "Bluebeard"). Writer-director Sebastian Gutierrez is the latest to tackle the rich implications of Bluebeard in his film "Elizabeth Harvest," bringing a modern horror-sci-fi sensibility to the story. The horror is already implicit. Gutierrez makes it explicit.

In the first scene, Elizabeth (Abbey Lee), a dreamy young woman in a wedding dress, is carried over the threshold by her husband, the much older Henry (Ciarán Hinds). The glass house he has brought her to perches in a mountainous isolated landscape. Elizabeth wanders around agog at her new surroundings, at the closet full of clothes fitted just for her. She submits to Henry's grunting sexual needs, staring at the ceiling with open flat eyes, and does her best to ingratiate herself with Claire (Carla Gugino), the mysterious "Mrs. Danvers" of the household, and Oliver (Matthew Beard), Henry's visually impaired son, who glides around noiselessly like a cat. The house is funereal and immaculate. Henry, a Nobel prize winner, warns her not to go into the room in the basement. Elizabeth disobeys, freaking out when she sees a row of cryogenic tanks, filled with her exact replica, submerged in a kind of amniotic fluid. Henry discovers her disobedience and chases her around the house with a huge knife.

The story loops back and repeats. Dylan Baker, a cop friend of Henry's, shows up on occasion, driving out to the house, asking questions, but other than that, we're stuck in the belljar with the members of the household. The characters' secrets pulse into the air, and at times the atmosphere is so over-charged the whole thing tips over into camp melodrama (and not the good kind).

The complicated structure of the script is made more so by Gutierrez's stylistic flourishes, some which work better than others. He uses split screens and single-color palettes, along with gigantic closeups of Elizabeth's startlingly blue eyes, fringed by wet eyelashes. The split screens are fun, intensifying the tension as we see Elizabeth hiding from Henry, and Henry in hot pursuit. The single-color scenes seem to signify "flashback", but it comes off as slick affectation. The house is beyond spooky and Gutierrez and his talented cinematographer Cale Finot explore the space with gliding cameras, and almost imperceptible zooms into a vase of flowers, an empty door, the fire in the fireplace. These are eerie choices, giving a sensation of emptiness and dread.

But the pace is glacial. There is so much explanation necessary to help us understand the basement room that Gutierrez throws in lengthy flashbacks, monologues, plus the discovery of Claire's private diary which details her backstory in a long voiceover sequence. As a character says in Noël Coward 's Hay Fever, "Talk, talk, talk. Everybody talks too much." Bluebeard taps into some pretty primal fears, and these elements are presented in a highly literal way. There's no room for the metaphoric, the emotional or symbolic. "Ex Machina" created a mood where issues of identity, womanhood, personhood, could be explored, all the things present in the original story. "Elizabeth Harvest" instead explains its own plot. This is a tough slog at 105 minutes.

Hinds is very creepy, a true madman, and Gugino does her best to fill in the character of Claire with overheated secret torment. Abbey Lee is mainly a fashion model, although she's done some film (memorable as one of the brides in "Mad Max: Fury Road"). Her resemblance to Mia Farrow calls up unfortunate comparisons to "Rosemary's Baby," another story about a helpless woman controlled by a sinister husband. Think of Farrow's submissiveness at the start of "Rosemary's Baby" and the amount of emotional territory she has to travel to get to Rosemary's final horrifying moment. Abbey Lee doesn't have the skill to traverse similar terrain. There's something mask-like about her face, appropriate at first since Elizabeth is a woman in a fog, but there are times when the mask holds her back, and shuts us out.

There's something queasily fascinating about the women in fairy tales. They have no political or economic agency. They are chattel, prey. But viewed another way, these women and girls seethe with disobedience and wild agency. They are forbidden to do certain things. They say, "Of course, honey, whatever you say" and the second they are alone, they go right ahead and do the forbidden thing. Pandora, Eve, Lot's wife, are blamed for the downfall of mankind. But without Eve's curiosity, there'd be no science, philosophy, intellectual inquiry. It's such a potent symbolic landscape. In "Ex Machina" you could feel Garland's urgent devotion to the movie's themes. The real lack in "Elizabeth Harvest" is it's not clear where Gutierrez's interest lies, why this story matters to him, what he's trying to say. 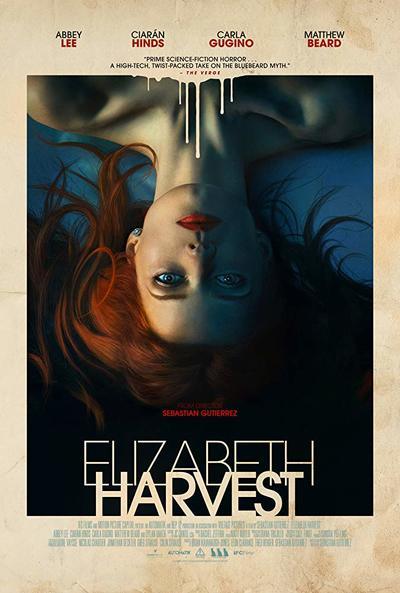