Seth Savoy’s “Echo Boomers” has a lot to say about millennials but nothing much of substance. Its characters are fueled by the inequality and idealism of our much debated, little listened to generation. But as the movie continues from its bombastic introductions, our heroes never grow beyond their initial talking points. Their stunted world view falls apart the longer you think about it, which given the script’s propensity towards Instagrammable mantras and self-aggrandizing pronouncements, gives audiences a lot of time to think about why something with somewhat of an idea turned out to be so rote.

As told to an author promising to tell his side of the story, Lance (Patrick Schwarzenegger) begins this story behind bars and recounts how he and a group of newfound friends turned from disenfranchised drifters into criminals. Lance’s cousin Jack (Gilles Geary) seems to have things figured out. He drives a Porsche and holds a job in the art world—or so he says. The details are shaky and before Lance is hip to what’s really going on, he’s roped into Jack’s chaotic world, where a group of similarly minded angry young people have banded together as a criminal group to wage war against the rich and enjoy the profits for themselves. Radicalized by campus activism and diminishing opportunities, these members of their generation pivot to art crimes and a string of destructive ransacking as a way to stick it to the Man—which in this case are the nameless one percenters who casually keep Van Goghs in their living rooms. But it’s not all fun and pithy spray painted messages. The group has to deal with the threatening presence of Mel (Michael Shannon), their shady retailer, who sells their stolen goods out of his shipping company. As egos and tensions grow, forces within and outside of the group threaten their lucrative hustle.

“Echo Boomers,” which really only brings to mind the phrase “Okay Boomer,” is a movie that showed up without having done its homework. It feels as if the characters, for all their die-hard loyalty to delivering a message to the rich, don’t really acknowledge the systemic forces that leave a veteran struggling with mental health without resources or a smart tech guy facing Silicon Valley’s increasing unemployment rate. The movie uses real newscasts or interviews to set its scenes and establish its characters—be they former Occupiers of the early aughts or a kid who can’t break into his field of choice—but then sacrifices these backstories to make way for a more conventional crime thriller template of heists gone wrong, stakes that get too high and ultimately, betrayal. There’s a little armchair psychology in the mix, explaining the anger in the group as the result of childhood traumas, but that too feels like a shallow understanding of what’s happening.

Although Savoy shares writing credits with Kevin Bernhardt and Jason Miller, it isn't enough to save characters from sounding like walking Tumblr missives. Lance originally describes the group as “artists of destruction.” At one point, the leader of the group, Ellis (a wooden-faced Alex Pettyfer) defends their actions by saying “We’re not just stealing. We’re sending a message.” Later on, Lance comes to this deep thought, “The best things in life are expensive.” Such obvious statements grow even more exhausting when you think that if these adults are so hellbent against the rich, why are they hoarding the profits for themselves, and blowing much of what they make on drugs, booze, and flashy cars, one of the ultimate symbols of status? There’s no selfless Robin Hoods in the ensemble, and in a way, they become the capitalist monsters they originally railed against. And that’s to say nothing of their appropriation of Día de Muertos masks, which if they were so painfully woke to want to do crimes they would have likely known about and possibly avoided. Perhaps the Anonymous/“V for Vendetta” masks may have been too on the nose.

Not only does “Echo Boomers” lose its script when it comes to its narrative choices, it isn’t even very clever when it comes to its visuals. Carlos Verón’s cinematography professes a messy slickness enhanced by the frenetic editing by Dean Gonzalez and Ken O'Keefe, which makes a bit more sense than much of the writing. Then there are a number of subtle-as-an-anvil cutaways that feel terribly amateurish, but my favorite may be when Lance introduces the couple in the group as their Bonnie and Clyde and the movie shows old newsreel footage of the shot-up bodies of the Depression Era bank robbers. The movie also painfully scribbles out Lance’s nonsensical list of rules in neon throughout the runtime, as if they weren’t terrible enough to listen to in his voiceover. To complete the package, Savoy goes for a climatic Scorsese slow-motion set to an old song, teasing us with memories of what a good crime movie can accomplish.

In “Echo Boomers,” Lance describes his co-conspirators as “they’d rather be dead than in the system.” Yet even this proclamation falls short of its promise, leaving us with a very silly movie that takes itself very seriously. “Echo Boomers” reduces a generation’s counterculture into threadbare stock criminals, delivering a lot of talk about how society has failed this group but little beyond its convoluted premise. As with the many trend pieces complaining about millennials spending too much money on avocado toast over home mortgages, “Echo Boomers” gets a lot wrong about the generation it wants to discuss. Maybe the filmmakers should have listened more. 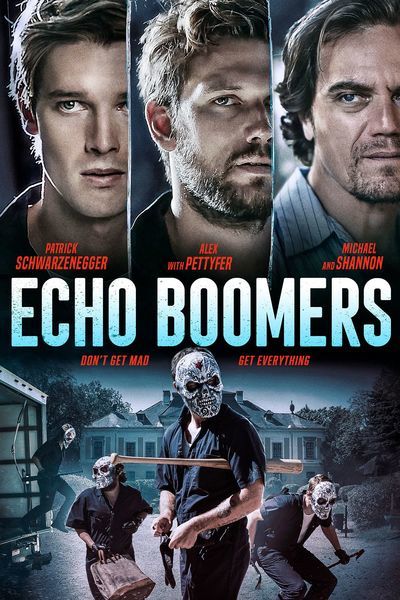 Rated R for drug use and pervasive language.