Henry Fonda is said to have come out of "Easy Rider" a confused and puzzled man. He had worked in movies for 35 years and made some great ones, and now his son Peter was going to be a millionaire because of a movie Henry couldn't even understand.

Where did those two guys come from, he wanted to know. What was their background? How did they set up that drug-smuggling deal? Where were they going? And what, oh what, did the movie mean?

I suspect many members of the Hollywood older generation believe, sincerely and deeply, that "Easy Rider" doesn't have a story, and doesn't mean anything, and that the kids are all crazy these days.

But in fact, director Dennis Hopper has done an old and respectable thing. He has told his story in cinematic shorthand, instead of spelling it out in dreary detail. Fifty years ago, Hollywood figured out that if you put the good guys in white hats you could eliminate 10 minutes of explanation from every Western. Hopper has applied this technique to the motorcycle movie. (He also has made a great film, but more of that later.)

Everybody "knows" that "Easy Rider" is tremendously popular with high school and college-age kids. But these kids apparently sprang into existence full-blown, and did not grow up or go to any other movie before they found this one. That's the way Hollywood sees it. Hollywood believes in magic.

In fact, the same kids who did "Easy Rider" were on dates in the drive-ins a few years ago when "The Wild Angels" and "Hell's Angels on Wheels" and all the other motorcycle pictures came along. When the Hollywood establishment was dismissing motorcycle movies as an unpleasant low-budget fad, the kids already knew that something was happening here. Because the Hell's Angel, like the gangster, was a bad guy produced by the society he victimized and was tied to it by a love-hate relationship that created some really neat sex and violence scenes.

And someday it was inevitable that a great film would come along, utilizing the motorcycle genre, the same way the great Westerns suddenly made everyone realize they were a legitimate American art form, "Easy Rider" is the picture.

In all the exploitation-type motorcycle movies, the central characters were outlaws from conventional society. They rejected the establishment values (but took them seriously enough to attach importance to putting them down). They used drugs and beat up each other, and cops hated them on sight. There was usually an ounce of worth in the hero, however.

Actors like Peter Fonda and Adam Roarke played gang leaders in the tradition of Brando. But, unlike Brando (in "The Wild One,") they usually repented when they saw the suffering they'd caused. They didn't repent all over the place, but they did repent, and if you looked close you could catch them at it in the last scene.

"Easy Rider" takes the gang leader (Fonda) and condenses his gang into one uptight archetype (played by director Hopper.) It takes the aimless rebellion of the bike gangs and channels it into specific rejection of the establishment (by which is meant everything from rednecks to the Pentagon to hippies on communes).

Fonda and Hopper specifically break with the establishment by smuggling cocaine across the Mexican border; that's a no-no. But during most of the picture they have cash money hidden in their gas tanks, not dope. They sold their dope to the establishment (represented ironically by rock tycoon Phil Spector in a Rolls-Royce).

They sold out, that is. And now they want to go to Florida and retire.
So Fonda and Hopper the dope-smugglers are symbols of every earnest, hard working, law abiding, middle-class wage-slave selling his integrity to the establishment every day. (Whether you believe this is immaterial to the symbolism, which works anyway.)

But it's hard to identify with the Fonda and Hopper characters. So Hopper and his co-writers Fonda and Terry Southern write in a brilliant character, Old George (played magnificently by Jack Nicholson). And when this alcoholic, tragic ACLU lawyer from a small Southern town enters the picture, suddenly that's us there on the bike with Fonda. And the movie starts to work.

If you follow the story closely in "Easy Rider," you find out it isn't there. The rough-cut of the movie reportedly ran over three hours, and Hopper edited it to a reasonable length by throwing out the story details and keeping the rest. So the heroes are suspended in an invisible story, like falcons on an invisible current of air. You can't see it, but it holds them up.

All of this divests a motorcycle movie of its weak point (the story) and develops its strong point (the role of the self-proclaimed rebel in a conformist society). It's not just bike freaks who get in trouble when they challenge the establishment -- it's everybody, even Old George.

And yet, "Easy Rider" suggests, it's not as simple as that. We almost forget that the Fonda and Hopper characters have also sold out. Victims can sell out just as well as their persecutors. They sold out because what they were trying to be was the mirror image of the rednecks in the truck, and neither life-style is healthy. And so there they were, their gas tanks stuffed full of bribes from the establishment, and you remember hearing somewhere that, in the South, "easy rider" is slang for a prostitute's lover. 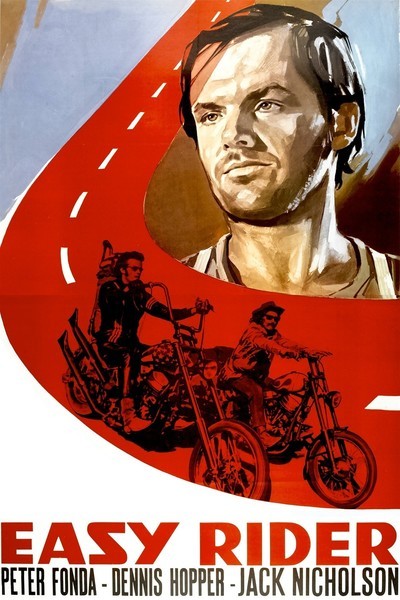