It’s hard to tell if there’s too much plot or not enough in the new horror-drama “Earwig,” a lucid, dreamy melodrama about a girl with ice teeth and her cranky middle-aged caretaker. To be fair, director Lucile Hadžihalilović (“Evolution,” “Innocence”) and her co-writer Geoff Cox don't strictly adapt Brian Catling’s source novel, though that’s also maybe their movie’s biggest shortcoming. The rich audiovisual textures and details that make “Earwig” look and sound like a live-action painting also make you want to simultaneously feel more and know less about Mia (Romane Hemelaers) and her troubled minder Albert (Paul Hilton).

Mia and Albert’s fraught relationship is eventually juxtaposed with a related subplot involving Celeste (Romola Garai), a traumatized barmaid, and Laurence (Alex Lawther), her officious partner. But the well-articulated parallels of these two storylines eventually draw too much attention away from the movie’s other attractive qualities, like composer Augustin Viard’s eerie, minimalistic score and cinematographer Jonathan Ricquebourg’s gorgeous impressionistic close-ups. So while “Earwig” often threatens to slip into a potent and chilly sort of dream logic, its creators never stop explaining we’re looking at and why their experiences are stacked on top of each other.

One reason for the movie’s uneasy blend of surreal and novelistic storytelling: its primary focus on Albert’s stuffy, disassociated point-of-view. He scowls and fusses over Mia as he prepares her meals—milk and mashed potatoes, since she can’t chew anything tougher—and draining the spit valves that flank her elaborate head-gear. Mia wears dentures that Albert prepares for her using the saliva that he collects from her mouth. He then freezes her spit and shapes it into dentures using a mold of Mia’s lower and upper jawline.

Mia and Albert’s lives are initially defined by this and other stifling rituals, until Albert’s mysterious benefactor calls to say that Albert should prepare Mia for delivery to parts unknown. Albert tries to stifle his visible distress—his patron tells him that his services will soon no longer be needed—but only winds up running into his problems at a nearby bar, where he encounters Celeste and a mysterious stranger (Peter Van Den Begin). This stranger asks Albert if he’s ever wondered what it’s like to be somebody else. That question and its loaded implications split “Earwig” in two parts, the first of which poses a question that the second neatly answers.

Most of “Earwig” concerns Albert’s inability to feel or understand anything beyond himself. He and Mia are united by the same uneasy nurse/patient bond that he later struggles to understand from Celeste’s point of view after a sudden act of violence creates an unexplained psychic connection between Albert and Celeste. Albert can’t relate to Mia, possibly because he spends so much time looking after her. But Albert sees Celeste and that bothers him for reasons that are mostly explained by movie’s end.

The warm autumnal colors of "Earwig," mostly amber brown and pea-green, suggest the comforting decadence of the paintings of Claude Monet and the comics of Enki Bilal (the work of Danish painter Vilhelm Hammershøi are an acknowledged influence). In this context, the creak of wooden floorboards and the crinkle of yellowing newspaper are as reassuring as the downturned curl of Albert’s frown, or the throbbing tones he creates by circling one finger around the mouth of a crystalline drinking glass.

“Earwig” is delicate and sometimes beguiling, but its view of Albert and his world is consistently clear. Celeste and Mia never stray too far from the men that control their daily routines, because that’s what Albert and Laurence are there to prevent. And Albert never shows us what exactly about his past scares him, because that’s what Mia and Celeste are there for. A mysterious woman (Anastasia Robin) lurks around the periphery of both stories, and her presence says more about Albert than anybody else.

There are otherwise a few good reasons to see “Earwig,” which might be Hadžihalilović's most accessible feature to date. She’s a keen image-maker and her way of seeing things has clearly inspired her collaborators, including Viard, whose ethereal, tone-heavy score was notably arranged by Australian musician Warren Ellis. It would be a mistake to dismiss “Earwig” outright given how enchanting it often appears on a scene-to-scene basis.

Still, there’s something essential missing from “Earwig” and it’s not for want of inspiration or creativity. Hadžihalilović's latest is both too hazy to make a great adaptation and too focused to be genuinely dream-like. 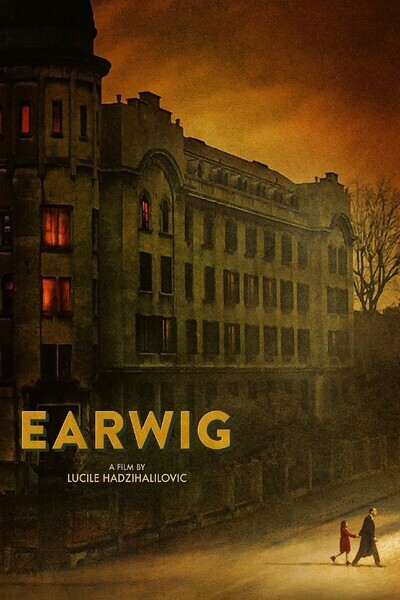 Marie Bos as The Receptionist

Isabelle De Hertogh as The Concierge

Michaël Pas as The Doctor

Writer (from the novel by)