There’s a decent movie buried somewhere deep in the willfully dull “Earthquake Bird,” now on Netflix. If one looks hard, you can see the themes of the story that were almost certainly given depth in the novel by Susanna Jones that’s lacking here. It takes great effort to find what interested director Wash Westmoreland and company in the source material in the first place, but it feels like a project that reaffirms something I’ve long argued: just because something works in one medium doesn’t mean it will in another.

At its core, “Earthquake Bird” is a mystery. Any movie that literally includes footage featuring the king of late '80s and early '90s thrillers Michael Douglas ("Black Rain" in this case) in an early scene and uses an interrogation-flashback structure has at least some desire to thrill and intrigue you on a basic level. One of the main problems with the film is that it’s barely a mystery. At times, it’s reminiscent of “Burning” in the way that film had a mystery and potential murder in the backdrop, but it used them to tell a greater story about culture and gender and privilege. The problem is that Westmoreland doesn’t invest enough in the 'greater story' here, giving us a dull protagonist and a flat leading man and never figuring out the tone. This isn’t drama or thriller—it doesn’t have enough stakes for either.

Alicia Vikander plays Lucy Fly, an expat living in Tokyo and working as a translator. Lucy is an odd duck, one of those people with a vacant stare that can be a little off-putting and suspicious. We’re supposed to suspect her when the cops show up at her office with some questions about a woman named Lily Bridges (Riley Keough). Lucy and Lily were roommates and friends, but Lily’s body has just turned up. What does Lucy know? The film plays out in flashback, becoming a romantic drama for a bit before returning to the story of what exactly happened to Lily Bridges.

We learn that the quiet, shy Lucy met a photographer named Teiji (Naoki Kobayashi), with whom she started a relationship. Teiji seems more comfortable behind the lens, and the early scenes of romance between are about as passionate as watching paint dry. One of the main problems with “Earthquake Bird” is that we never quite get invested in the relationship between Lucy and Teiji, which could arguably be a byproduct of the unreliable narrator telling the story to the authorities but feels more like just bad filmmaking and acting. Lucy is a mystery, but not in a way that builds intrigue. There’s a difference between a character who is distant because she carries secrets or trauma yet to be revealed, and a character who just registers as underwritten and flatly performed. Lucy is the latter.

Thank God for the always-interesting Riley Keough, who gives her too-few scenes some life. Yes, Lily is supposed to be the yin to Lucy’s yang, the hot to her cold. And, of course, the new friend in their life means a probably love triangle after Teiji notices Lily too. But could “Earthquake Bird” be that simple? The story of a woman who killed her friend after that friend turned into a romantic rival? Of course not, and most people will see the twist of “Earthquake Bird” coming from pretty far away, presuming they care enough to try and figure it out.

The most interesting aspects of “Earthquake Bird” are the most frustratingly underdeveloped. Lucy considers herself human bad luck. She’s been around tragedy often and blamed herself for that tragedy. This is the kind of inner monologue and character development that’s easier on the page than on the screen, and Westmoreland gets to it too late in his story, unsure how to balance the character of Lucy with the mystery of Lucy. There are also weak elements about the mystery of foreign culture in the dynamic between a British woman, American friend, and a Japanese man. Again, the cultural issues feel like something likely richer in the source, but just window dressing here on a really boring window.

Worst of all, “Earthquake Bird” is just dull. A mystery like this needs to simmer to a point, but there’s so little rising action here that your mind will wander, especially while watching it on a streaming service with the biggest catalog in the world. Like its shy protagonist, "Earthquake Bird" almost feels like it’s happy to just get lost in the crowd. 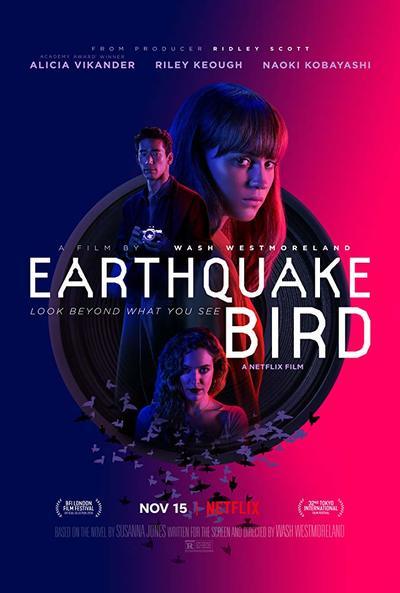 Rated R for some sexuality, full nudity and brief language.