I have a weird confession. I am watching "Earth to Echo," this utterly shameless sci-fi fantasy rip-off of "E.T." and almost every kid-friendly film that Steven Spielberg has ever produced and/or directed—or even just thought about producing and/or directing. The premise? Three pubescent boys in a Nevada subdivision that is about to be demolished to make way for a freeway (yeah, right, wink, wink) suddenly receive a weird image on their smartphones the day before they must move.

One of these social misfits, whose tech savvy and amusing awkwardness make up for what they lack in cool, announces that he has determined the exact nature of this mysterious object. Now, to me, since it is shaped like an inverted triangle with rounded edges, it looks similar to those diagrams of the female reproductive system that often show up in the examining rooms of gynecologists.

It has to be a uterus, right? Complete with ovaries and Fallopian tubes. OK, I did go for my annual exam recently and such matters are in the forefront of my mind, so don’t judge me too harshly. But, suddenly, I was hoping that this was going to be quite a boldly original coming-of-age story.

Not a chance. Instead, the blob on their phone ends up being just a map to a desolate area in the desert where a battered, wee, owl-like alien covered in what appears to be metal armor has crashed.

Given that it beeps, chirps, repeats sounds and is incredibly cute, this visitor from outer space (dubbed Echo after suggestions of Space Ninja and Master Blaster earn a thumbs-down) is a descendent of Tribbles, Gremlins, the "Short Circuit" robot No. 5, "WALL-E," Bubo from 1981’s "The Clash of the Titans" and maybe even Chucky the psycho doll. All I know is, Furbys definitely have grounds for a copyright lawsuit.

The constant plundering from such sources as "Goonies," "Stand by Me," "Close Encounters of the Third Kind," "Poltergeist" and "Super 8," a superior Spielberg homage in itself, obscures the one original twist that "Earth to Echo" does bring to the table.

We are witnessing the birth of selfie cinema.

On the surface, it seems "Earth to Echo" is simply the first found-footage film, a money-saving format popularized by 1999’s "The Blair Witch Project" and capitalized on by the more recent "Paranormal Activity" franchise, tamed down for grade-school audiences. And video cameras are duly employed—handheld, attached to bikes and even one tucked inside a pair of horn-rimmed nerd glasses that might have been borrowed from Michael Caine circa "The Ipcress File."

The trio of best buddies—wannabe filmmaker and big mouth Tuck (Brian “Astro” Bradley, who apparently was on "The X Factor"), comical gadget whiz and self-described “acquired taste” Munch (Reese Hartwig) and earnest emo foster child Alex (Teo Halm)—are not just recording their last night together to share their incredible escapades with the world on YouTube after they ride their bikes 20 miles to check out where the map leads. They are also offering proof that they aren’t invisible, despite the way the bullies and popular students in school mistreat or ignore them, by making themselves the stars of their movie. Isn’t that why people post their pouty self-portrait poses on Facebook? To prove that they matter?

Much of the movie is devoted to the guys helping Echo find missing parts so he can, like E.T., go home. They use a sleepover as an excuse to stay up all night while going to various locales as suggested by their alien buddy. They visit a barn, a pawn shop, a bar and a high-school party, with varying degrees of disruptive results. They also drive a car for the first time with the aid of Googled instructions.

Now, is it just me or is this not a good idea in a film aimed at impressionable youngsters under 16? Especially if there isn’t going to be an intergalactic bird on board who can dismantle a truck and then reassemble it so it doesn’t hit you head on (admittedly, a pretty neat visual trick).

Echo can be entertaining in his reactions and the relationship between the boys at first feels organic and unforced. But there are a few illogical detours. What fuddy-duddy parents in this day and age spend an evening forcing their middle-school-age daughter to wear a pink prom-style party dress while tutoring her on etiquette? Shouldn’t they be watching a TV show with "SVU" or "CSI" in the title instead? Sounds like the authorities should be alerted to this kind of Miss Manners-inspired abuse.

Echo at least provides a reason for pretty classmate Emma (Ella Linnea Wahlestedt), whom Munch refers to as Mannequin, to escape and join the three amigos. Of course, this token girl mainly serves to show the boys a thing or two about breaking the rules and being brave without quite being a fully realized character herself.

Meanwhile, save for a scowling road-project construction worker (Jason Gray-Stanford), who obviously isn’t one because he is behaving in a manner not unlike the government agents who go after E.T., adults are given short shrift. Mainly, they are oddly lackadaisical about their parental duties and generally clueless (a sleepover the day before a move is another bad idea). It was nice to see Gray-Stanford—who was Lt. Randy Disher on the now-defunct "Monk" detective series—as the token meanie. Sadly, I don’t think his role is substantial enough to be described as acting.

What ultimately should have been borrowed from Spielberg’s oeuvre but isn’t is a sense of wonder and achievement whenever characters come in contact with the unknown or overcome a great obstacle as a team. Imitation should be flattering, not flattening. 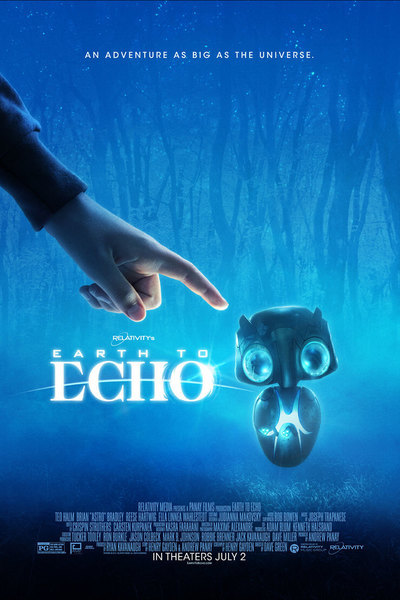 Rated PG for some action and peril, and mild language