“Dumb: The Story of Big Brother Magazine” is a heartfelt ode to a pioneering magazine in the ‘90s that recognized that skateboarding culture was about much more than just doing tricks or having the coolest art on your board. Built as a counter to traditional skateboard mags like Thrasher, Big Brother gave birth to a gonzo worldview that would eventually lead to the creation of MTV’s“Jackass,” which included several of the reporters from the publication and wildly influenced all of pop culture. For a documentary about form-breaking artists, the film is surprisingly straightforward, following a bit too much of a “then this happened” structure, but there’s an undeniable likability to these memories of barely-contained anarchy that should satisfy both those who remember Big Brother and people who have never heard of it. The film premieres on Hulu tomorrow, June 3rd.

In much the same way that “Drunk Stoned Brilliant Dead” chronicled the rise and fall of National Lampoon through the memories of the key players involved in the magazine, “Dumb” charts the history of Big Brother and its “high-functioning pieces of shit.” At first, Big Brother was a more anarchic alternative to straightforward skateboarding magazines, but then it began to stray from even its base subject matter. As someone says in the doc, “You can’t write about skateboarding, who gives a fuck?” So, it became a magazine about the culture, mostly joking and playful and risk-taking. Sure, there’d be some cool photos of skateboarders doing tricks but there would also be joke articles like when they took Slayer to Disneyland, covered a skating event by just hanging with a homeless girl nearby, and pulled various pranks on staff members. Big Brother also contained copious amounts of two things that its target demo, young men, care deeply about: boobs and drugs.

It was the law-breaking elements of Big Brother that would often get it in trouble. They did a spoof of “How To” articles about how to kill yourself that got some national attention, and even produced a “Kids Issue” (note: no apostrophe—not for kids but about kids) that really made people angry as it interviewed skateboarding kids about whether or not they would have sex with their mothers to be better skaters or if they knew what a scrotum was. The interesting thing is that none of these controversies took them down. In fact, Larry Flynt would buy the magazine, and publish it under his label until skateboarding basically became too popular in the ‘00s again for a counter-culture magazine to survive—it was culture-culture.

Patrick O'Dell's film assembles all the major players for a series of interviews, including the main voices behind the magazine like Jeff Tremaine and Chris Pontius, as well as the players who would break off and form “Jackass” like Johnny Knoxville and Steve-O, whose first appearance in the magazine included the caption “Steve-O is pathetic,” in a story about him lighting his head on fire. The best of the stories have the feel of a group of friends sitting around at a party, reminiscing about the most memorable moments of their lives over a few beers. It's almost worth watching just for the shattered look on Spike Jonze's face as he speaks about the bit he can never forget: the Poocano.

Big Brother never made a lot of money—it was losing it before Flynt bought it—but it was formally groundbreaking. I love that the issues would each have a different structure and often a different size in those early days. One even came in a cereal box. That kind of publishing playfulness is gone in an era of YouTube in which everything is delivered in the same format. The best elements of “Dumb” get at how these guys weren’t just morons having fun—they were artistic, creative, and funny. Jonah Hill even stops by to give the Big Brother team credit for forming his sense of humor.

Having said that, “Dumb” is pretty traditional when it comes to form, and it disappointingly rushes through its final chapters, quickly mentioning “Jackass” and then the unexpected end of the magazine. I wanted to know more about how the skateboarding culture changed after Big Brother and how we still see its influence in it today, and more about where the key players are now. I guess Big Brother ended with its fans wanting more, but the movie didn’t have to as well. 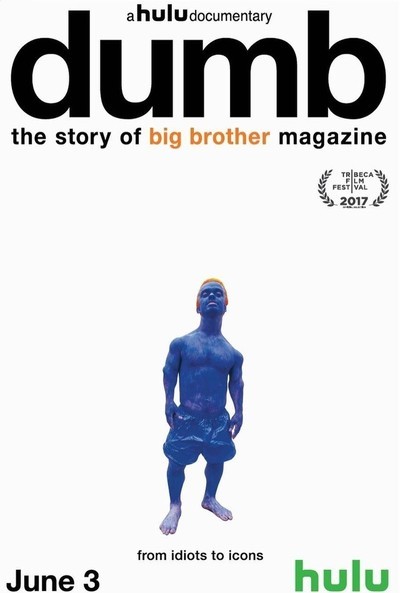