I'd like to think the Dark Ages looked something like “Dragonslayer” all fearsome and muddy and overcast most of the time, and that their inhabitants walked around in a constant state of fear that something unspeakably evil was just about to eat off their ear. “Dragonslayer”’s vision is more convincing than the Dark Ages created by John Boorman in “Excalibur,” with everybody riding around in suits of armor that wouldn't be invented for another seven hundred years.

The real Dark Ages must have been a time of ignorance, tyranny, and superstition. And its heroes must have been something like the two young heroes of “Dragonslayer,” Peter MacNicol and Caitlin Clarke, both looking about fifteen years old. In a time of disease, plague, and epidemic, fifteen was old.

Here is a movie with the courage to be grungy. Dragons live in smelly lairs deep beneath crumbling mountains, and to reach them you have to cross lakes of fire and somehow avoid being eaten alive by little baby dragons. The mission in this movie is a simple one, as all fairy-tale missions must be: Galen, a young sorcerer's apprentice (MacNicol) must travel to a faraway kingdom and kill a fearsome dragon who holds the countryside under its fiery scorn. The ruler of the kingdom has meanwhile instituted some stopgap measures. He holds a lottery every year involving all the virgins in his kingdom, and the unlucky virgin who loses the lottery is sacrificed to the dragon. Galen, the dragonslayer, vows to save the virgins by killing the dragon. (There are easier ways of saving a girl from being sacrificed as a virgin, but they didn't call these the Dark Ages for nothing.) Before he leaves on his mission, Galen is inspired by the grave words and magical death of his teacher, Ulrich the Sorcerer (Ralph Richardson, in an absolutely wonderful performance). On his way to the far-off kingdom, he meets a youth named Valerian (Caitlin Clarke), who turns out to be a girl disguised as a boy so that she can avoid being drafted in the lottery.

The scenes involving the dragon are first-rate. The beast is one of the meanest, ugliest, most reprehensible creatures I've ever seen in a film, and when it breathes flames it looks like it's really breathing flames. Its lair, its flaming lake, and its monstrous attacks on the population are also well handled. The real star of the movie, indeed, is the production designer, Elliott Scott, who created the look of this world. (The special effects were produced at Industrial Light and Magic Inc., which is George Lucas's shop in Marin County, California.)

If the movie has a flaw it is in MacNicol's performance, which is so feckless, cheerfully adolescent, and untextured that he could almost be a surfer caught in a time warp. MacNicol isn't bad in the role, mind you, just awfully cheeky. But then maybe dragonslaying is a young man's trade, and when you grow old and wise and have a long beard and are the sorcerer, you've learned enough to send your apprentice to kill the dragon. 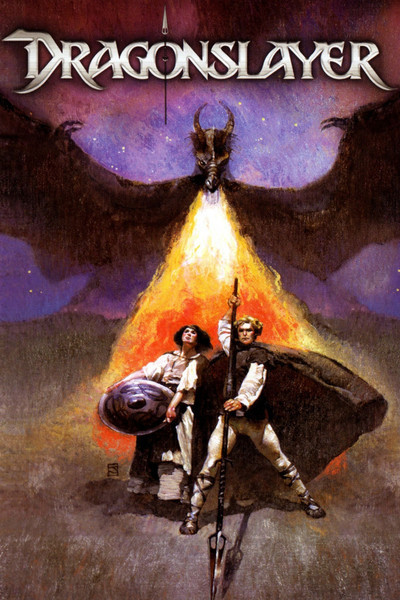