The first round of the 2013 NFL Draft on ESPN was watched by more than 6 million people. It’s an amazing number when one considers the history of a process in which winners and losers won't be defined for years to come. These are viewers, most of them diehard fans, engaged in a prospect, a dream, a chance for a better future for their team. Will their first-round pick be Andrew Luck or Ryan Leaf? Every decision is analyzed to the point of exhaustion as the popularity of the NFL is rarely more pronounced than in the fact that people are more interested in players who might hit the field in four months than those actually playing hockey, basketball, and baseball that very day. And it creates a pressure cooker atmosphere for those actually tasked with trying to separate the Leafs from the Lucks. Rabid fans make for tense executives. When Donovan McNabb was drafted over Texas phenom Ricky Williams in the 1999 draft, Philadelphia almost collectively lost its mind. Make a mistake at the draft and you might not be around as long as the player you just picked.

The “War Room” environment of decision-making on the day of the NFL draft was too enticing for Hollywood to avoid for long, and so the star-studded and cameo-heavy “Draft Day” arrives to offer viewers a behind-the-scenes look at how an NFL team can be broken or salvaged with just a series of negotiations and player assessments. Both too “inside baseball” for non-NFL fans to care and not nearly character-driven enough at the same time, Ivan Reitman’s film is cluttered, noisy, and often nonsensical. Reitman lacks confidence in the script by Rajiv Joseph & Scott Rothman (and probably should) and so he uses more split-screen than an episode of “24” in an attempt to make a flat story pop.

Sonny Weaver, Jr. (Kevin Costner) is having the kind of stressful month that only happens in the movies. He’s the general manager of the long-suffering Cleveland Browns, and has to choose between a hothead linebacker named Vontae Mack (Chadwick Boseman) and a troubled running back named Ray Jennings (Houston Texans star Arian Foster) with the team’s #7 pick. Sonny’s namesake was the beloved coach of the Browns for years and just passed away in the last week. Because grief over his father’s passing, job tension, and the draft pick weren’t enough for the screenwriters, the film opens with the revelation that Sonny’s girlfriend Ali (Jennifer Garner) happens to be pregnant. Of course, Ali works with Sonny and their romance has been (relatively) secret.

Not enough movie for you? Sonny’s day becomes significantly more intense when the Seattle Seahawks call and offer to trade down their #1 pick to the Browns. Weaver knows he needs to make a splash (and is literally told as much in a horrendously-scripted scene with his boss, Frank Langella’s Anthony Molina) and so he chooses to trade his future for his present, giving the next three first-round picks to Seattle for the chance to draft Wisconsin superstar Bo Callahan (Josh Pence). His coach (Denis Leary) loses his mind and Sonny spends the rest of the day trying to figure out how to turn his draft around…and his life, of course.

“Draft Day” is well-cast. Costner has the world-weariness of a man losing sleep over college kids and job security. Langella and Leary know how to push the right buttons when it comes to turning up the heat on our protagonist. Supporting roles feel well-considered, including scene-stealers like W. Earl Brown, Terry Crews, Sam Elliott, and Ellen Burstyn.

And yet all of these interesting performers can't save a dull script. To work, “Draft Day” needs the kind of witty dialogue and snappy energy that Steve Zaillian and Aaron Sorkin brought to “Moneyball” but the screenwriters mistake constant activity for actual screenwriting. Everyone serves a plot purpose in this cluttered tale instead of playing an actual person: "the girlfriend," "the coach," "the mom," "the agent," "the owner," and so on. They are archetypes and often fail to feel realistic even in that regard. Langella’s Art Modell riff (it’s no coincidence he has the same initials as the legendary Browns owner who moved the team to Baltimore in the ‘90s) is a caricature, Burstyn pops up just to manipulatively tug at heartstrings, and the romance between Costner & Garner contains zero chemistry.

As if he could tell that he had a shallow script, Reitman does his best to make it all seem more interesting than it is with visual tricks. Characters cross split screens, creating a truly odd aesthetic in which it looks like people in separate cities are sharing the same space while talking on the phone. The on-screen ticking clock counting down to the draft, the pomp and circumstance of NFL logos every time a new team comes into the narrative; these are the kind of filmmaking tricks that might have enhanced a quality script but feel like a lot of window-dressing with this one. In essence, it’s not dissimilar to what ESPN does with the actual draft, pumping it up with fanfare, high-tech graphics, and on-screen stats to give the viewer the impression they’re watching something truly important.

What “Draft Day” misses is that the reason 6 million people watch the actual draft is because it’s merely the prelude to the story of their team and possibly their new favorite player, and not the whole story in itself. We buy into the dream because of what it could mean for our sports fandom. The movie about this phenomenon clutters that hope with too many characters involved in uninteresting (and often unbelievable) subplots, dragging the high that true sports fans feel on draft day to the ground. 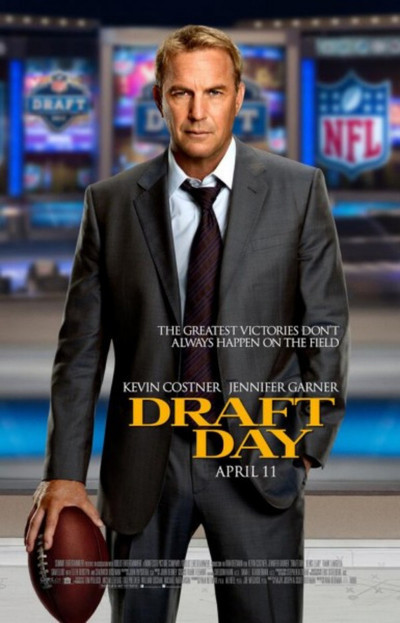